VANCOUVER — Just a few weeks ago, coach Marc Dos Santos couldn't pinpoint what had gone wrong with his Vancouver Whitecaps.
0
Aug 18, 2019 2:12 AM By: Canadian Press 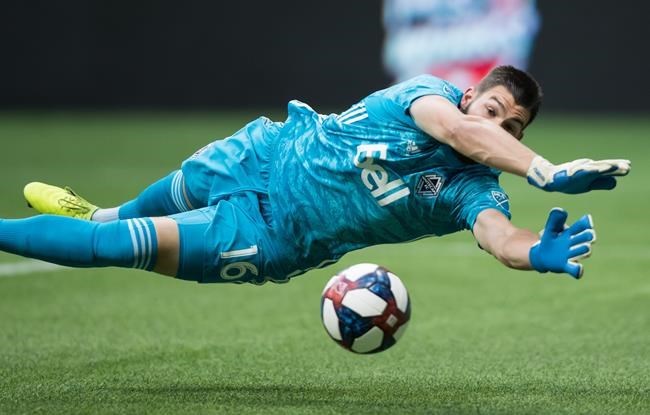 VANCOUVER — Just a few weeks ago, coach Marc Dos Santos couldn't pinpoint what had gone wrong with his Vancouver Whitecaps.

Now he's short on answers when asked why the squad has suddenly changed form again, posting a 1-0 victory over Wayne Rooney's D.C. United on Saturday.

The 'Caps (6-12-9) now have seven points in their last four games, but Saturday's contest marked their first home win since beating FC Dallas 2-1 on May 25.

The team continues to linger near the bottom of the Major League Soccer standings. While their playoff hopes look dim, the squad will continue to play with the same mentality and intensity until it's officially eliminated, Dos Santos said.

"There's no sign of this team giving up." he said. "We don't see a sign of guys head down and giving up. And we're to keep going as long as it's possible. We're not giving up."

Despite the final score, D.C. (10-8-9) out played Vancouver Saturday, dominating 64.4 per cent of possession across the game. United also outshot the 'Caps 24 to eight, though just two of those shots were on target.

The Whitecaps showed grit, fending off an onslaught after Yordy Reyna scored the game's lone goal in the 18th minute.

Russell Teibert set up the play, deftly guiding the ball through traffic and dishing it off to Reyna at the top of the box. The Peruvian striker let a shot fly and beat Hamid at the bottom left corner of the net.

The goal was Reyna's fifth of the season. Teibert was credited with the assist.

D.C. nearly retaliated with a goal of their own a minute later when Ulises Segura got a right-footed shot off from the centre of the box.

"We did well  playing with the lead, actually. We did well to not just sit and wait for them to come. We kept playing like it was 0-0," said Crepeau, who made two saves for his fifth clean sheet of the season.

D.C.'s Bill Hamid stopped one of the two on-target shots he faced.

The fact that the shutout came against soccer superstar Wayne Rooney did carry a little extra weight, Crepeau admitted.

"Any clean sheet, it feels amazing," he said. "It's about getting three points and after that, it's getting a clean sheet. And after that, if it's against Rooney, well, that's even better. It's a great evening."

Saturday marked Rooney's first visit to B.C. Place. The crowd of 22,120 erupted in a mix of boos and cheers every time the former captain of England's national team touched the ball.

It's unlikely the 33-year-old will play in Vancouver again. Earlier this month, he committed to returning to the U.K. next year and joining Derby County as a player coach.

"We were by far the better team, created the better chances," he said. "Very unlucky to not get anything out of the game."

There was a vigorous applause in the 74th minute when Rooney came off the field for Ola Kamara. The 33-year-old appeared to exchange some heated words with an official along the sideline before heading to the bench.

Rooney told reporters that he feels the officiating needs to improve in MLS because he's seeing the same missed calls game after game.

"That's my opinion. I'm entitled to my opinion," he said. "All I'm asking for is a bit of protection."

Next up, the Whitecaps will travel to San Jose to play the Earthquakes next Saturday.

NOTES: Whitecaps defender Jake Nerwinski left the game in the 50th minute with a right ankle sprain. He was replaced by Doneil Henry. ... Tosaint Ricketts made his debut for the 'Caps, coming on for Fredy Montero in the 78th minute. The Canadian striker signed with the club earlier this month after playing most of the year in Lithuania. ... Saturday marked a return to Vancouver for D.C.'s Felipe Martins. The Whitecaps traded the midfielder to United earlier this month for targeted allocation money and a 2020 international roster spot.