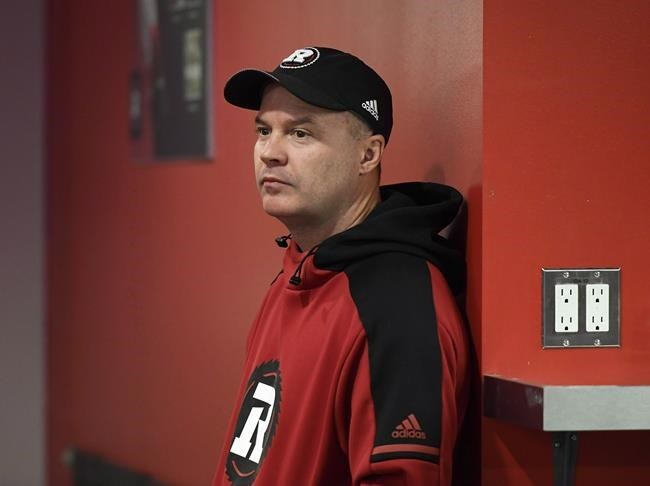 The Redblacks (3-5) look to get their sputtering offence going Saturday when they host the East Division-leading Hamilton Tiger-Cats (6-2).

Ottawa sits dead last in the CFL with a time of possession of 25:32, and its net offence of 304.4 yards per game is the worst in the league as is its 5.3 average yards per play. When the Redblacks have managed to get the ball, they have struggled to sustain any kind of momentum with a league-worst 51 two-and-outs.

"It's mainly on my shoulders. We just have to finish drives and take care of the ball and execute the plays as coach calls them," said Ottawa quarterback Dominique Davis, who has thrown a league-high 15 interceptions.

"I'm always hard on myself if we win or if we lose," he added. "I just look at it as a learning experience and try to correct the mistakes from the week before."

"Everybody on offence knows exactly what we're doing and they can do it with speed and tempo and confidence and then you start building momentum that way," Campbell said. "On the flip side our defence is going to get some two and outs so we can get our offence the ball more often."

The offence might improve if the Redblacks could get the ball in Brad Sinopoli's hands more often. The veteran receiver, who posted four consecutive 1,000-plus yard seasons, has just 311 yards on 31 catches so far this season.

"I never really worry about the numbers," Sinopoli said. "As a player you just want to be involved as much as you can and when that doesn't happen you're disappointed in yourself and you're maybe trying to figure out what can I do better, what can I change, but at the same time it's football.

"There's a lot of different factors that come into play. You have to ride the wave and make the play when the ball comes your way."

Campbell agreed that Sinopoli has been under-utilized, but said that other offensive weapons have been as well.

"We're not being productive enough as a whole and football really is the ultimate team game and that you have to get 12 guys working together," Campbell said. "When that happens all of a sudden Brad's stats look like they normally will.

Mossis Madu will be back in the lineup as John Crockett is still dealing with some minor ailments.

Ottawa has had success when they can run the ball and Madu is looking to keep the trend going.

Last week in a 16-12 loss to the Edmonton Eskimos, Crockett rushed for 85 yards in the first half and Ottawa led 12-10, but touched the ball just four times in the second half for four yards.

"Earlier in the season when we were having success we were running the ball," said Madu. "In each drive and it gets going more and more we run the ball and we have success. There's been games where we go two and out and it's because we're not running the ball well and collecting first downs."

Hamilton is coming in off a great 35-34 comeback win over BC after they trailed by 15 points with under four minutes remaining. It also marked Dane Evans' first win as a starter.

Historically Ottawa holds the edge over Hamilton having won eight of 13 since 2014, including all four games last season.

MAKE IT STOP: Ottawa comes in having lost its last three at home. They haven't lost four in a row at home since their expansion season when they dropped five straight at TD Place.

TAKE IT TO THE BANK: Hamilton receiver Brandon Banks recorded his third game of 100-plus yards last week and has scored eight touchdowns this season. Containing him will be key for the Redblacks.

KICK IT: Redblacks kicker Lewis Ward extended his CFL record to 69 straight field goals. His streak is now 30 more than the next longest and extends back to his CFL debut in the 2018 season opener where he missed a 48-yard FG attempt.

Golden Knights rally for 5-3 playoff win over Stars
Aug 3, 2020 10:27 PM
Comments
We welcome your feedback and encourage you to share your thoughts. We ask that you be respectful of others and their points of view, refrain from personal attacks and stay on topic. To learn about our commenting policies and how we moderate, please read our Community Guidelines.