Dwight Powell's contributions to the Dallas Mavericks' NBA-leading offence might not be as apparent to the casual observer as those of his flashier teammates.
0
Jan 21, 2020 1:16 PM By: Canadian Press 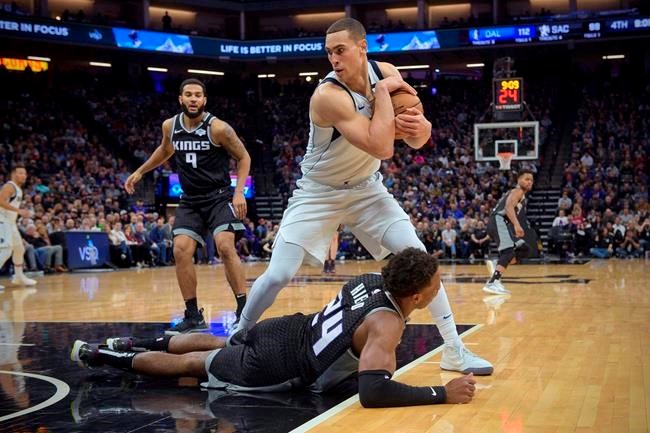 Dwight Powell's contributions to the Dallas Mavericks' NBA-leading offence might not be as apparent to the casual observer as those of his flashier teammates.

Twenty-year-old Luka Doncic is averaging nearly a triple-double a game en route to becoming a leading MVP candidate. Kristaps Porzingis, when healthy, uses his seven-foot-three frame to punish opponents at both ends of the court. Tim Hardaway, Maxi Kleber and Seth Curry can all do damage from the three-point line.

Powell, meanwhile, is averaging a workmanlike 9.6 points and 5.7 rebounds a game as the Mavericks' starting centre — solid numbers that don't exactly jump off the stats page. What the box score doesn't show, however, is how his efficiency around the rim and ability to work the pick-and-roll with Doncic helps fuel the Mavericks' offensive machine.

Powell's play has earned him a prominent fan in Mavericks owner Mark Cuban, who gushed about the Toronto native in a recent article in the Dallas Morning News.

"Unless it's a top five player in the league, Dwight's untradeable — although I just jinxed him," Cuban said before the Mavericks faced the Golden State Warriors a week ago in San Francisco.

"People don't realize, Dwight Powell is the ultimate, consummate team player," he continued. "No ifs, ands or buts. Dwight Powell you could say is the heart and soul of this team. He does everything it takes to win and nothing for his personal stats. Nothing."

Powell's reliable scoring at the basket can give Doncic a tantalizing target for a pass inside after a pick-and-roll or an alley-oop dunk. He can draw enough attention under the basket to spread the floor and open up another big or an outside shooter.

While Powell is willing to be an essential but quiet piece of the Mavericks offence, which had a league-best rating of 116.1 heading into a game Tuesday night against the Los Angeles Clippers, he is also been able to put up big numbers himself when the opportunity arises.

Instead of being "jinxed" by Cuban's praise, Powell instead had one of his best offensive games of the season against the Warriors in a 124-97 Mavericks victory. With Porzingis sidelined by an injured right knee, Powell stepped up and scored 21 points while shooting 9-for-9 from the floor for the second time this campaign.

"His rolls and attacks and offensive-rebound crashes are among the most efficient in the game," Mavericks coach Rick Carlisle said of Powell after the win over the Warriors. "He's playing at a high level."

Powell, who signed a three-year, US$33.3-million contract extension last summer that kicks in next season, has been shooting 69.5 per cent and averaging 13 points over the last 10 games since Porzingis has been out. Carlisle has credited Powell as "one of the most opportunistic guys that we've had at this franchise."

WIGGINS NETS TRIPLE-DOUBLE — Minnesota forward Andrew Wiggins of Vaughan, Ont., became the second Canadian in a week to record a triple-double with 18 points, 11 assists and 10 rebounds in the Timberwolves' 122-112 loss to visiting Toronto on Saturday. Hamilton's Shai Gilgeous-Alexander had 20 points, 20 rebounds and 10 assists in the Oklahoma City's Thunder's 117-104 win over Minnesota on Monday. The only other Canadian to get a triple double is Hall of Famer Steve Nash, who did it three times in his career.

HAPPY NEW YEAR — Memphis forward Dillon Brooks of Mississauga, Ont., is averaging 21.6 points and shooting 45.3 per cent from the three-point line over nine games so far in 2020. He put up 31 points — tying a season high — and added nine rebounds, four assists and two steals in the Grizzlies' 126-116 loss to New Orleans on Monday.

T'D UP TRISTAN — Cleveland centre Tristan Thompson was ejected in the third quarter of the Cavaliers' 113-109 loss at Memphis on Friday when he tried to pat Grizzlies forward Jae Crowder on the backside and received his second technical foul of the game. "A lot of barking and no bite, we will leave it at that," Crowder said after the game. Thompson's ejection came during a frustrating stretch that saw him score three points on 1-for-10 shooting over two games. He has since bounced back, including a 13-point, 22-rebound performance in a 106-86 loss to New York.

CHECKING IN — Montreal's Luguentz Dort made his first career start on Monday, putting up eight points, two assists and two rebounds over 32 minutes to help the Thunder to a 112-107 road win over Houston. ... Miami centre Kelly Olynyk of Kamloops, B.C., has had a tough start to the new year, averaging 3.7 points and shooting an uncharacteristically low 18.2 per cent from three so far in January. ... Sacramento guard Cory Joseph of Pickering, Ont., has been shooting 45 per cent from three this month.

CanaDunks is a weekly notebook on Canadians in the NBA.