Dallas Stars fans expected to see plenty of goals this season from Joe Pavelski, signed as a free agent after a 38-goal season for San Jose. On Monday night, they saw his first in his new home rink.
0
Oct 22, 2019 1:03 AM By: Canadian Press 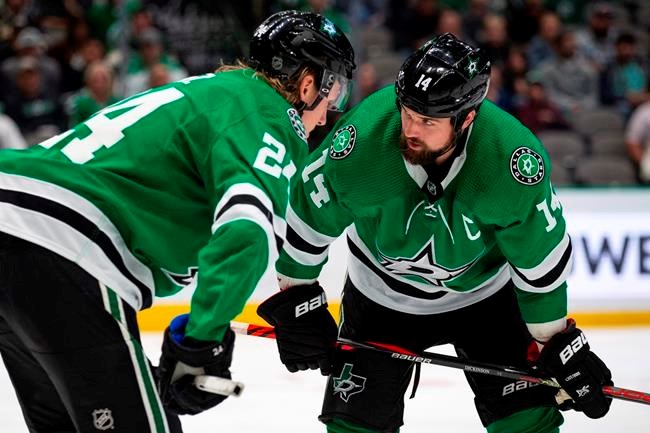 Dallas Stars fans expected to see plenty of goals this season from Joe Pavelski, signed as a free agent after a 38-goal season for San Jose.

On Monday night, they saw his first in his new home rink.

Pavelski scored a power-play goal midway through the second period, and the Stars beat the Ottawa Senators 2-1 for their second straight win.

"There's been a few that have been close, and to see that one squeak in there was nice," Pavelski said.

Radek Faksa also scored for Dallas, and Anton Khudobin made 19 saves for his first win in four games this season. The Stars won for the first time in four home games.

Dallas coach Jim Montgomery was cautiously optimistic after his team's third win in 11 games (3-7-1) this season.

"I think we're rounding into form," he said. "But it's still only two games where we've played the right way. We have to continue to build on it."

Vladislav Namestnikov scored his team-high fourth of the season with 1:12 left to spoil Khudobin's bid for his ninth career shutout.

"I didn't have a lot of work, to be honest," Khudobin said. "The guys played really well. But it's a tough game to play just because you don't see a lot of work."

Anders Nilsson saw plenty of work, stopping 41 shots for the Senators, who have lost four straight (0-3-1).

"(Nilsson)'s been outstanding," Ottawa coach D.J. Smith said. "He was our best player tonight. I thought we wasted his effort here tonight. It's a real bright spot for us that he's playing the way he is."

Faksa scored in a first period in which Dallas outshot Ottawa 17-9.

The Stars had an excellent chance during the first minute when Miro Heiskanen picked up a rebound in the slot, but he shot wide right. They didn't score until 1:02 left in the first when Faksa redirected Taylor Fedun's shot from the right point past Nilsson.

Dallas made it 2-0 lead with 9:16 left in the middle period, 1 second after Ottawa had killed the first penalty of a 5-on-3 power play. With Stars surrounding the net, the puck went off Nilsson to Jamie Benn in front of the net and to Pavelski, who knocked it in from the left of the net. It was only the third for Dallas in 32 power plays, including one in each of the last two games. Entering the game, the Stars' power play ranked 28th in the league.

The Stars had a third power play in the period, highlighted by another good chance for Heiskanen. His drive from high in the slot went over Nilsson and squarely off the crossbar.

NOTES: The Senators own the NHL's worst success rates on the power play (4 ) after failing to score on their two chances. ... Khudobin was scheduled to start even before No. 1 goalie Ben Bishop had to deal with his home damaged by a tornado Sunday overnight. Bishop was in uniform next to the Stars' bench for the game. The tornado blew the roof off a house owned, but up for sale, by Dallas C Tyler Seguin where he no longer lives. ... Nilsson's highest saves total this season was 52 in a 3-2 shootout loss at Vegas on Thursday.

Flames: Return home to begin a three-game homestand on Wednesday against Detroit.

Stars: Play the second in a four-game homestand vs. Anaheim on Thursday.