WINNIPEG — After Winnipeg Jets defenceman Nathan Beaulieu scored his first goal of the season Sunday, he made the gesture of throwing a monkey off his back.
0
Feb 17, 2020 12:45 AM By: Canadian Press 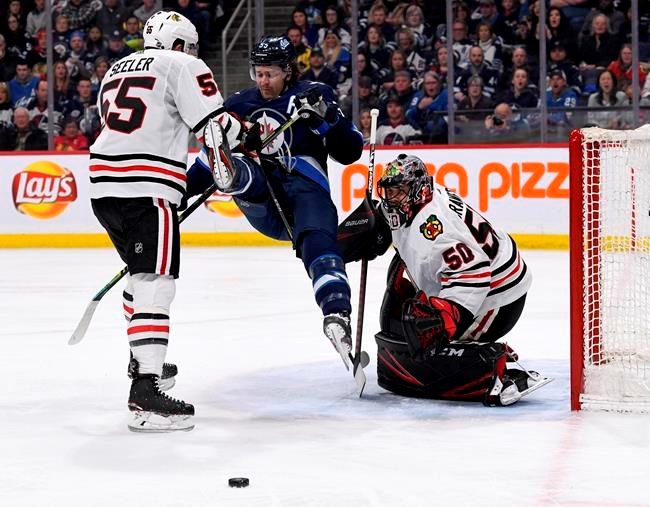 WINNIPEG — After Winnipeg Jets defenceman Nathan Beaulieu scored his first goal of the season Sunday, he made the gesture of throwing a monkey off his back.

It wasn't surprising, considering he was only playing in his 27th game of an injury-riddled season when his goal at 1:36 of the third period held up as the game winner in the Jets' 3-2 victory over the Chicago Blackhawks.

“Obviously it wasn’t the prettiest goal I’ve ever scored, but it was a big one,” said Beaulieu, who missed time for three separate injuries, including broken bones in his hand and foot.

It was also his first goal since Winnipeg acquired him from Buffalo at last year's trade deadline. His previous goal was with the Sabres on Nov. 27, 2018. He's scored 12 career goals in 359 games.

Beaulieu's one-timer from the point hit Chicago forward Alex DeBrincat in the high slot and went past Blackhawks goalie Corey Crawford, who had a teammate and a Winnipeg player in front of his crease.

Chicago forward Patrick Kane, who had a goal and assist, called Beaulieu's winner an “unfortunate goal.”

“I don't know how the guy got in the crease, but it looked like (Crawford) was a little bit tangled up and it kind of deflected off one of our guys and went in, so tough break,” Kane said.

Players were unsure if the goal was going to be challenged.

“We didn't really know on the bench,” Kane said. “We were kind of waiting to hear what the call was so I guess they deemed it wasn't a good challenge.”

"Yeah, of course (we considered it),” Colliton said. “We see there's contact but, you know, they've shown they're not going to overturn it unless it's pretty clear so that's why we didn't."

Mason Appleton had a goal and assist and Jack Roslovic also scored for Winnipeg, which was coming off two straight losses. Dmitry Kulikov picked up a pair of assists.

Jets coach Paul Maurice was happy for Beaulieu and the third-line's output.

“They play hard minutes, normally a lot of penalty-kill time and get some people to the net, but good for him, he’s earned it,” Maurice said.

Ryan Carpenter also scored for Chicago, which was coming off an 8-4 win in Calgary on Saturday.

“No question disappointing not to have more points on the trip,” Colliton said. “Ultimately, we had three games that were acceptable and two that weren't good enough. We need more than that to get the points we need."

The Blackhawks led 1-0 after the first period.

Carpenter scored his third goal of the season after Kane sent a sharp-angled backhand pass to the front of the net and Carpenter redirected the puck past Hellebuyck at 15:44.

Appleton tied it up when he tipped in Beaulieu's point shot at 6:38 of the second.

Winnipeg appeared to go ahead at 9:05 on a goal by Kyle Connor, but it was reviewed and waved off because the puck went in off his arm.

Roslovic gave the Jets the 2-1 lead at 15:37 when he tipped a Kulikov point shot, but Chicago tied it up after Kane scored his 27th goal of the season with 53 seconds left in the middle period.

“It’s just a matter of getting pucks to the point and then getting bodies to the net and around the net,” Appleton said. “Our first two goals were virtually the same exact picture. Third goal was another point shot."

The Blackhawks tried to beat Hellebuyck in the final minutes with the extra man, but the Jets blocked shots and got their sticks on pucks to stymie their efforts.

Not one penalty was called in the game – a first in the NHL this season.

Winnipeg hosts Los Angeles on Tuesday. Chicago is home to the New York Rangers on Wednesday.

This report by The Canadian Press was first published Feb. 16, 2020.

Dana White says UFC 249 is on with Justin Gaethje taking on Tony Ferguson
Apr 6, 2020 4:12 PM
Comments
We welcome your feedback and encourage you to share your thoughts on this story. We ask that you be respectful of others and their points of view, refrain from personal attacks and stay on topic. To learn about our commenting policies and how we moderate, please read our Community Guidelines.