MONTREAL — Impact defender Rudy Camacho says he and his teammates are "disgusted" by their end-of-game collapse — the worst in franchise history.
0
Aug 17, 2019 11:31 PM By: Canadian Press 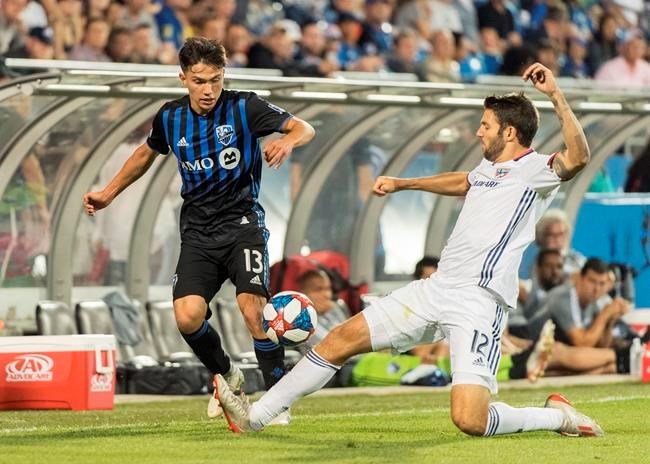 MONTREAL — Impact defender Rudy Camacho says he and his teammates are "disgusted" by their end-of-game collapse — the worst in franchise history.

Two goals in the final five minutes of play, including a header in stoppage time, completed the comeback for the visitors.

"I can't explain what's happening," said Camacho. "We're conceding two goals per game on dead ball situations. Today it was a penalty kick and yet another corner kick. It's maddening because we played well until the 60th minute.

"All I can say right now is that everyone is disgusted. We need to stop this because it's getting ridiculous."

Montreal is winless in three straight and 1-6-1 in its last eight league games.

The Impact were leading 3-0 with 30 minutes to play through Lassi Lappalainen's first-half brace and a third from Orji Okwonkwo.

Dallas cut the deficit in the 59th minute when substitute Zdenek Ondrasek jumped on a rebound from a Michael Barrios shot and beat goalkeeper Evan Bush in close. Bush got a hand on it but couldn't keep it out.

"At 3-0, it's a tough moment," said FC Dallas coach Luchi Gonzalez. "Especially when I thought we actually had some good flashes before they scored the third. We didn't give up. An individual like Cobra (Ondrasek) to come in at halftime and show energy, that shows a lot about him."

With it 3-1 in the 85th minute, Dallas was awarded a penalty when Ken Krolicki handled the ball in the box. Captain Reto Ziegler converted from the spot as Bush dove the wrong way.

The visitors found their equalizer in stoppage time when Ryan Hollingshead got his head on a corner kick — another set-piece goal against the Impact.

There were loud boos at the final whistle from some of the 17,509 in attendance at Saputo Stadium.

The Impact started the encounter well and didn't look like a team caught in a season-worst slump.

Remi Garde's men were on the front foot from the opening whistle even without two of their best players. Midfielders Ignacio Piatti and Samuel Piette were both absent after sustaining adductor injuries versus the Chicago Fire last weekend.

Bojan started the match and homegrown player Ballou Tabla made an appearance off the bench but Finnish winger Lappalainen is the one who stole the show in the first half.

Both of Lappalainen's goals came off horrendous mistakes from FC Dallas players.

In the eighth minute, Dallas defender Matt Hedges intercepted Daniel Lovitz's pass into the box but he completely whiffed on the ball. Lappalainen was there to claim the spoils — an easy goal from 12 yards out to the right of goalkeeper Jesse Gonzalez.

In first-half stoppage time, Lappalainen was gifted another goal, his fourth since joining Montreal three weeks ago. Jesus Ferreira made an ill-advised pass to a teammate and Lappalainen easily got in the way. The 20-year-old on loan from Bologna moved in all alone on Gonzalez and made no mistake for his second of the match.

Okwonkwo made it 3-0 for the home side in the 56th minute when he got on the end of Saphir Taider's cross in the box. That was three minutes before Dallas scored their first.

"I'd rather not score and win, of course," said Lappalainen. "We have to be more consistent. With 30 minutes left, we lead 3-0, it can't happen that we concede three goals. I don't know about the other guys. My legs were a bit tired. We couldn't press anymore that much. We gave the control to them."

Notes: The Impact are winless in their last four games against Dallas (0-3-1) since May 2015. … It was the first time Maximiliano Urruti faced his former club.