Mike Babcock is aware his seat will be a little warmer than usual this season. And if things don't go according to plan for the head coach of the Toronto Maple Leafs, it could get positively scalding.
0
Sep 13, 2019 3:18 PM By: Canadian Press 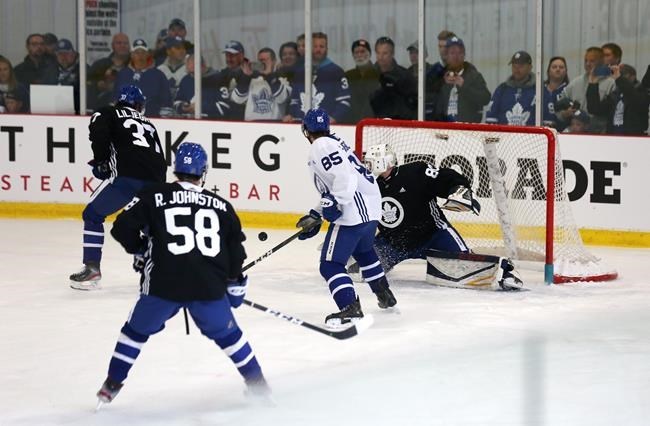 Mike Babcock is aware his seat will be a little warmer than usual this season.

And if things don't go according to plan for the head coach of the Toronto Maple Leafs, it could get positively scalding.

That's life behind the bench of a team with Stanley Cup aspirations, a talent-loaded roster and three straight first-round playoff exits.

"I do, for sure," Babcock said when asked if he feels the screws tightening as training camp opened this week. "The expectation each and every year should be greater than the previous year if you're going in the right direction."

Babcock enjoyed a honeymoon period early in his tenure — he rightly warned "there's pain coming" at his introductory press conference in May 2015 — as Toronto pivoted to a full rebuild that saw the existing, underperforming roster shred to pieces.

The Leafs bottomed out in the standings and drafted star centre Auston Matthews, surprising even themselves by making the playoffs the following spring for just the second time in 12 years.

Buoyed by that leap forward, the Leafs registered a franchise-record 105 points in 2017-18 only to be outmatched by the Boston Bruins in a seven-game defeat.

Toronto put up another 100-point campaign under Babcock last season, but again fell to their Atlantic Division rivals in the opening round.

That loss, however, resonated differently.

Unlike the previous year, the Leafs matched the Bruins punch for punch. They led the series 1-0, 2-1 and 3-2, but couldn't get the job done on home ice in Game 6 or on the road in Game 7.

Toronto has come a long way — just not far enough for a team hungry to end a 52-year title drought.

"We were in last place (in 2014-15)," said Babcock, who became the highest-paid coach in NHL history when he signed an eight-year, US$50-million contract with the Leafs. "This team was no good. That's not the case now. We've got something to be proud of and our fans are proud of it.

"We want more, and I think that's the way life should be."

While the division that includes Boston and the Tampa Bay Lightning got tougher this off-season, the 56-year-old said there's a belief internally a number of Leafs are ready to take a big step forward.

One of those players is Matthews, who's entering his fourth professional season with a hefty contract extension in his back pocket.

Babcock was heavily criticized for his player deployment — including Matthews seeing just under 19 minutes of ice time — in Toronto's most recent Game 7 loss.

The coach pointed to shift length as one of the reasons, but the two spoke this off-season and appear to be on the same page.

"He wants to be a driving force," Babcock said of Matthews. "No different than (Leafs centre) John Tavares. They want to be difference-makers. They want to be the guys that put their name on the Cup, that have led their team.

"That's what you aspire to as a player, and I think that's your job as a coach ... to help them."

Matthews, who has put up 71 goals and 136 points over the last two seasons despite missing 34 games through injury, said the pair made "positive progress" this summer.

"You're never going to agree with everything," he said. "I made it clear what I want to see out of him, and what he wants to see out of me."

Dubas traded or cut loose a number of Babcock's favourite veterans — including winger Patrick Marleau and defenceman Ron Hainsey — in an off-season of change precipitated by a salary cap crunch and a desire to dress a lineup that more reflects the way he wants the game played.

And with star winger Mitch Marner absent as negotiations on a new contract continue, Babcock has a lot on his plate as he looks to mesh a roster that could have as many as 10 new faces on opening night.

Dubas said one of the areas where he wants improvement is how the Leafs deal with adversity. The second-year GM pointed to the Bruins, who lost Zdeno Chara, Patrice Bergeron, Charlie McAvoy and David Pastrnak for extended periods last season, and kept chugging along.

"Things are going to happen that we didn't expect," Dubas said. "If we want to continue to take the right steps, we have to weather those and keep the train rolling on the tracks because the rest of the league doesn't stop."

That task will largely fall to Babcock.

"It's taken us some time to get here," he said. "Now we're a team that we feel like has an opportunity each year.

"You get slapped around a little bit. All those little slappings help you grow. All you've got to do is look at the teams that win. They've been slapped previously."

One more slap and Babcock could be looking for work.

Grey Cup-champion Winnipeg Blue Bombers shuffle their coaching staff
Jan 21, 2020 3:34 PM
Canadian skier Andrew Longino wins gold in men's halfpipe at Youth Olympics
Jan 21, 2020 3:27 PM
Former NHL forward Akim Aliu signs with Czech Extraliga team Litvinov
Jan 21, 2020 3:03 PM
Comments
We welcome your feedback and encourage you to share your thoughts on this story. We ask that you be respectful of others and their points of view, refrain from personal attacks and stay on topic. To learn about our commenting policies and how we moderate, please read our Community Guidelines.