ROME — Nick Kyrgios walked off the court in a fit of rage after throwing a chair onto the red clay at the Italian Open and was defaulted Thursday from his second-round match.
May 16, 2019 1:38 PM By: Canadian Press 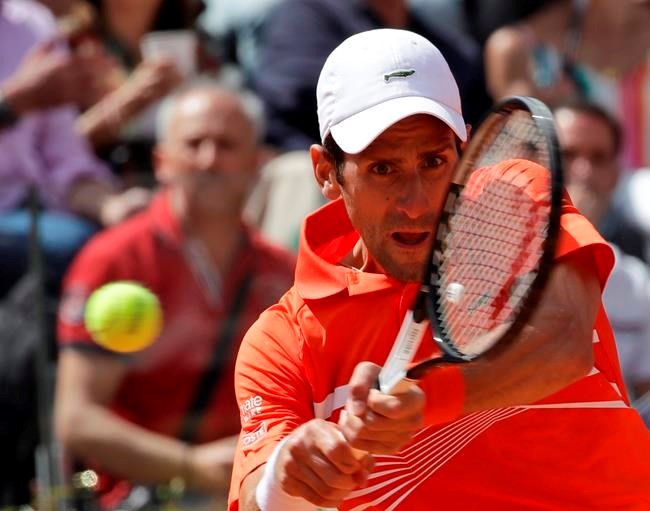 ROME — Nick Kyrgios walked off the court in a fit of rage after throwing a chair onto the red clay at the Italian Open and was defaulted Thursday from his second-round match.

First, Kyrgios kicked a water bottle in his match against Norwegian qualifier Casper Ruud. Then he picked up a white chair and flung it onto the court with his right hand.

Kyrgios, who has a history of bad , was suspended by the ATP Tour in 2016 for "tanking" a match and insulting fans during a loss at the Shanghai Masters.

The men's tour said Kyrgios will lose his $33,635 in prize money from the tournament and 45 ATP points, adding there will likely be further punishment pending an investigation.

In 2015, Kyrgios insulted Stan Wawrinka with crude remarks during a match in Montreal. He was fined $12,500 and given a suspended 28-day ban. He also attracted criticism for deciding not to play at the Olympics because of a spat with an Australian team official, and for firing back at retired players who have offered advice.

Earlier, Roger Federer, Rafael Nadal, Novak Djokovic and Naomi Osaka all advanced in the first of their two matches Thursday.

A rainout on Wednesday backed up play, causing the title contenders to try to win their double-headers as efficiently as possible to save energy.

The 20-year-old Shapovalov, of Richmond Hill, Ont., snapped a four-match losing streak with a win over Pablo Carreno Busta of Spain in the opening round, but Djokovic presented a much stiffer test.

Shapovalov, ranked 22nd in the world, did not have one break-point opportunity against Djokovic at the ATP Tour Masters 1000 clay-court event.

The top seed won 88 per cent of his points on first serve, well above Shapovalov's 56 per-cent rate.

Shapovalov appeared distracted by a flyover from fighter jets performing an air show and double-faulted to hand Djokovic a 3-1 lead in the first, prompting him to have a word with the chair umpire.

Djokovic will face either Philipp Kohlschreiber or Marco Ceccinato.

Federer saved all seven break points he faced to beat Joao Sousa 6-4, 6-3, then was to play Borna Coric for a spot in the quarterfinals.

"Good thing was this one was not that physical," Federer said. "Borna is tough. I lost to him a couple of times last year."

En route to breaking Sousa midway through the first set, Federer ran down a drop shot with a perfectly timed slide and replied with a delicate, angled put away.

Federer fell behind 40-0 in the next game but then won five straight points to secure a 5-3 lead, closing out the service game with a forehand cross-court passing shot on the run from the corner — drawing a loud roar from the Foro Italico crowd.

"I came out of the blocks well," Federer said. "I had a good feeling. Didn't get broken. That, on clay in a first round, is always a good sign."

The top-ranked Osaka comfortably beat Dominika Cibulkova 6-3, 6-3 and will next face Mihaela Buzarnescu.

Osaka, who can hold onto the No. 1 ranking by reaching the quarterfinals, hit 44 winners and 12 aces.

"My serve was really good," Osaka said. "I just tried to be really calm."

Czech teenager Marketa Vondrousova rallied past Simona Halep 2-6, 7-5, 6-3 for her second win over the Romanian this year.

Halep, who was a finalist in Rome the last two years and is preparing to defend her French Open title, took a medical timeout early in the third set and received treatment on her left leg.

TFC, D.C. United game rescheduled to Monday morning after COVID-19 test concerns
Jul 12, 2020 9:44 PM
Comments
We welcome your feedback and encourage you to share your thoughts. We ask that you be respectful of others and their points of view, refrain from personal attacks and stay on topic. To learn about our commenting policies and how we moderate, please read our Community Guidelines.