TORONTO — The Blue Jays will administer caution with a left knee tweak Vladimir Guerrero Jr. suffered in the second inning of his team's 4-3 loss to the Seattle Mariners on Saturday.
0
Aug 17, 2019 7:35 PM By: Canadian Press 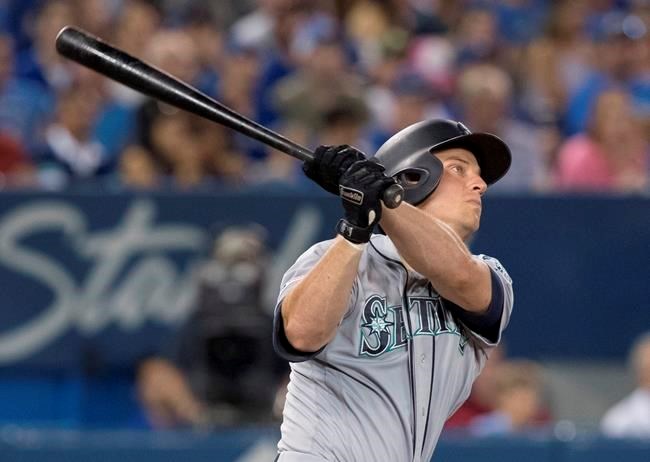 TORONTO — The Blue Jays will administer caution with a left knee tweak Vladimir Guerrero Jr. suffered in the second inning of his team's 4-3 loss to the Seattle Mariners on Saturday.

The 20-year-old Guerrero was scheduled to undergo an MRI before the Blue Jays complete their three-game set against the Mariners on Sunday to determine the seriousness of this setback.

The rookie third baseman injured the same knee on June 6, 2018, while with the double-A New Hampshire Fisher Cats. The left knee strain kept him out of action for four weeks.

He tweaked his knee on Saturday when he cut off a ground ball in front of shortstop Bo Bichette, but Guerrero failed to throw out Seattle infielder Austin Nola. The play was ruled an infield hit, and he later scored the game's opening run on Keon Broxton's sacrifice fly.

"On the play when he went in front of Bo, (Guerrero) felt a little tweak in his knee, so we took him out just in case," Toronto manager Charlie Montoyo said. "He's going to get an MRI to make sure he's fine. So I'll know a little bit more about it tomorrow."

Did Guerrero's history with knee problems make the decision easier to pull him from the game?

"For anybody who complains about something or feels something we're going to take him out of the game, even more so this late in the season," Montoyo remarked. "That goes for anybody. He complained, so we took him out."

Even though Bichette was in position to make the play, both Montoyo and Bichette felt Guerrero made the right play.

"That's a tough play for the shortstop," Montoyo said. "Any time the third baseman can get in front of him... it's better."

Bichette added: "Every time a third baseman can get to it, they need to go get to it because I'm running away from first base and he's running to it. So when he called me off, it's his play.

Bichette, who hit a two-out solo home run in the fifth inning for his fifth since being promoted to the Blue Jays 19 games ago, did not get a chance to talk to his injured teammate after the game.

"Hopefully, it's not too bad," Bichette said. "But I know he dealt with something similar and it took a while."

Seattle's Kyle Seager smacked the deciding home run off of the right foul pole in the eighth inning. He has hit safely in 21 of his last 22 games, dating back to July 22, going 29 for 80 (.363) with nine homers and 20 RBI during this impactful stretch.

The Mariners (51-73) went ahead 3-1 in the fourth inning with a Nola homer and another sacrifice fly from Broxton. But the Blue Jays (52-74) battled back to tie the game after the Bichette homer and catcher Reese McGuire's solo shot to lead off the seventh inning.