MONTREAL — A whirlwind of sudden changes and instability could derail the Montreal Impact's playoff hopes down the stretch.
Aug 16, 2019 6:44 PM By: Canadian Press 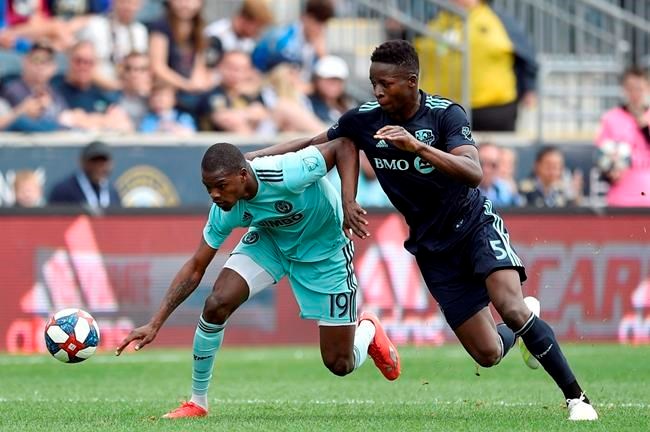 MONTREAL — A whirlwind of sudden changes and instability could derail the Montreal Impact's playoff hopes down the stretch.

A week of rotten luck – including new injuries to Ignacio Piatti and Samuel Piette and the unexpected departure of Zakaria Diallo — has befallen the Impact (10-13-3) ahead of Saturday's clash with FC Dallas (10-10-6).

This comes one week after Montreal added three new players to its roster at the very end of the transfer window. All in all, the Impact look very different than they did just two weeks ago, at a time in the season when consistency is crucial.

"There is stuff you can control. The things that you cannot control, like the Diallo stuff, we have to go on another page now," said Impact coach Remi Garde before training on Friday. "On the other hand, the group needed some refreshment.

"I feel the group is, maybe not new, but refreshed. Hopefully we will be able to take advantage of that."

Midfielders Piette and Piatti sustained adductor injuries in Montreal's 3-2 loss to the Chicago Fire last Saturday. Both had recently recovered from other injuries and were making their return to MLS play.

Piatti has already missed 18 games this season with two separate knee injuries. His third knock of the year is worse than previously expected and will keep him out of the lineup for at least three more weeks. Garde hopes the 34-year-old will return in time for the first leg of the Canadian Championship final against Toronto FC on Sept. 18.

Piette will miss a minimum of three games. Prior to the defeat in Chicago, Piette had already missed the previous three matches with an intercostal injury.

Meanwhile, centre back Diallo requested a transfer from the Impact and was sent to French Ligue 2 side RC Lens this week. Diallo was Montreal's most consistent defender this season.

"We miss him already. That's the business," said midfielder Saphir Taider, who leads Montreal with nine goals. "We're disappointed but happy for him. We were surprised to see him go. I know how quickly these things happen sometimes. He didn't even have a chance to say goodbye. He sent us all a message afterwards to say why he left."

All this at a time when the slumping Impact are vying for a playoff spot in the Eastern Conference. With eight games left this season, the seventh-place Impact are tied on points (33) with eight-place Orlando City and Toronto FC in ninth.

The top seven teams in each conference make the playoffs.

Montreal's recent form is cause for concern though. The Impact have dropped six of their last seven league games as they cling to that final post-season position. A loss against Dallas will likely drop the Impact below the red line for the first time since April.

The team is hoping recent positive results in the Canadian Championship can help revive its playoff aspirations in MLS. Montreal has won three straight games in the domestic tournament – including 1-0 on Wednesday night against Calgary's Cavalry FC in the second leg of the semi-final.

"Going to the cup final for sure gives us a great boost for the upcoming games this month," said Raitala. "We're very happy with the clean sheet. Defensively we worked very hard. It's very important that we have each other's backs every day.

"Every game in MLS is a final for us, starting tomorrow (Saturday). It's a big game."

FC Dallas is in a similar boat as Montreal in the Western Conference. Dallas is eighth in the West, one point behind the Portland Timbers.

The Texan team's road form has been lacking all season. Dallas is 3-9-1 away from Toyota Stadium this year, including 1-7-1 in their last nine. Coach Luchi Gonzalez's men have been shut out in four of their last five road matches, including 2-0 versus the Los Angeles Galaxy on Wednesday.

"It's a must-win," Gonzalez told the team's website. "We're in a position mathematically that we have to climb and we don't have a choice. That means we have to respond. But I'm lucky we have a group of players that respond. That's the next step."

TROUBLES ON THE ROAD: FC Dallas have failed to keep a clean sheet in all but one away match this season.

FIRST START?: New signing Bojan Krkic is expected to make his first MLS start against Dallas. Bojan made an appearance off the bench against the Chicago Fire last week, coming into the game in the 63rd minute.

DALLAS DOMINANCE: The Texans have the historical advantage against Montreal, boasting a 5-1-1 record.

Petry gets tiebreaking goal in 3rd, Canadiens beat Penguins
Aug 6, 2020 2:07 AM
Wednesday's Games
Aug 6, 2020 1:29 AM
Comments
We welcome your feedback and encourage you to share your thoughts. We ask that you be respectful of others and their points of view, refrain from personal attacks and stay on topic. To learn about our commenting policies and how we moderate, please read our Community Guidelines.