Inspired by the sweet science, B.C. Lions down Calgary Stampeders 26-21 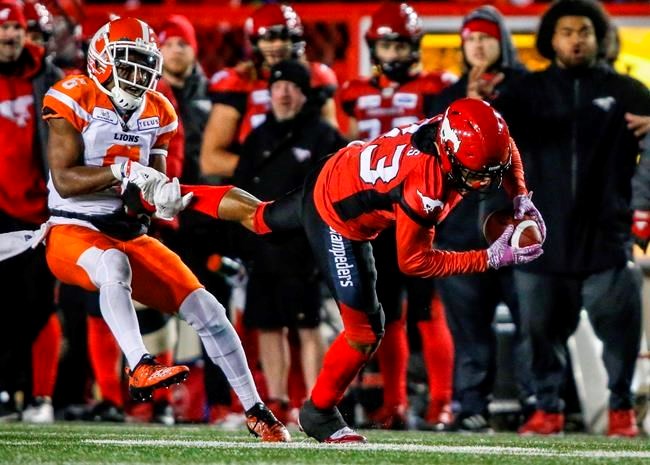 The Lions watched "Marvelous" Marvin Hagler beat Thomas "The Hitman" Hearns in a middleweight title fight from April 15, 1985, prior to outlasting the host Calgary Stampeders 26-21 on Saturday at McMahon Stadium.

"Part of that was to show the players how two great champions come together and how they have to be able to deal with the good and the bad," Buono explained.

"Exactly as the fight was, the game was. The players can understand how brutal sports is, but you've got to be willing to take the hit."

Calgary lost at home for the first time this season, but still tops the CFL's West Division at 12-3 and has secured a playoff game at McMahon.

A Saskatchewan Roughriders loss to the Winnipeg Blue Bombers earlier Saturday had opened the door for the Stampeders to lock down first in the division with a win or a tie versus the Lions.

But the three playoff spots in the West and the cross-over berth in the East Division are still in play heading into Week 19.

Saturday's game was the final regular-season appearance at McMahon for Buono, who has declared his 25th season as a CFL head coach will be his last.

The 68-year-old won three Grey Cups with the Stampeders when he was their head coach from 1990 to 2002. A video tribute to the winningest coach in CFL history preceded Saturday's game.

"I thought that was very touching," Buono said. "We're the enemy, I know that, but it was nice to be acknowledged and appreciated.

"I have a lot of fond memories here as a coach. As a visitor not too often."

Tyrell Sutton scored a pair of rushing touchdowns and compiled 106 yards on 22 carries in his Lions debut. B.C. acquired the running back in a Sept. 25 trade with the Montreal Alouettes.

Calgary kicker Rene Paredes was good from 38 and 35 yards in front of announced 23,563 at McMahon Stadium.

The Stampeders briefly led 21-20 in the third quarter before B.C. pulled ahead again on a pair of Long field goals.

Calgary's drive late in the fourth quarter stalled on B.C.'s 27-yard line, where the Stampeders turned the ball over on downs.

"We're not clicking on many cylinders at all right now," Calgary head coach Dave Dickenson. "We've got a lot of improving that needs to be done.

"We've got a good record, but other than that, we've got to be a lot better than that. A lot of people taking selfish penalties and way too many penalties as a whole.

"A lot of it falls on the offence and I'm responsible for that, so I've got to make sure to do a better job."

Lions quarterback Travis Lulay, making his first start since Sept. 14 because of a shoulder injury, completed 14 of 26 passes for 193 yards. He was intercepted once.

Calgary's Bo Levi Mitchell completed 17 of 38 passes for 215 yards and was picked off once.

Lulay hadn't reached his second birthday when Hagler and Hearns fought at Caesar's Palace in Las Vegas. He understood why Buono wanted the Lions to watch it though.

"Both guys are fighting like crazy. One guy ultimately ends up winning. Let's choose to be that guy. The guy that's most resilient," Lulay said

"Shoot, I'll watch it every week if it means winning, right?"

Als head coach Jones says he received death threats as CFL player in Winnipeg
Jun 2, 2020 6:26 PM
Former Canadian university defenceman Kodie Curran signs with Anaheim Ducks
Jun 2, 2020 6:18 PM
Comments
We welcome your feedback and encourage you to share your thoughts. We ask that you be respectful of others and their points of view, refrain from personal attacks and stay on topic. To learn about our commenting policies and how we moderate, please read our Community Guidelines.