Harris throws three TD passes, runs for two others as Eskimos down Argos

TORONTO — Trevor Harris was a one-man show Friday night. Harris threw three TD passes and ran for two others to earn the Edmonton Eskimos a 41-26 win over the Toronto Argonauts.
0
Aug 17, 2019 12:07 AM By: Canadian Press 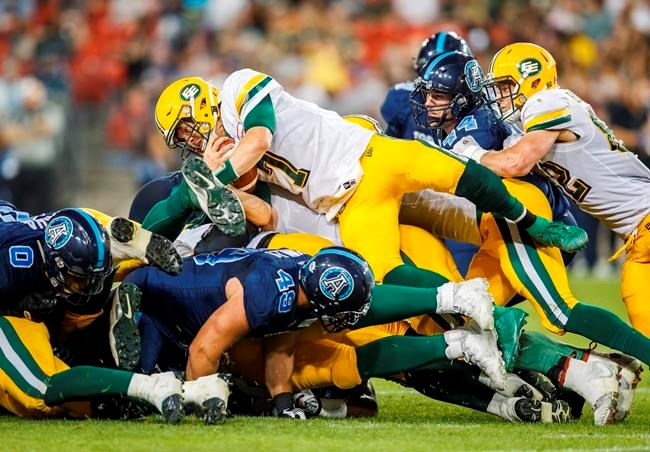 Harris threw three TD passes and ran for two others to earn the Edmonton Eskimos a 41-26 win over the Toronto Argonauts. He finished 28-of-41 passing for 420 yards, his 22nd straight game with 20 or more completions to stand two short of the CFL record held by former Eskimo-Argo Ricky Ray.

"There's not much to say about Trev," said Eskimos receiver DaVaris Daniels, who had five catches for 155 yards. "I think he should be in the conversation for MOP right now.

"He's elite, man, he's the leader of our team. He's a man on a mission and I think everyone is seeing it right now."

Harris wasn't immediately available for comment as he was selected to undergo a post-game drug test. But Eskimos head coach Jason Maas gushed about his quarterback.

"He did a great job," Maas said. "He was commanding the offence the way it needs to be commanded.

"There'll always be stuff to improve upon but when he's directing our offence the way he was tonight, it's going to be hard to stop."

Toronto pulled to within 34-26 on McLeod Bethel-Thompson's 28-yard TD pass to Brandon Burks at 5:24 of the fourth. But Harris cemented the victory with a one-yard TD run at 11:44 that gave Edmonton (6-3) it's winning margin as the offence accumulated 509 total yards.

Both teams started strong, each scoring points on their first three offensive possessions. But Edmonton recorded TDs while Toronto settled for three field goals in falling behind 21-9.

"We started off fast offensively and scored touchdowns," said Maas. "That first half, they (Argos) played very well offensively and our defence did a very good job in the redzone of shutting them down and holding them to field goals.

"We finally offensively played up to our capabilities for most of the game."

Edmonton earned a second straight win overall and third consecutive over the Argos. But it was the club's first in Toronto since 2016 heading into a big contest next week against the West Division-leading Winnipeg Blue Bombers (7-2), then the annual home-and-home Labour Day series with the arch-rival Calgary Stampeders (5-3).

"We don't care about the next three weeks, it's all about next week," Maas said. "We play at home against Winnipeg and that's all our focus is on.

Edmonton dropped a 28-21 decision to the Bombers in Winnipeg on June 27 but is 4-0 at Commonwealth Stadium this year.

Greg Ellingson was Harris's favourite target with 10 catches for 170 yards and two TDs.

Toronto got its  first TD of the game on Bethel-Thompson's one-yard scoring strike to S.J. Green at 6:13 of the third. The 83-yard, nine-play drive cut Edmonton's lead to 24-19.

"The name of the game is scoring touchdowns and we got too many field goals," said Bethel-Thompson. "We started quick, the whole first quarter they couldn't stop us.

"Just scoring field goals is not the same momentum. We have to put up points early with touchdowns."

Bethel-Thompson was 19-of-26 passing for 200 yards and two TDs before a BMO Field gathering of 16,490 on the opening day of the CNE. It marked the first time in three home games Toronto announced its home attendance.

"The offence didn't play poor in my mind, they just didn't do things good enough," said Toronto head coach Corey Chamblin. "The defence didn't do the things we needed to do to help them out.

"Whether it's East or West, we have to learn to win games."

Edmonton defeated Toronto 26-0 on July 25 at Commonwealth Stadium. It was the Eskimos' first shutout win since 2014 and marked the first time since '09 the Argos hadn't scored a point in a game.

Toronto running back James Wilder Jr., was scratched, prompting speculation the 2017 CFL top rookie is on the trade block. Chamblin said Wilder Jr. , nursing a rib injury, asked to sit out another week and that the third-year pro isn't being shopped.

"He felt one more week would make him healthier," Chamblin said. "I know there's some rumours about him being traded (but) that hasn't been discussed."

Whyte's 15-yard field goal with no time left staked Edmonton to a 24-12 lead in an entertaining first half. It came after Crapigna connected from 32 yards out — his fourth of the half — at 14:22.