TORONTO — Every goal has a tale to tell and, on pace for a franchise-worst 66 goals against, Toronto FC can fill volumes this season. "It's the difference in our season," coach Greg Vanney said Tuesday.
Sep 25, 2018 4:42 PM By: Canadian Press 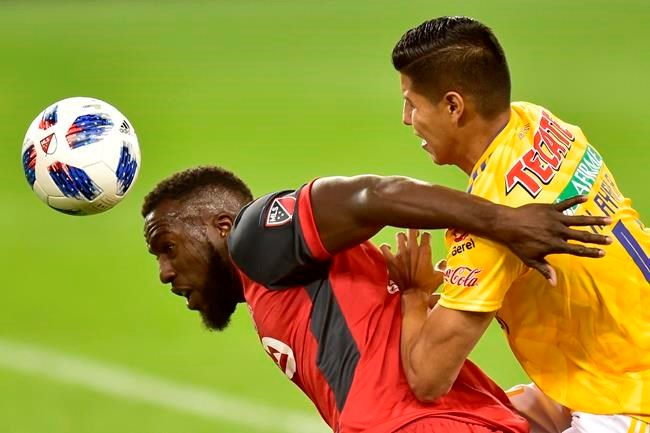 TORONTO — Every goal has a tale to tell and, on pace for a franchise-worst 66 goals against, Toronto FC can fill volumes this season.

"It's the difference in our season," coach Greg Vanney said Tuesday. "The amount of goals that we have given up is an enormous problem."

The latest goals, in Saturday's 2-0 loss at the New York Red Bulls, are another sorry story —  errors on top of errors.

The opener, in the 70th minute, was a 25-second real-time sequence that in the cool light of day takes Vanney some two minutes to verbally dissect.

It started with Jonathan Osorio taking a Toronto free kick in the Red Bulls end. The ball went to defender Nick Hagglund, whose attempted pass to Tosaint Ricketts was intercepted by Tyler Adams.

The Red Bulls midfielder popped the ball down the field in the air, with a retreating Hagglund unable to get his head to it. With Hagglund's body twisted around, Red Bulls forward Bradley Wright-Phillips got a foot to the ball and poked it to Derrick Etienne, whose cross from the byline deflected off a lunging Hagglund and landed in front of goal where goalkeeper Alex Bono, defender Chris Mavinga and Wright-Phillips all collided, leaving Argentina's Kaku to steer it home through three defenders.

"Now it becomes a scrum of sorts. You get on the wrong end and it ends up in the back of the net," said Vanney. "But I felt like we probably had four opportunities to deal with that play before it got to that point and at no point did we actually stop their ability to get to that area of the field which is right in front of our goal.

The second goal, in the 94th minute, followed a Toronto goal kick. After some aerial ping-pong, the ball went to Wright-Phillips who, evading an Osorio attempted tackle, tried to send a through ball to Etienne.

Toronto defender Eriq Zavaleta got a foot to it first but the ball went right back to the Red Bulls forward at midfield and his deft chip evaded a back-peddling Zavaleta, who fell over on the play after misjudging the ball, and found Etienne.

"At that point we're kind of in a crisis situation," said Vanney. "We've lost control of this action again and now they're in on goal."

Etienne then popped the ball over Bono in the net with three Toronto players racing towards him.

The end is near for Toronto, at least in terms of the post-season, with five games remaining.

Ninth-place Toronto (8-15-6) stands 10 points behind the Montreal Impact (12-14-4), who occupy the sixth and last playoff berth in the Eastern Conference. A Toronto loss or draw against eighth-place New England (8-10-11) on Saturday at BMO Field coupled with a Montreal win at seventh-place D.C. United (9-11-8) would mathematically end TFC's run at the playoffs.

Toronto got some encouraging news with word that striker Jozy Altidore's ankle injury may not be too serious.

Altidore, who has had foot and ankle problems before, limped off in the 48th minute Saturday. But Vanney says the U.S. international has not been ruled out of this weekend's game.

Fellow forward Sebastian Giovinco continues to work his way back from a calf injury that kept him out of the Red Bulls game. But veteran defender Drew Moor is listed as "very questionable" with a calf strain.

The Toronto defence has been hit hard with injuries this season with the absence of Moor and Mavinga particularly painful. In the absence of Moor, Vanney has taken to playing midfielder Michael Bradley in the back once again to direct the backline.

Nothing seems to work. Only the Los Angeles Galaxy (59), San Jose Earthquakes (63) and Orlando City (66) have conceded more goals than Toronto this season.

Minnesota United is tied with Toronto at 57 goals given up.

Couple a porous defence with a TFC team that is 0-14-1 when conceding the first goal and you have trouble.

Tuch scores in OT, Knights beat Avs 4-3 for top seed
Aug 8, 2020 6:58 PM
Comments
We welcome your feedback and encourage you to share your thoughts. We ask that you be respectful of others and their points of view, refrain from personal attacks and stay on topic. To learn about our commenting policies and how we moderate, please read our Community Guidelines.