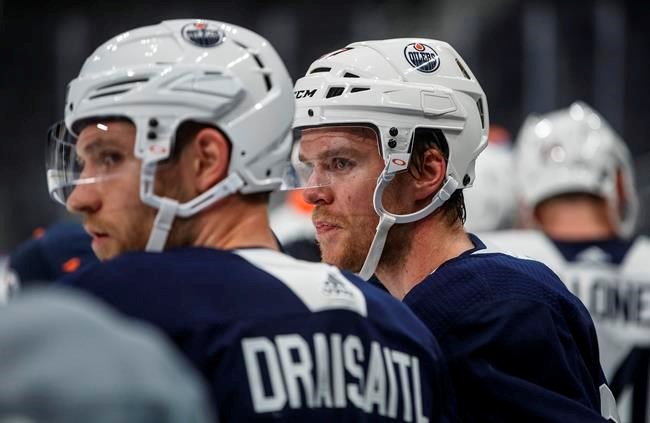 EDMONTON — It's so far, so good for Connor McDavid at training camp as he rehabs his knee.

The Edmonton Oilers' superstar captain was cleared for practice and didn't require a non-contact jersey as the team hit the ice Friday morning for the first time in camp.

He centred a line with Leon Draisaitl and Zack Kassian at Rogers Place, displaying his trademark cuts, slashes, and speed.

"I feel good," McDavid told reporters afterwards. "It was a complicated summer. Lots of stuff going on. Lots of different opinions.

"There was a time when (getting on the ice for camp) was definitely in doubt, but as of right now it's good."

McDavid, the second-leading scorer in the NHL last year (116 points), partially tore a left knee ligament five months ago in the last game of the 2018-19 regular season when he rammed into a goalpost at high speed against Calgary.

He didn't require surgery, but has been working to heal the knee all summer, and said it was good to get camp started.

"Lots of new faces — management, coaches, players — lots of new stuff going on so it's fun to be out there," he said.

McDavid and Draisaitl will be expected to carry the offensive load for the Oilers again this season.

Kassian, meanwhile, is coming off a career-high 15-goal campaign.

He said McDavid didn't show any rust or wear and tear.

Asked if it might be hard for McDavid to be quizzed daily on the injury, Kassian said it can be tiring.

"As athletes if you're injured, or you go through an injury, once you're healthy you always seem to have to answer questions about the injury for sometime after even when you're somewhat healthy," he said. "(But) it's part of the business."

The injury is a small tear in the posterior cruciate ligament, or PCL.

The PCL is a band of tissue that crosses inside the centre of the knee joint to connect the thigh bone to the lower leg. It keeps the knee stable when it moves forward or backward.

Oilers head coach Dave Tippett said the plan is to take it slow with McDavid to make sure he's 100 per cent when the regular season starts on Oct. 2.

McDavid is expected to see limited action, perhaps even none, in pre-season games.

"He won't play in any of the games this week. And we'll re-evaluate him at the end of the week.

Asked about McDavid being cleared for contact in practice, Tippett said: "He wanted no part of wearing another (non-contact) jersey."

The Oilers have a new general manager, Ken Holland, and new coach as they seek to return to the post-season after missing it for 12 of the last 13 seasons.

Defending champion Kevin Koe one of the headliners in strong Brier field
Feb 27, 2020 9:00 AM
Wednesday's Games
Feb 27, 2020 1:14 AM
Comments
We welcome your feedback and encourage you to share your thoughts on this story. We ask that you be respectful of others and their points of view, refrain from personal attacks and stay on topic. To learn about our commenting policies and how we moderate, please read our Community Guidelines.