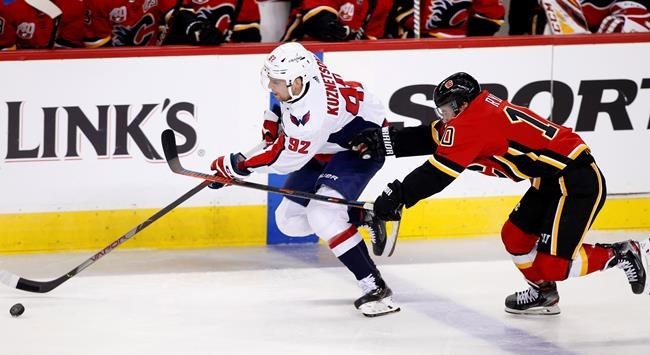 "Johnny for Norris. That's a hashtag right now," the Capitals captain said Tuesday after Carlson's two goals paced Washington to a 5-3 win over the Calgary Flames.

Carlson scored and added an empty-netter for an NHL-leading 20 points (five goals, 15 assists) in 11 games.

"It's a great thing obviously. I don't know what to say," Carlson said.

He has three games remaining this month to better the high of 25 points in 13 games set by MacInnis when he was a Calgary Flame.

Ovechkin had a goal and an assist and Tom Wilson also scored for Washington (7-2-2), while Chandler Stephenson got the credit on a Flames own-goal.

Elias Lindholm with his team-leading sixth goal, Tobias Rieder and Austin Czarnik countered for the Flames (5-5-1).

Cam Talbot stopped 25 shots in his second straight start of the season for Calgary.

The Capitals won their fourth in a row atop the Metropolitan Division, while the Flames suffered their first home loss in regulation this season.

"For good stretches of the game I felt we played well and carried the game, but ultimately it doesn't matter," Flames winger Matthew Tkachuk said. "We still didn't get any points tonight.

"They're a good hockey team, probably the best we've played this year. That was a good measuring-stick team.

"If we can take any positives it's that we carried stretches. I don't know the stats, but it's never a good thing when you're down going into the third. We had our chances, but not good enough."

Rieder scored with 16 seconds left in the game after Carlson's empty-netter at 18:15.

Wilson made it 4-2 on a feed from Lars Eller beating Talbot under his left pad at 12:34 of the third period.

Ten seconds after Czarnik pulled the Flames even at 2-2 in the second, Ovechkin quieted the Saddledome with a go-ahead goal at 16:35.

The Russian took a backhand dish from Nicklas Backstrom on a two-on-one and wired the puck home for his seventh goal of the season.

Czarnik scored his first pouncing on a loose puck and sweeping it past Holtby during a goal-mouth scramble for a T.J. Brodie rebound.

Trailing after two quick Washington goals in the first three minutes of the second period, Lindholm halved the deficit with a power-play goal at 3:19.

The Swede wristed a cross-ice feed from Johnny Gaudreau over Holtby's glove.

Stephenson's centring pass from behind Calgary's net deflected off Flames defenceman Rasmus Andersson and into the host team's net at 2:41.

Talbot mishandled Carlson's off-speed shot from the boards for Washington's first goal of the game 35 seconds into the period.

Calgary outshot the Caps 15-9 in a scoreless first period.

The Flames are at home to the Florida Panthers and Washington continues on the road against the Edmonton Oilers on Thursday.

Notes: Carlson is four points back of Kevin Hatcher (426) for the third-most points by a Capitals defenceman in franchise history. ... Ovechkin is four goals from passing Luc Robitaille (668) for 12th in all-time NHL scoring. ... Flames forward Sam Bennett was scratched a second straight game with an undisclosed injury.

This report by The Canadian Press was first published Oct. 22, 2019.

Saturday's Games
Jan 26, 2020 11:58 PM
Mary-Anne Arsenault beats curling legend Colleen Jones in Nova Scotia final
Jan 26, 2020 10:03 PM
Manitoba goes unbeaten to capture Canadian junior women's curling title
Jan 26, 2020 9:20 PM
Comments
We welcome your feedback and encourage you to share your thoughts on this story. We ask that you be respectful of others and their points of view, refrain from personal attacks and stay on topic. To learn about our commenting policies and how we moderate, please read our Community Guidelines.