MONTREAL — A year after finishing in second place, Canadian divers Jennifer Abel and Melissa Citrini-Beaulieu upgraded themselves to gold on Friday at the FINA Diving World Series.
0
Feb 28, 2020 10:45 PM By: Canadian Press 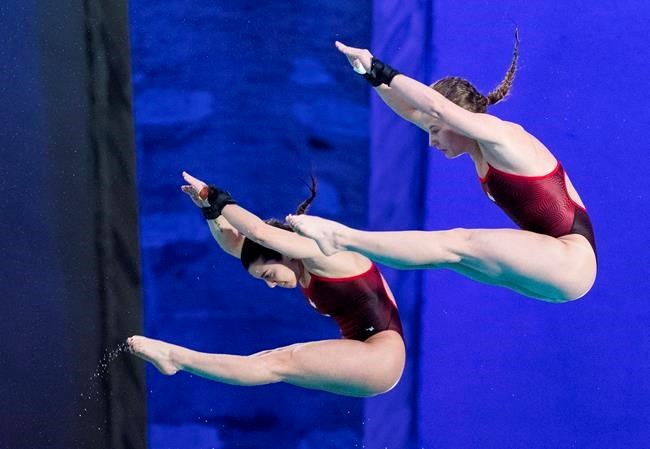 MONTREAL — A year after finishing in second place, Canadian divers Jennifer Abel and Melissa Citrini-Beaulieu upgraded themselves to gold on Friday at the FINA Diving World Series.

Abel and Citrini-Beaulieu ended the first round tied for first place and never looked back, finishing 12.63 points ahead of Mexico's Paola Espinosa and Melany Hernandez.

"It feels amazing," said Abel, a native of Laval, Que. "We couldn't ask for a better place to be than in Montreal and having the gold. Especially this year, it's really important for Melissa and I. We're both happy to win gold in our hometown."

Abel and Citrini-Beaulieu, who's from Saint-Constant, Que., capped a memorable day for Canadian divers.

Earlier, Montreal's Meaghan Benfeito, a three-time Olympic medallist, and Caeli McKay, a 20-year-old who hails from Calgary and won a silver medal at the 2018 Commonwealth Games, took home gold in the women's 10-metre synchronized event.

They scored 313.02 points, well ahead of second-place finishers Pandelela Pamg and Leong Mun Yee of Malaysia (297.66).

On the men's side, Vincent Riendeau and Nathan Zsombor-Murray won bronze in the men's 10-metre synchro platform. The Canadians finished with a score of 407.76, less than five points behind first-place Russians Aleksandr Bondar and Viktor Minibaev. Mexico's Ivan Garcia and Kevin Berlin won silver.

"We're really happy," said Riendeau. "It's fun to be on the podium of an international World Series event."

Like Abel and Citrini-Beaulieu, both Riendeau and Zsombor-Murray are from the Montreal area and savoured the opportunity to medal in front of friends and family.

"For sure we have an advantage by being at home in this pool," Riendeau said. "We're comfortable here."

"It's our best-ever international performance," said Zsombor-Murray, who won a gold medal with Benfeito in the mixed 10-metre synchro event in Montreal in 2017, his first career FINA World Series competition.

In the three-metre synchronized event, Montreal's Phillipe Gagne and Francois Imbeau-Dulac of St-Lazare, Que., were fourth.

Several members of the Canadian team have already secured berths at the 2020 Tokyo Olympics in July thanks to strong performances at the 2019 FINA World Championships in Gwangju, Korea.

Abel and Citrini-Beaulieu punched their tickets by winning a silver medal in women's three-metre synchro. Benfeito, McKay, and Riendeau, who was part of the Canadian team at the 2016 Summer Olympics in Rio Di Janeiro, each finished in the top-12 in the 10-metre platform competition.

"This year it's really important," said Abel. "Melissa and I will be in Tokyo competing so knowing that we're starting our season with a gold medal gives us even more excitement for the Games."

The Diving World Series, normally featuring up to five meets, has been cut to three meets this year because of the novel coronavirus. China, a diving power, is not competing this weekend.

Montreal is the first World Series stop, followed by Kazan, Russia and London.

This report by The Canadian Press was first published Feb. 28, 2020.

Harper, Matz latest MLBers to contribute to virus relief
Apr 3, 2020 7:07 PM
Comments
We welcome your feedback and encourage you to share your thoughts on this story. We ask that you be respectful of others and their points of view, refrain from personal attacks and stay on topic. To learn about our commenting policies and how we moderate, please read our Community Guidelines.