The COVID-19 outbreak has forced Canada Soccer staff to think outside the box in looking after their players scattered around the globe. The postponement of the Tokyo Olympics to 2021 poses a lot more questions, from scheduling to finances.
0
Mar 24, 2020 5:39 PM By: Canadian Press 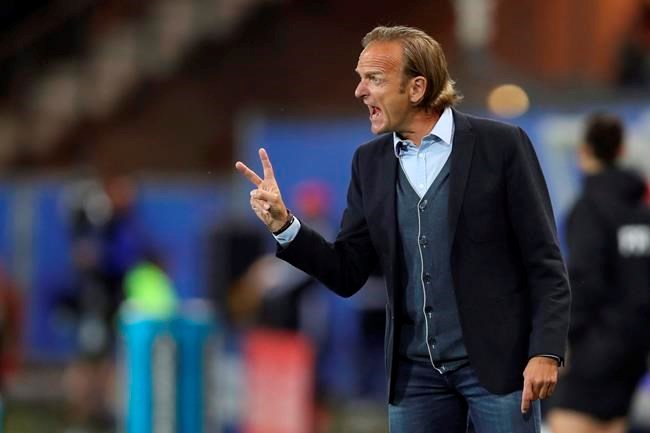 The COVID-19 outbreak has forced Canada Soccer staff to think outside the box in looking after their players scattered around the globe.

The postponement of the Tokyo Olympics to 2021 poses a lot more questions, from scheduling to finances. But women's coach Kenneth Heiner-Moller sees it as an opportunity to get better before the games.

While there are still more Olympic details to be ironed out, Heiner-Moller says he can finally start on a new blueprint.

"I haven't very deliberately and on purpose been working on a Plan B because the Plan Bs were definitely going to Cs and Ds and Es," said the Dane. "Are the games going to be postponed? Is it in the fall? Is it like a different venue? All that stuff."

"Now we can start looking at the next steps," he added.

For Heiner-Moller, that means building a schedule around the FIFA international windows. His team's dance card is currently empty.

He had hoped to have the women play five games in advance of the original July start of the Olympics. There was an April 14 match against seventh-ranked Australia in Vancouver that was called off due to the virus. The original plan was to have two more outings in the June window and perhaps two more while in Japan ahead of the Olympics.

Now he has more time, with the emphasis on the fall given the COVID-19 uncertainty in the near future.

"The timeline isn't clear but now you've got a whole year of looking (at), assessing the players, planning on FIFA windows ... The great thing is that we were only in limbo for about a day or so, from we knew we were not going to participate in 2020 to we know that we're actually going to be at the Olympics. Now it's just a little delayed."

Heiner-Moller was solidly behind the COC decision not to attend the games unless they were postponed.

"We did not feel it was safe for the athletes or anyone around the athletes — their families or coaching staff or any kind of staff — to train for the dream but also to jeopardize their health."

A new schedule means new costs so Canada Soccer, like other sporting bodies, will have to review its budget ahead of the games.

"It's reallocating, re-looking at everything," said Heiner-Moller. "Making sure, as we always do, that we look at every single dollar to see how we can spend it the best."

The immediate task is figuring out how to best support his players during the current hiatus. That has included workout programs and video analysis.

For veteran midfielder Diana Matheson, that means going for a run or working out at home. And more importantly setting an example in the fight against COVID-19 "by just continuing to do the right thing and spreading the message that way."

"I think there's going to be a lot more down time before we're back training," she added. "We'll get back to it at some point but it's not really the focus right now, to be honest."

While the Canadians players also get help from their clubs, the national side stays involved because different clubs have different resources when it comes to strength and conditioning as well as help from a mental health perspective.

"We've been in contact with all players," he said.

"As I said to all staff, this is the appropriate time to be innovative, inventive on how we can actually support our players in totally different environments that we're used to," he added. "To take that as a great opportunity."

It means creating individual plans for players pretty much in lockdown. An athlete based in Winnipeg faces different challenges than one in Orlando.

"It's definitely not one way of thinking fits all. It's very, very individual, not only for the players but also the conditions around them," said the coach.

Heiner-Moller is making his plans from home, with his wife and two kids aged 10 and 12, on the West Coast.

The eighth-ranked Canadian women are coming off a 0-1-2 performance at the Tournoi de France, where the team lost 1-0 to No. 4 France and tied the third-ranked Netherlands 0-0 and No. 9 Brazil 2-2.

This report by The Canadian Press was first published March 23, 2020.