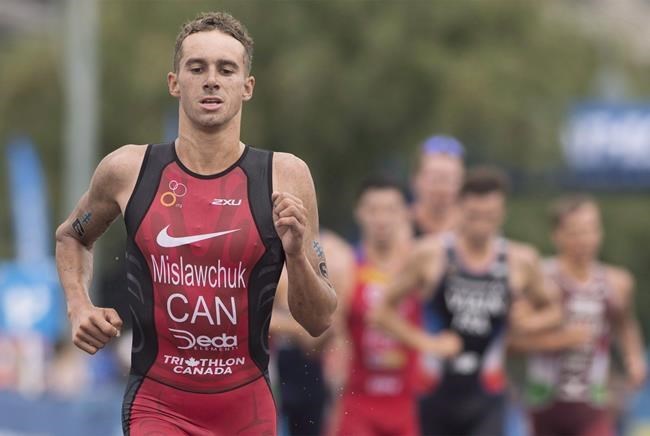 TOKYO — Tyler Mislawchuk became the first Canadian man to win a World Triathlon Series race when he claimed gold in an Olympic test event on Friday.

The 23-year-old from Oak Bluff, Man., completed the race in one hour 49 minutes and 51 seconds, four seconds ahead of second-place finisher Casper Stornes of Norway.

"I can't believe it," said Mislawchuk. "This is the biggest race outside of the Olympics for me, so it is just unbelievable."

Mislawchuk finished the swimming portion of the triathlon in 18:39, followed by a time of 59:34 on the bike. He capped the race with a 30:27 run at Odaiba Marin Park.

Earlier this summer, Mislawchuk became the first Canadian man to reach the World Triathlon Series podium when he won the bronze in Montreal.

On Friday, Mislawchuk and his Canadian teammate Matt Sharpe came out of the water of the two-lap, 1.5-kilometre swim in ninth and 11th place respectively to set themselves up perfectly to control the pack for the 40-kilometre bike ride.

The Canadian duo ran into second transition in eighth spot.

"I had good legs on the day and need to thank the boys out there for helping me out. We worked well as a team and I couldn't have done it without them," said Mislawchuk.

Mislawchuk was the second man off the blue carpet for the running portion of the race, storming onto the first of three laps.

Mislawchuk and Stornes dropped Wilde with two kilometres to go where they ran shoulder-to-shoulder before the Canadian pulled ahead in the final stretch.

"We prepared specifically for this. Hayden (Wilde) and I supported each other the whole way. We knew we were in it for the medals if we worked together," said Mislawchuk. "It came down to a sprint and I had the legs."

Sharpe and fellow Canadian Alexis Lepage did not finish the race.

It has been a long road back to the top of the international standings for Mislawchuk following a 15th-place result at the 2016 Olympic Summer Games — a race that capped a year in which he had four, top-10 finishes.

In the season following the Olympics, Mislawchuk struggled to find his way into the top-10 while battling through a leg injury.

Wolfpack looking for new ownership with majority owner David Argyle stepping aside
Aug 3, 2020 8:17 PM
Comments
We welcome your feedback and encourage you to share your thoughts. We ask that you be respectful of others and their points of view, refrain from personal attacks and stay on topic. To learn about our commenting policies and how we moderate, please read our Community Guidelines.