Toronto FC coach Greg Vanney, looking to diffuse expectations, says it will take more than one player to replace injured captain Michael Bradley. But it seems clear Liam Fraser is next man up.
0
Jan 21, 2020 3:59 PM By: Canadian Press 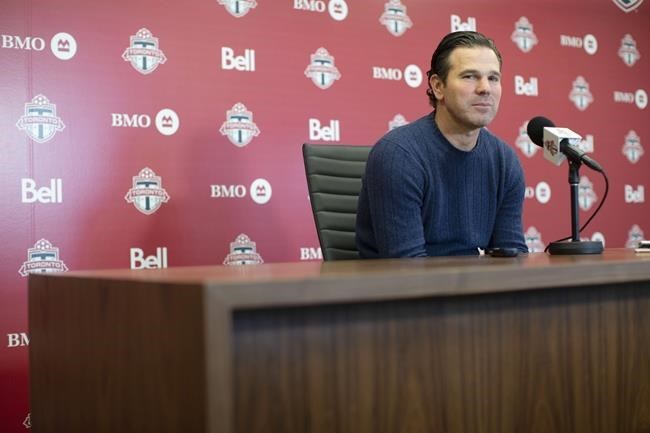 Toronto FC coach Greg Vanney, looking to diffuse expectations, says it will take more than one player to replace injured captain Michael Bradley. But it seems clear Liam Fraser is next man up.

The 21-year-old from Toronto has played 19 games (16 starts) over the last two seasons, patiently waiting his turn in TFC's crowded midfield. With Bradley slated to miss four months after ankle surgery, his time is now.

Last October, Fraser was candid about waiting in the wings. At the time, he had not started a game since July 20 in a 3-1 loss to Houston. He made the matchday 18 just twice after that game.

"I feel I'm able to be patient because the times when I'm not playing, I'm still learning a lot,'' he told The Canadian Press back then. "So it's not like I'm standing still. I'm still moving forward a bit and learning from Michael and learning from other players in the team and the coaching staff.

"I would never say I'm stagnant, I'm not doing anything. But again it is hard not getting those opportunities sometimes when I feel I deserve them. But it's the life of a footballer. It's the life — ups and downs.''

Bradley's down has proved to be Fraser's up, although the MLS club is looking to avoid piling pressure on the youngster.

"It'll be time for somebody else to step up and have an opportunity to fill those shoes," Vanney said. "As a group, we'll have to do it. I don't think it's just one guy who's going to fill it. As a team and as a midfield, guys will have to step up and fill the space."

Having said that, Vanney then switched his attention to Fraser, who started seven straight games last summer while teammates were away at the Gold Cup.

"We also have Marky (Delgado), we have Oso (Jonathan Osorio). We still have a very strong midfield."

Fraser said all the right things Tuesday, opening by wishing Bradley a speedy recovery "because he plays such a big part in this club."

"For myself personally, it's an opportunity to show and perform, (show) that I'm ready for this level on a consistent basis. If Greg gives me the opportunity," he added.

"Again, nothing is set in stone yet, nothing is locked. So I'm going to work really hard during the pre-season to get that opportunity. And when it comes, I know I'll be able to do the job."

Fraser is a cool customer, not short on confidence.

He demonstrated that Oct. 15 when Canada hosted the U.S. in a key CONCACAF Nations League match at BMO Field. Starting on the bench, Fraser was called into action in the ninth minute when Mark-Anthony Kaye was injured.

Making his Canadian debut before family and friends in his hometown, Fraser coolly fit in alongside Samuel Piette and helping stifle the Americans in a memorable 2-0 win. He won three more caps this month, facing Barbados twice and Iceland once.

He reckons his time with Canada this month has helped him get ready for Toronto's pre-season.

"I'm excited and anxious to get into this opportunity," said Fraser.

Had Bradley not been sidelined, there was talk Toronto might loan Fraser out to get him more playing time. He's not going anywhere now.

At 32, Bradley leaves big shoes to fill. As defensive midfielder, he restores order when needed and often ignites attacks. And in his role as captain, he sets the team tone for commitment.

Fraser has good on-field vision with a passing ability to match, not to mention a modest US$75,875 salary last season. Bradley, who has a wealth of experience both for club and country (151 caps), made $6.5 million in 2019 although his salary this season will be around $1.53 million having given up his designated player status to accept a new deal using targeted allocated money.

Tuesday was a quiet day at the TFC training ground in the wake of an explosive Monday that saw the club drop the Bradley injury bombshell. Star striker Jozy Altidore added to the drama by ripping the team for its handling of the Bradley injury, which dates back to the Nov. 10 MLS Cup final in Seattle.

The club worked out under the bubble at its snowy training centre Tuesday. The players have Wednesday off before flying to Orlando for warm-weather training.

Defenders Eriq Zavaleta and Julian Dunn and midfielder Noble Okello have all switched numbers this season, taking over numbers from departed players.