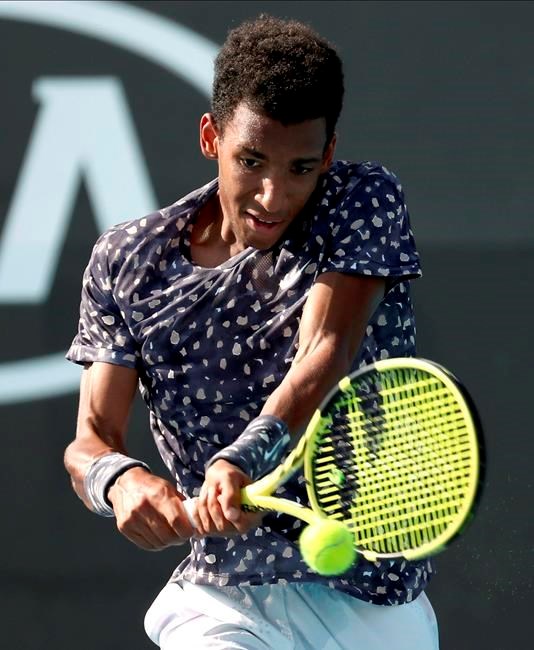 The 19-year-old from Montreal defeated French veteran Gilles Simon 7-5, 7-6(2) on Saturday to reach the final of the Open 13 Provence men's event. Auger-Aliassime saved two-of-three break points en route to his 12th win in 19 matches this season.

Auger-Aliassime dropped a 6-2, 6-4 decision to France's Gael Monfils last weekend in the final of the ABN AMRO World tennis tournament in Rotterdam.

Auger-Aliassime rallied from a break down to win the first set in just over an hour. After Simon held serve to go up 6-5 in the second, Auger-Aliassime did the same emphatically at love to force the tiebreaker.

The Canadian finished with fives aces in the match _ Simon had one _ and won 79 per cent of points on his first serve compared to 67 per cent for his opponent. Auger-Aliassime converted two-of-six break opportunities while Simon was one-for-three.

Tsitsipas advanced with a 7-5, 6-3 semifinal victory against Alexander Bublik. The second seed from Greece had six aces and broke his strong-serving Kazakh opponent's serve three times, dropping his own once.

Playing only his third semifinal at this level, Bublik competed well and hit eight aces.

The 21-year-old Tsitsipas will aim for his fifth career title when he faces Auger-Aliassime.

This report by The Canadian Press was first published Feb. 22, 2020.

The Associated Press contributed to this report

Powell hopes to compete for Canada after promising NBA season cut short
Apr 3, 2020 10:28 AM
Comments
We welcome your feedback and encourage you to share your thoughts on this story. We ask that you be respectful of others and their points of view, refrain from personal attacks and stay on topic. To learn about our commenting policies and how we moderate, please read our Community Guidelines.