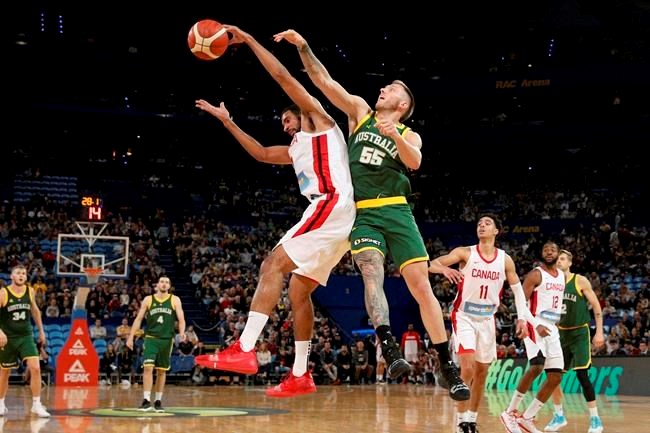 The Canadians trounced Australia 90-70 in the opening game of the exhibition series on Friday.

"They punched us in the mouth tonight, became more physical, more aggressive, all because we came out more physical yesterday," said Birch. "We kind of knew they were going to come with that approach tonight, but we weren't ready for it."

Jock Landale led the Australian Boomers with 13 points while Jonah Bolden had 12.

The Canadians led by as many as nine points in the third quarter Saturday, but trailed 60-59 heading into the fourth. Then they went ice cold, going 2-for-10 from the field in the early minutes as Australia went up by nine.

Canada pulled to within three with 3:30 to play on six straight points from Birch, but that was as close as the Canadians would come down the stretch.

"I thought it was very positive for us, these two games. I thought we played extremely well," said associate head coach Gordie Herbert. "We competed, we played as a team. Obviously, last night we shot a little bit better from three-point land."

Canada tips off the World Cup against Australia on Sept. 1 in China.

Canada goes into the World Cup without most of their NBA stars. Miami Heat's Kelly Olynyk became the latest big-name player to pull out after sustaining a knee injury. He joined Andrew Wiggins, Jamal Murray, R.J. Barrett, Tristan Thompson, Dwight Powell, and Shai Gilgeous-Alexander as other top Canadian NBA players to miss the World Cup.

Sacramento Kings point guard Cory Joseph isn't in Australia, but could rejoin the team for the World Cup.

The Canadians will play New Zealand in a pair of exhibition games on Tuesday and Wednesday before wrapping up its pre-tournament schedule against the United States on Aug. 26

The Australian Boomers host the Americans in a pair of games next week.

Wild blank Canucks 3-0 to take early series lead, Stalock earns shutout
Aug 3, 2020 2:48 AM
Coyotes start fast, hold off Predators 4-3 in Game 1
Aug 3, 2020 2:00 AM
Sunday's Games
Aug 3, 2020 1:49 AM
Comments
We welcome your feedback and encourage you to share your thoughts. We ask that you be respectful of others and their points of view, refrain from personal attacks and stay on topic. To learn about our commenting policies and how we moderate, please read our Community Guidelines.