PERTH, Australia — Canada never trailed and outscored Australia 23-13 in the final quarter for a 90-70 upset win over the home side in a FIBA World Cup warmup basketball game Friday.
0
Aug 16, 2019 10:48 AM By: Canadian Press 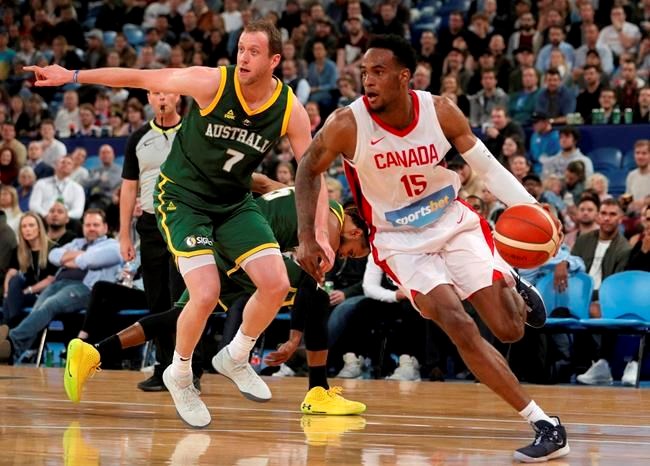 PERTH, Australia — Canada never trailed and outscored Australia 23-13 in the final quarter for a 90-70 upset win over the home side in a FIBA World Cup warmup basketball game Friday.

The Canadians (2-1 in exhibition play this summer) led 51-36 early in the third quarter but Australia rallied to draw level before the visitors dominated the final period for an easy win. The teams meet again on Saturday night at the same stadium in Perth.

"When we can come out and play that aggressive and knock down shots like that, it's great against a tough team like Australia," said Canadian guard Kevin Pangos, who led the team with 18 points on 7-of-10 shooting. "We've just to continue and keep growing as a team."

Australia plays Canada in their first game of the World Cup on Sept. 1 in China.

Canada goes into the World Cup without most of its NBA stars. The Miami Heat's Kelly Olynyk became the latest big-name player to pull out after sustaining a knee injury. He joined Andrew Wiggins, Jamal Murray, R.J. Barrett, Tristan Thompson, Dwight Powell, Shai Gilgeous-Alexander, Chris Boucher and Nickeil Alexander-Walker as other top Canadian NBA players to miss the World Cup.

Pangos, from Newmarket, Ont., added six assists and four steals for Canada. The team is being coached by Toronto Raptors coach Nick Nurse, who led the team to the NBA championship this season.

"Within our locker room, we're focused on who is here," Pangos said. "I think that's the most important thing. When you think about all the other stuff, that becomes unnecessary and a distraction. We're excited with the group we have. We're going to try to grow the best we can ... and try to peak at the worlds."

Nembhard, entering his second year at the University of Florida, added a team-high 10 rebounds and four assists.

"He gets places easy and I'm not quite sure how he does it," Nurse said of Nembhard. "I'm trying to figure it out. He's got this head fake, he's in, he's out, he's over, he's around, and all of a sudden he's into some clear space. He's got a funky game a little bit, for a 19-year-old kid, a pretty good game."

Sacramento Kings point guard Cory Joseph of Toronto was not in the lineup for Canada.

Canada stays in Australia to face New Zealand in a pair of exhibition games Aug. 20-21 before wrapping up its pre-tournament schedule against the United States on Aug. 26