WINNIPEG — Blake Wheeler was glad the Winnipeg Jets cranked up their effort before running out of time on Sunday. Wheeler and Joona Luoto had third-period goals 72 seconds apart as the Jets defeated the Calgary Flames 4-1 in exhibition play.
0
Sep 22, 2019 11:41 PM By: Canadian Press 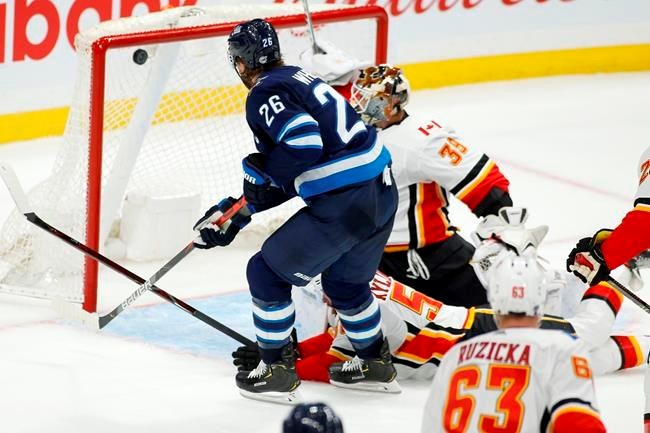 WINNIPEG — Blake Wheeler was glad the Winnipeg Jets cranked up their effort before running out of time on Sunday.

Wheeler and Joona Luoto had third-period goals 72 seconds apart as the Jets defeated the Calgary Flames 4-1 in exhibition play.

“It was just kind of one of those games where you just get through it,” said Wheeler, who also had an assist. “We turned it on a little bit in the third, so that was good.”

Jack Roslovic scored 50 seconds into the game. Nikolaj Ehlers added an empty-goal with 1:36 remaining in the third.

Flames forward Adam Ruzicka had tied the game 1-1 at the six-minute mark of the third.

Brossoit was playing in his second pre-season game. Both were wins and he's only allowed two goals.

“I was working on a lot of stuff over the summer,” Brossoit said. “I just feel pretty stable and pretty confident right now.”

Talbot welcomed a full game in net, despite Roslovic using a rebound off a Tucker Poolman shot from the point to open the game's scoring.

“It was huge,” Talbot said of his playing time. “I felt really comfortable throughout the entire game.

“Once you give up a goal early like that, sometimes you can try to do a little too much and get away from your game. I thought I was tracking the puck pretty well the rest of the game.”

Shaw fired a shot that Talbot quickly stretched out his pad to save, then he broke up Calgary forward Austin Czarnik's breakaway that came after teammate Logan Stanley's giveaway.

With Jets defenceman Dmitry Kulikov in the penalty box for boarding Flames forward Glenn Gawdin, Ruzicka tied it up by flipping the puck over Brossoit's stretched pad.

Gawdin, who slid into the corner and hit more of his shoulder than his head against the boards, said after the game he was fine.

Jets defenceman Anthony Bitetto's shot went off the skate of Oliver Kylington and the puck slid over to Wheeler, who deposited it into an open side of the net at 9:43.

Luoto then deflected in Stanley's shot at 10:55 to stretch the lead. Ehlers sealed the win at 18:24.

Winnipeg had Mark Scheifele and Wheeler back together on the top line with Ehlers.

“They got some good shifts against a real good line in the Scheifele line so it's an eye-opener,” Peters said. “Now it gives you an idea where you have to be to be able to play in this league.”

Calgary left a lot of veteran forwards at home, but its defence included T.J. Brodie, Michael Stone and Andrew MacDonald on his professional tryout contract.

The Jets travel to take on the Flames again Tuesday.

This report by The Canadian Press was first published Sept. 22, 2019.

Canucks GM says team could hold camp in U.S. due to Canada's quarantine rules
May 27, 2020 7:41 PM
Calgary Flames have a lot of time to think about the Winnipeg Jets
May 27, 2020 7:29 PM
Comments
We welcome your feedback and encourage you to share your thoughts. We ask that you be respectful of others and their points of view, refrain from personal attacks and stay on topic. To learn about our commenting policies and how we moderate, please read our Community Guidelines.