Best in the West: Eskimos host Bombers in shocase of top CFL teams

EDMONTON — From the moment they broke training camp facing a season of significant change after missing the 2018 playoffs, the Edmonton Eskimos have insisted that if they focus on the process, the results will take care of themselves.
0
Aug 22, 2019 5:21 PM By: Canadian Press 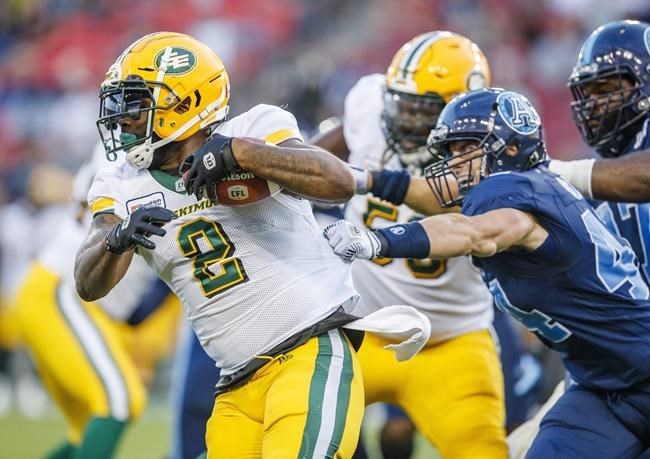 EDMONTON — From the moment they broke training camp facing a season of significant change after missing the 2018 playoffs, the Edmonton Eskimos have insisted that if they focus on the process, the results will take care of themselves.

Halfway through the season and sitting at 6-3 after a 41-26 win over the Toronto Argonauts, the Eskimos face the 7-2 Winnipeg Blue Bombers at Commonwealth Stadium Friday with first place in the West Division on the line.

Win or lose, the focus remains the same.

"I firmly believe it's not about the result. It's who you become, what type of team and who you're becoming through the process," quarterback Trevor Harris said.

"The results (will) take care of themselves. For us, it's obviously a bigger game because it's a West versus West game, but that doesn't change our process and what we're trying to do each week."

The Eskimos put up 445 yards of total offence, including 345 through the air by Harris, but they couldn't finish in a 28-21 loss to the Bombers June 27. All their points came from the foot of Sean Whyte, who had a career-high seven field goals.

Finishing wasn't a problem last Friday in Toronto. The Eskimos scored touchdowns on their first three possessions – they hadn't done that since a 27-7 win over the B.C. Lions Sept. 26, 2003 — and they came away with points from seven of their 11 drives. The 41 points is a season high.

The Bombers come in after beating the Lions 32-16, but it was a costly win. Quarterback Matt Nichols was injured on a tackle by Shawn Lemon in the fourth quarter and has since been put on the six-game injured list.

That leaves second-year back-up Chris Streveler staring into the teeth of a high-pressure Edmonton defence that leads the league in a handful of categories, including sacks, with 30.

"Sure, it is," defensive co-ordinator Phillip Lolley said when asked if it's different preparing for Streveler instead of Nichols. "A lot of people say you play it the same. No.

NO THANKS — With Streveler having just 17 games on his CFL resume, Winnipeg put out several calls for quarterbacks. One was to retired Kevin Glenn, who played with the Bombers 2004-08 and in 2016. The 40-year-old said no thanks. Streveler has seen action in five games this season. He has nine completions on 16 attempts for 82 yards, one TD and three interceptions.

TOP CANADIAN — Winnipeg running back Andrew Harris rushed for 73 yards against the Lions to surpass Ben Cahoon as the CFL career leader in yards from scrimmage for Canadians. Harris sits at 13,377 combined yards with 8,477 rushing and 4,900 more receiving. Cahoon is second at 13,368.

DEJA-VU — Greg Ellingson's 10 catches for 170 yards in Toronto are the exact numbers he had against the Argonauts on July 8, 2017 while he was with Ottawa. Ellingson has had 10 catches in a game three times in his career. His single-game high for receptions is 11, set against Montreal last season.