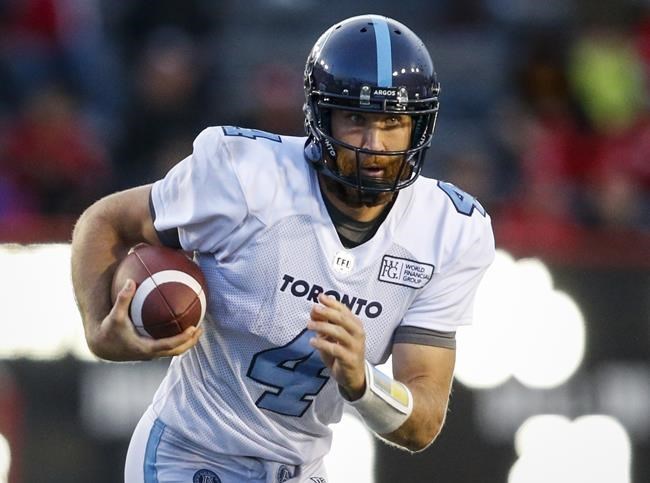 Bethel-Thompson finished just 6-of-18 passing for 90 yards with an interception July 25 when Edmonton (5-3) dispatched Toronto 26-0 at Commonwealth Stadium. It was the Eskimos' first shutout win since 2014 and marked the first time since '09 the Argos hadn't scored a point in a game.

The two teams meet again Friday night at BMO Field. It will be the first game for Toronto (1-6) since Bethel-Thompson rallied the squad to a thrilling 28-27 home victory over the Winnipeg Blue Bombers on Aug. 1.

In a season that's been chock full of challenges, Bethel-Thompson said the loss in Edmonton was his lowest point.

"I learned what death felt like and maybe that's a metaphor but maybe it's not," Bethel-Thompson said Thursday. "(What) it feels like to be too far into it, to want it too much, to make it life or death and when you get punched in the mouth.

"When you're too far into it what the game can feel like, how everything can feel too fast or too out of control and what you need to do to just kind of breathe and come back into the moment. If you're playing two steps ahead of yourself you're never going to see what's right in front of your face. It was a good learning experience."

And the lesson learned?

"Be myself, play my game and be in the moment," he said. "If I can play my game I'm going to have a lot of success.

Bethel-Thompson looked good against Winnipeg, completing 37-of-49 passes for 343 yards and three TDs while rushing for 44 yards on five carries. Bethel-Thompson's 11-yard touchdown pass to S.J. Green with 13 seconds remaining tied the score 27-27 before Tyler Crapgina booted the game-winning convert.

"It was a great death that night (loss to Edmonton) and it was a beautiful rebirth after that," Bethel-Thompson said.

Ideally, Bethel-Thompson would've preferred Toronto playing the following week rather than going on a bye. But he said there are benefits to having some down time.

"The quick answer is yeah, I would've wanted to get right back on the field," he said. "We got on a roll at the end of that game . . . but my body feels better than it did.

"That was a long road stretch (three straight games away from BMO Field before facing Winnipeg) and we needed a break from football. That's why this game is so important, to get us back rolling going into this stretch."

"That was the last little bit of juice we had with all the stuff we went through," he said. "You can see now the guys are a lot fresher.

"I think the biggest thing with the win is you'll reset yourself and find yourself back in a positive mindset. It creates more positive energy not only in the locker room but outside the locker room."

Edmonton comes off a 16-12 win over Ottawa as CFL passing leader Trevor Harris (2,631 yards) finished 33-of-40 passing for 327 yards in his first game against his former team. C.J. Gable ran for 116 yards and two TDs on 18 carries while adding four catches for 34 yards.

Harris has recorded 20 or more completions in 21 straight games, just three short of the CFL record held by Ricky Ray, the former Eskimo/Argo who retired earlier this year.

"The good thing is this is our second time seeing them," Chamblin said. "We should be better prepared for what we're going to see.

"They'll have their wrinkles and we'll have to adjust to it but they won't have 1,000 wrinkles."

Toronto is also expecting a season-high home crowd with the CNE opening Friday.

"It just means we're the main attraction," Chamblin said with a chuckle. "We understand we're in the entertainment business and we get paid to perform.

"You want to perform in front of a big crowd. I think it will be huge to have them."

DOMINANT ESKIMOS: Edmonton has won the last two meetings versus the Argos and six of the last eight. But the Eskimos haven't been victorious in Toronto since 2016.

TURNOVER ISSUES: Toronto has committed more turnovers than its opponent in every one of its games this year. The Argos are lost overall in turnover ratio at -17.

PENALTY TROUBLES: Edmonton is the CFL's most-penalized team (105) and has been flagged 10 or more times in all eight of its games this season.