After an unsettled off-season, the Montreal Alouettes can look forward to the welcomed distraction of actually playing football.
0
Jun 12, 2019 12:25 PM By: Canadian Press 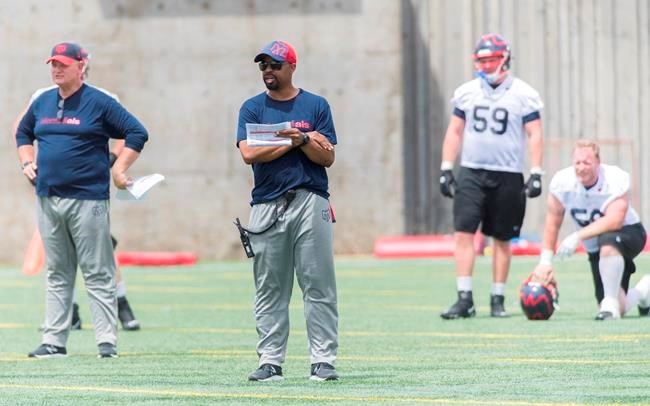 After an unsettled off-season, the Montreal Alouettes can look forward to the welcomed distraction of actually playing football.

The once-proud franchise is now being run by the CFL, which took over ownership May 31 from American businessman Bob Wetenhall and his son, Andrew.

The league heads into the season opener on Thursday owning one of its nine franchises amidst seemingly endless speculation regarding who'd be the club's new owner — a group represented by former player Eric Lapointe, businessman Clifford Starke and entrepreneur Anthony Guzzo have been three of the reported candidates. However, a league source said Monday that Montreal natives Peter and Jeffrey Lenkov head up a partnership that's currently doing its due diligence on the club.

Peter Lenkov, 55, is a producer in Hollywood while Jeff Lenkov, 53, is a lawyer practising in California. The source was granted anonymity because he's not authorized to speak on the deal.

But not all of the off-season drama has come from the boardroom. Last Saturday — less than a week before their season opener in Edmonton on Friday — the Alouettes parted way with head coach Mike Sherman with offensive co-ordinator Khari Jones assuming the top job on an interim basis.

The CFL season kicks off Thursday night with the Hamilton Tiger-Cats hosting the Saskatchewan Roughriders. Montreal will play its first two games on the road (Friday night in Edmonton, then June 28 in Hamilton) before facing the Ticats at Molson Stadium on July 4 in its home opener.

The opening week will conclude Saturday with a pair of games — the Ottawa Redblacks visit the defending champion Calgary Stampeders in a Grey Cup rematch while the B.C. Lions host the Winnipeg Blue Bombers.

Whoever takes over the Alouettes faces an uphill battle. The franchise has reportedly lost $50 million since Bob Wetenhall bought it in 1997, including $25 million the past three years and $12.5 million in 2018.

The CFL has steadfastly refused to discuss specifics regarding any proposed sale of the Alouettes. Commissioner Randy Ambrosie has said there's no definite timetable regarding a deal for the Alouettes, adding it's more important the best agreement be reached and not the fastest.

Here are some other key storylines heading into the season:

It's said the only constant in pro sports is change, and that certainly applies to the Grey Cup-champion Stampeders and East Division-winning Redblacks.

Since posting a 2-16 record in its inaugural '14 season, Ottawa has been to the CFL playoffs four straight years. It has finished atop the East Division three times and appeared in three Grey Cup games, winning in 2016.

Edmonton responded by signing Harris through 2020 to a reported average salary of $525,000 in free agency.

Reilly's return to B.C. spelled the end of Jonathon Jennings' time with the Lions. He signed as a free agent with Ottawa, where he'll start the season backing up Dominique Davis.

James Franklin opens as Toronto's starter after veteran Ricky Ray, who missed most of last season with a neck injury, retired to end his illustrious CFL career. And in Montreal, Antonio Pipkin has secured the No. 1 job following the off-season departure of Johnny Manziel.

Claybrooks is one of four new CFL head coaches as he replaces the legendary Wally Buono, who retired after the '18 season to cap a 46-year tenure as a player, coach and executive.

But Claybooks also has a solid resume. Calgary's defence allowed the fewest points in the league over his three seasons as defensive co-ordinator and like Buono, he is a former player, having spent 11 seasons as a defensive tackle in the NFL, NFL Europe and CFL. Claybrooks also earned a Super Bowl ring in '03 with the Tampa Bay Buccaneers.

Corey Chamblin returns to Toronto as its head coach after serving as defensive co-ordinator during the club's 2017 Grey Cup run. Chamblin has previous CFL head-coaching experience with Saskatchewan, leading the Riders to the 2013 Grey Cup title.

In Hamilton, Orlondo Steinauer begins his first season as the Tiger-Cats' head coach.

CFL rosters will have an international flavour this year as each team will carry one global player and two in 2020. That will boost game-day rosters to 46.

That has allowed CFL teams to work out their players and conduct separate drafts of Mexican and European talent.

The CFL announced a Mexican television deal on Wednesday.

Hooker Andy Ackers leaves Toronto Wolfpack for the Salford Red Devils
Jun 4, 2020 4:42 PM
Comments
We welcome your feedback and encourage you to share your thoughts. We ask that you be respectful of others and their points of view, refrain from personal attacks and stay on topic. To learn about our commenting policies and how we moderate, please read our Community Guidelines.