THE PAS, Man. — A woman arrested in northern Manitoba for online comments threatening violence against Indigenous people has asked for forgiveness and says she has learned valuable lessons.
0
Feb 14, 2020 1:19 PM By: Canadian Press 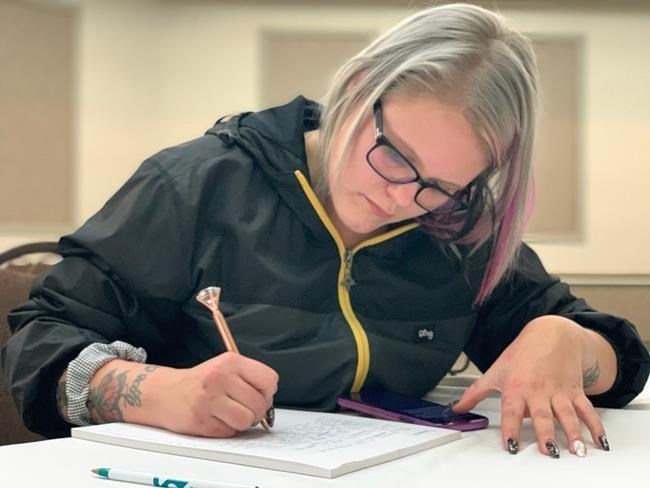 THE PAS, Man. — A woman arrested in northern Manitoba for online comments threatening violence against Indigenous people has asked for forgiveness and says she has learned valuable lessons.

Destine Spiller wrote an apology at her final mediation circle Thursday in The Pas before reading it to elders and First Nations leaders. The group held hands, cried and prayed together.

"I uttered the statements out of anger and realized too late that these comments were hurtful," said Spiller. "I have over and over wished I could take the statements back."

Spiller and another woman were arrested on suspicion of uttering threats and on public incitement of hatred after the Facebook comments apeared in the summer of 2018.

A Facebook account under Spiller's name posted photos of a vandalized car in Flin Flon, Man., and proposed a "shoot a Indian day" in retaliation.

Comments under the other woman's name suggested a "24-hour purge" and "Let's grab Budweiser and some shot guns."

The two women were not formally charged. Instead, the province's Justice Department said the case was referred to the Restorative Justice Centre, which organized mediation circles over the last year between Spiller and Manitoba Keewatinowi Okimakanak, a group that represents northern First Nations.

Christian Sinclair, the onekanew or leader of the Opaskwayak Cree Nation, said it's believed to be the first time in Canada that a mediation circle has been used for a non-Indigenous offender.

"We can deal with this business in a way that people come out of it feeling better about themselves, about justice being served in that context," Sinclair said. "We are all learning and are all human beings at the end of this day and we have to live in this world together."

It was clear that Spiller had no knowledge of Indigenous people, he added, and the restorative justice was about education rather than retribution.

"(It was) through a First Nations lens as opposed to the European justice system that's about punitive approaches," he explained.

"It becomes an opportunity of doing justice in a new way where it truly is restorative. Nobody came out of there feeling punished or ashamed. It was about making everybody a better person going forward."

The first mediation circle a year ago began with Spiller reading out the Facebook posts to community members.

She also had a year to meet seven conditions based on Cree laws, values and traditions, including writing the apology and an essay on Indigenous issues.

She performed 80 hours of community service at a friendship centre and took an anger management program. She was also required to learn about the history of First Nations in Canada, residential schools, the '60s Scoop and ongoing issues faced by Indigenous people.

Irene Young, the elder who facilitated the mediation circles, said it was challenging at times but turned out to be successful for everyone.

"With our way of dealing with things, it's a healing process, right. It's a personal development," she said.

The woman arrested with Spiller stopped attending the mediation circles last February. Manitoba Justice officials recently contacted Young about allowing the woman to start over. A decision has not been made.

The department said there were no updates, but prosecutors have two years from the time of the Facebook comments to lay criminal charges.

Spiller, who flew from Alberta to attend the final mediation circle, said she lost her ability to work in her home province of Manitoba. A hair salon in Flin Flon said she couldn't keep her job there after extensive condemnation of the comments online.

"You can be assured that I have learned a very valuable life lesson and will remember it for the rest of my life," Spiller said.

This report by The Canadian Press was first published Feb. 14, 2020

— By Kelly Geraldine Malone in Winnipeg

Saskatoon protest springs up, even after Trudeau orders blockades torn down
Feb 22, 2020 8:29 PM
Canadian L'Arche group shocked by report that founder sexually abused women
Feb 22, 2020 8:12 PM
Governor general says multiple solutions needed for 'complicated' overdose issue
Feb 22, 2020 8:08 PM
Comments
We welcome your feedback and encourage you to share your thoughts on this story. We ask that you be respectful of others and their points of view, refrain from personal attacks and stay on topic. To learn about our commenting policies and how we moderate, please read our Community Guidelines.