OTTAWA — Iran did not plan last year's deadly downing of a passenger jet in advance, but a series of failures by the regime's civil and military authorities set the stage for the shoot-down of PS752 minutes after it took off, a forensic report has fo
Jun 24, 2021 8:59 PM By: Canadian Press 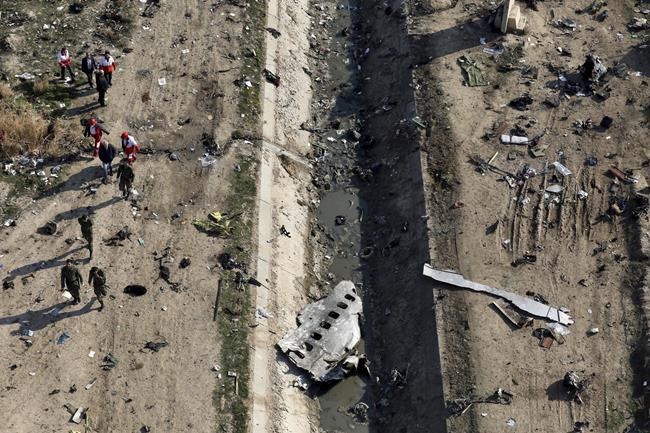 OTTAWA — Iran did not plan last year's deadly downing of a passenger jet in advance, but a series of failures by the regime's civil and military authorities set the stage for the shoot-down of PS752 minutes after it took off, a forensic report has found.

Released Thursday after an eight-month investigation, the report says Iran failed to ensure its air safety or notify airlines about its military activities when it launched a missile strike against a pair of U.S. bases across the border in Iraq hours before the plane was shot down on Jan. 8, 2020.

All 176 people on board Ukraine International Airlines Flight 752 were killed, including 55 Canadian citizens, 30 permanent residents and dozens of others bound for Canada. The Tehran-Kyiv route has been a popular first leg of a trip from Iran to Canada.

In a scathing message accompanying the report, Prime Minister Justin Trudeau blamed Iranian authorities for the missile attack, which he attributed "to their recklessness, incompetence, and wanton disregard for human life."

The report by Jeff Yaworski, former deputy director of operations at the Canadian Security Intelligence Service, concludes that a surface-to-air missile (SAM) operator misidentified the passenger plane as a "hostile target." It also highlights "command and control failures" that opened the door to disaster.

"Iran’s account refuses to analyze the full range of deficiencies in the military sector that played a major role in the downing," the study says.

"While the forensic team found no evidence that the downing of Flight PS752 was premeditated, this in no way absolves Iran of its responsibility for the death of 176 innocent people. Iran is ultimately responsible for the actions it took — or failed to take — which led to the shoot-down."

The study relies partly on intelligence as well as a report from Iran's civil aviation authority, and comes after the regime blocked Canadian and Ukrainian investigators from a comprehensive on-site analysis.

"It also shows how Iran has covered up information, bulldozed the crash site, providing only a misleading and superficial account of events," Foreign Affairs Minister Marc Garneau said Thursday at a virtual news conference.

The analysis comes three months after the federal government rejected outright the Iranian aviation authority's report, which blamed "human error" as the reason why the Iranian military shot down the jetliner minutes after takeoff from the Tehran airport.

"It places all of the blame on people lower down in the structure, and that is totally unacceptable," Garneau said.

"We’re not satisfied. We don’t have the complete truth."

A response group representing Canada, Ukraine, Afghanistan, Sweden and the United Kingdom delivered a "notice of claim" against Iran on June 3. It lays out expectations around financial compensation for victims' families, a formal apology, returning remains and property to loved ones and proof of measures taken to prevent similar tragedies down the line.

An Iranian reply, which has yet to come, would kick-start negotiations, Garneau said. If the regime does not "display good faith," Canada can turn to a dispute resolution mechanism at the International Civil Aviation Organization (ICAO), a United Nations agency based in Montreal.

"And if that is not satisfactory then we can go to the International Court of Justice," Garneau said. He declined to provide a timeline, saying it is "definitely not years."

The planned process comes as cold comfort to some.

Kourosh Doustshenas, whose 39-year-old fiancée Forough Khadem was among the victims, said he does not have "any faith" that Iran will offer genuine co-operation.

"It's really painful, it’s very frustrating," he said in a phone interview from his home in Winnipeg. "But I’m not sure what else the country can do against a rogue regime like that.

"My life has been a nightmare since Jan. 8, 2020, and there is not a day gone by that I have not been thinking about her," he said of his partner, an immunologist. "Especially in the horrible, horrible way in which she was killed, along with the other innocent people.”

Doustshenas said that regardless of whether the shoot-down was premeditated, the act and the deficiencies that led to it amount to "criminal negligence" in his eyes. He is calling on Canada to pressure ICAO to condemn Iran.

The Association of the Families of Flight PS752 Victims said it welcomes the report.

"That report exposes the Iranian regime's disregard for human life, failure to disclose the truth and pursue justice, and oppression of victims’ families," the association said in a release.

"The association welcomes Canada's commitment in the report to pursuing the truth and justice, including to the International Court of Justice, and calls for the international community to hold the Islamic Republic fully accountable for what it believes to be the wilful murder of their loved ones."

The association said the Iranian regime had an obligation to transparently disclose the causes of the downing of Flight PS752 through a comprehensive report in co-operation with the affected countries and has failed to meet that obligation.

Iran initially denied responsibility for the crash, but three days later said the Boeing 737-800 was shot down by accident after being mistaken for a missile amid heightened tensions with the United States. The admission came after video footage on social media appeared to show at least one missile striking the jet.

The disaster unfolded hours after Iran launched missiles into Iraq at two American military bases in retaliation for the U.S. having killed top Iranian general Qassem Soleimani near the Baghdad airport by order of then-U.S. president Donald Trump.

Emails from Garneau in the 48 hours following the shoot-down show his concern with the state of the flight data and voice recorders, colloquially referred to as the "black boxes."

The information they contain about what was happening on the airplane and what the pilots were discussing is considered key to aiding in any investigation, but early reports suggested they had been damaged and some data potentially lost.

“Either way, it’s concerning if true and during a crucial moment of flight,” Garneau wrote.

In an email late in the evening on Jan. 9, 2020, Garneau’s office was trying to figure out how to "contextualize" Canada’s role in the investigation: "Is it a full role, partial role, and are we satisfied with the extent of our participation?"

The Canadian Press obtained copies of the emails under the Access to Information Act.

Michael Bociurkiw, who was an observer for Ukraine's investigation into the downing of a Malaysia Airlines flight in 2014, said the skies are no safer since then, and that governments and institutions need to take stronger steps to protect airspace from military threats.

"It’s shameful that Canada and allies — and especially the Montreal-based ICAO — have achieved so little to make the skies safer for civilian passengers," he said in an email.

— With files from Jordan Press