About a dozen Soofa benches in downtown Newmarket and Riverwalk Commons have sensors that passively listen for Wi-Fi-enabled devices such as smartphones and tablets, allowing the town to gather information
Apr 8, 2019 1:54 PM By: Kim Champion 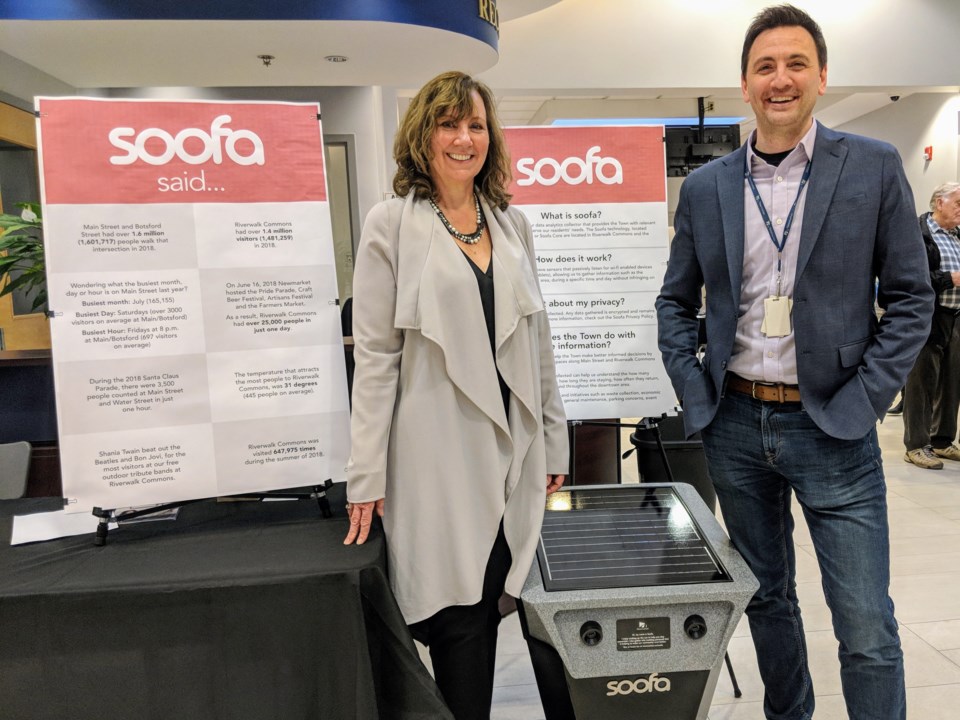 The Town of Newmarket's Susan Chase, director of innovation and strategic initiatives, and Mark Agnoletto, strategic business leader, development and infrastructure services, share information about the town's Soofa benches at the April 3 open house at the municipal offices. Kim Champion/NewmarketToday

Anytime you are in downtown Newmarket and in the vicinity of the built-in, solar-powered Soofa benches, your smartphone is providing data that is helping the town to know things such as the busiest month, day and time for visitors to Main Street.

Now with about a dozen smart benches, the town was the first in Canada in 2016 to roll out the technology that offers visitors a chance to charge their devices while taking a rest on a bench. Meanwhile, sensors within the unit passively listen for Wi-Fi-enabled devices and collect data that is encrypted and anonymous to protect an individual’s privacy.

“The Soofa benches blend right in to the benches beside it,” said Susan Chase, director of innovation and strategic initiatives, during the Town of Newmarket open house last week.

“The information received right now is informing our events. We know how many people are attending certain events downtown. For example, the data shows us that (tribute artist) Shania Twain got the most visitors over Bon Jovi and the Beatles at Riverwalk Commons.”

Chase also said the town has just started to build on a year of data and it can now plan for some of its general maintenance, capital investments and more.

“We know if we have to get garbage picked up a little more often or go out there and do some street cleanups,” she said, adding that July is the busiest month on Main Street, Saturdays attract more than 3,000 visitors to Main and Botsford streets, and 8 p.m. is the busiest hour with 697 visitors on average.

“We know for a fact that July is the busiest month. We figured it before, but now we have the data and we can make evidence-based decisions. We’re also starting to correlate the data with other data sets, such as the Weather Network, which shows us that the temperature that attracts the most people to Riverwalk Commons is 31C on average.”

The Soofa benches are a partnership between the Town, the Main Street District Business Improvement Area, and Buckley Insurance. The benches are environmentally friendly, and the data-driven technology helps the town to gather information that it says will improve the quality of life in the community.

As part of the Soofa Beta Cities network, Newmarket, along with New York, Boston, and Los Angeles, is a step closer to being recognized as a Smart City.

Other data collected includes how many people are visiting certain areas, how long they are staying, how often they return, and how people are moving around throughout the downtown area. The information assists projects and initiatives such as waste collection, economic development, parking concerns, event logistics, and more.