‘It’s frankly not acceptable that I can’t ask the integrity commissioner questions,’ said Newmarket Mayor John Taylor in regards to report that outlines a complaint by a constituent who was blocked on Twitter by Regional Councillor Carmine Perrelli
Apr 16, 2021 8:00 AM By: Jessica Owen 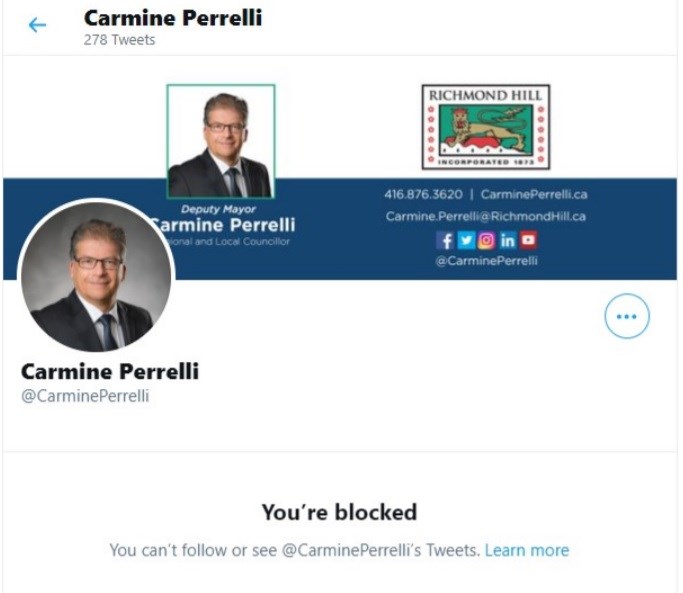 A screenshot of York Regional Councillor Carmine Perrelli's Twitter page from Jason Cherniak's account was submitted as part of a deputation by Cherniak to York Region councillors. Cherniak filed an integrity commissioner complaint against Perrelli alleging that by blocking him on Twitter, Perrelli violated the code of conduct.Contributed image

York Region council was handed its first ever integrity commissioner investigation report this week, which focused on whether or not it’s OK for an elected official to block a constituent on Twitter.

In the discussion — or lack of discussion — concerning the report that Newmarket Mayor John Taylor called “bizarre,” the councillor at the centre of the complaint spoke out, despite initially declaring a conflict and attempting to defer questions or comments on the report by insisting he had the right to have his lawyer present.

Cherniak alleged that Perrelli inappropriately blocked him on Twitter because he was critical of the regional councillor’s position opposing the province’s COVID-19 lockdown measures in York Region.

“Councillor Perrelli’s actions have limited my ability to remain an engaged member of the York Region community. While there are many pressing matters for this council, public engagement and democratic process remain integral and I ask you to please ensure that this breach ends,” said Jason Cherniak in a deputation council.

On Jan. 7, Councillor Perrelli posted a CP-24 headline on his Twitter account regarding his intention to bring a motion to the York Region committee of the whole meeting on Jan. 14 requesting that the provincial government not extend the grey lockdown zone to York Region.

Follow the safety protocols but leave our businesses open! pic.twitter.com/iEFtleUA9t

The complainant alleged that within 24 hours of him posting the retweet, Perrelli blocked Cherniak from viewing his Twitter page.

“We conclude that while the arbitrary blocking of criticism on an open Twitter account hosted by a member of council, through which the business of council is discussed with constituents, is contrary to the Code of Conduct, the code provides little guidance in that respect and so in the circumstances of this matter, no sanction is being recommended,” wrote Jeffrey Abrams and Janice Atwood-Petkovski, co-principals of Principles Integrity in their report to council.

“Accordingly, we recommend that council...develop a policy framework for when and how members of regional council may block constituents from their social media accounts, including Twitter.”

Taylor had asked the commissioners for guidance on whether Perrelli would continue to be in breach of the code of conduct until he unblocked Cherniak.

“Right now, this would be an ongoing situation,” said Taylor. “I would like to ask our integrity commissioner on how council could address this situation.”

However, before Abrams could respond, Perrelli interrupted to call a point of order.

“Mr. Chairman. This is not the proper protocol for...a code of conduct complaint. The proper protocol is for a complaint to be filed, an investigation be made and a report to be filed to this council,” said Perrelli. “Right now, I’m being grossly disadvantaged by this process going forward. I do not have the benefit of having my attorney present to contradict any statements made by Mr. Abrams or Miss Atwood.”

“This is highly irregular and highly prejudicial. I strongly urge you not to allow this. This is totally inappropriate,” he said. “My rights as an individual are being violated by these questions. I caution you, Mr. Chairman.”

York Region Chairman Wayne Emmerson said Perrelli had every right to have his lawyer present.

“Mayor Taylor, if you still want this proceeded, then we’ll have to come back at another time when Councillor Perrelli has his lawyer in place,” said Emmerson.

Taylor said he didn’t know enough about what Perrelli was asserting.

“If Councillor Perrelli is not prepared to allow us to ask a couple of questions and try to clarify and understand this, then I guess we have to defer it,” said Taylor. “In any format I’ve ever seen, council is allowed to ask the integrity commissioner questions. We’re allowed to move a motion to sanction. Did someone tell him he couldn’t have (legal representation)?”

“No, he wasn’t,” responded Emmerson.

“Then, how does that limit us? I would like to hear from our legal counsel on the point of order,” said Taylor. “It sounds like the problem here is me asking a question.”

“At this point, all that is before this council is the report of the integrity commissioner. It does not seek any sanctions and puts forward a recommendation that this council adopt a policy with respect to social media use. I’m a little bit at a loss as to why this council would not be able to discuss or deal with this matter on those issues,” he said. “Discussion and questions with respect to that issue could properly ensue.”

Taylor said he had gone into the discussion with the intention of voting in favour of receiving and supporting a code of conduct update, but the tone of the discussion had given him pause.

“If the position of Councillor Perrelli is that I’m not allowed, nor is any other member, to ask a question of our integrity commissioner in the process, then I can’t support that. I would support your direction to defer it for a month,” he said. “In my opinion, it’s frankly not acceptable that I can’t ask the integrity commissioner questions.”

“I would be really distraught and disappointed if we voted to move forward on (this)... If that’s the case, then voting on the matter would be frankly, bizarre,” said Taylor. “I’m at a loss for words. I’m being put in the position of being the bad guy.”

When Perrelli spoke concerning the matter, he said he felt any member of council could have asked the integrity commissioner questions in advance of the meeting, but not during the meeting.

“This is going to prejudice me even further, it’s going to cost me $10,000 to have my lawyer here on standby for the day. This is an attempt to cause me more financial burden,” he said. “If it is the intention of this council to not deal with this today and have another session in the future where I am forced to bring a lawyer, then I ask that this council indemnify me and pick up the cost of that attorney as the complainant has had the luxury of having the integrity commissioner being paid for by the residents of York Region. I think I should be afforded that same opportunity.”

Perrelli said he and his lawyer’s point of view were not included in the integrity commissioners report.

“All this council has heard today is what the complainant has said and the report of the integrity commissioner. My lawyer’s comments, which I paid $6,000 for, were not included in the report. This council does not have the benefit of hearing my lawyer’s response,” said Perrelli. “I don’t believe the integrity commissioner made the proper ruling. I believe, in the absence of a policy, the commissioner should have dismissed it with the recommendation that we come up with a policy.”

“To save the residents of York Region money, I would allow all questions to the integrity commissioner, save the fact that if it starts to look like a trial, that we please stop it,” said Perrelli.

“So many things have been stated by Councillor Perelli. He stated that questions are not allowed to be asked because that’s how they do it in Richmond Hill. Now, he’s saying, we can ask questions but he gets to decide if they’re over the line or not? This is controlling the process, and that’s not the person who should be controlling the process,” said Taylor. “Are we now asking all questions, period, and Councillor Perrelli doesn’t get to stop it halfway through and say now I want to defer it and go to a lawyer?”

“I’m the one with the floor,” Taylor shot back. “There are actions being taken that make me feel like I’m causing the problems, the delay or the $10,000, when all I want to do is ask our integrity commissioner a question. If he doesn’t want to cost $10,000 or defer to another way, the simplest way to do that is to frankly commit to unblocking this person.”

Perrelli then said to just ask the question.

“You just said you want your lawyer,” said Taylor, visibly frustrated with the exchange. However, Taylor proceeded to ask the integrity commissioners if Perrelli continued to block the constituent for weeks or months, if he would still be in continued breach of the code of conduct.

“This kind of behaviour is concerning and we believe it to not be in compliance with the code. At the same time, we’re saying codes should be guides,” said Abrams. “To answer your question specifically, no. This is an issue that’s emerging and councillors are deserving of some guidance.”

Taylor asked if a public workshop could also be included as part of staff coming up with a new policy framework that includes a social media policy, as he said he thought the public should be involved in the formation of such a policy.

Councillors voted to receive the integrity commissioners report with no sanction be imposed, and that staff compile a social media policy as part of the code of conduct after public consultation through a workshop.

In the United States, courts have already ruled that a public official who blocks a constituent from their Twitter feed has violated the First Amendment’s protection of freedom of speech.

A similar challenge has not yet been contemplated by Canadian courts, so in the meantime, politicians and municipalities are left to come up with their own policies.

In 2018, Ottawa Mayor Jim Watson came under fire when three Ottawa residents launched a court case against him, arguing that he violated the Charter of Rights and Freedoms when he blocked them on Twitter. The case was settled out of court, with Watson agreeing to unblock everyone.