A 26-year-old suspect of no fixed address has been charged after more than 25 vehicles were damaged in the middle of the night
May 22, 2019 5:57 PM By: Kim Champion 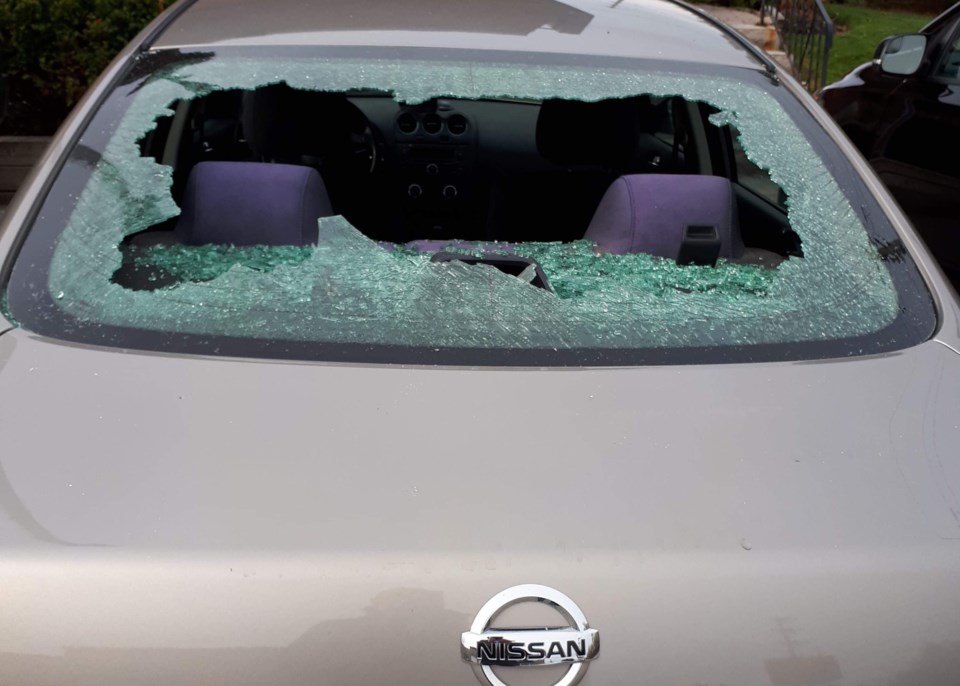 A longtime Leslie Valley Drive resident had two of the family's vehicles damaged, including the rear window and brake lights smashed. Supplied photo

Residents of the usually sleepy Leslie Valley Drive in Newmarket’s Huron Heights neighbourhood were awakened in the middle of the night May 21 by York Regional Police who were canvassing door-to-door after receiving a weapons call.

What York police found when they arrived in the area of Leslie Valley and Traviss Drive about 2:20 a.m. was more than 25 vehicles with the windows smashed out, police said.

York police searched the area and heard sounds that led them to the suspect, who was in possession of a hammer, York police Const. Laura Nicolle said.

The suspect fled from police still armed with a hammer, but police followed him and arrested him, she said.

More than 25 vehicles were damaged and York police are continuing to canvass the area for additional victims of the vandalism spree.

Leslie Valley Drive resident Dianne Wood received a call from her husband about 3:15 a.m. Wednesday morning, notifiying her what had happened and that police had knocked on their door during the investigation.

Wood, who is visiting family out of town, said two of the family’s vehicles that were parked in the driveway were damaged, along with many of her neighbour’s vehicles on the lower north side of the street.

“I’ve never seen anything like this in Newmarket,” said Wood, a longtime resident who received text messages most of the day from neighbours checking in to make sure everyone was OK. “Nothing like this ever happens in Newmarket, and a lot of people had their regular schedules altered today.”

A 26-year-old man of no fixed address has been charged with possession of a weapon and mischief over $5,000.

Wood said she has already received a copy of the police report and has forwarded it to her insurance company.

York Region first in Canada to receive Esri President’s Award
Jul 13, 2020 5:00 PM
Comments
We welcome your feedback and encourage you to share your thoughts. We ask that you be respectful of others and their points of view, refrain from personal attacks and stay on topic. To learn about our commenting policies and how we moderate, please read our Community Guidelines.