Work begins on Aurora side of new subdivision, while Newmarket considers environmental impact

Stream restoration is to begin within the next couple of weeks for the large-scale Shining Hill Estate project that spans the two communities
Feb 22, 2021 1:18 PM By: Alan S. Hale 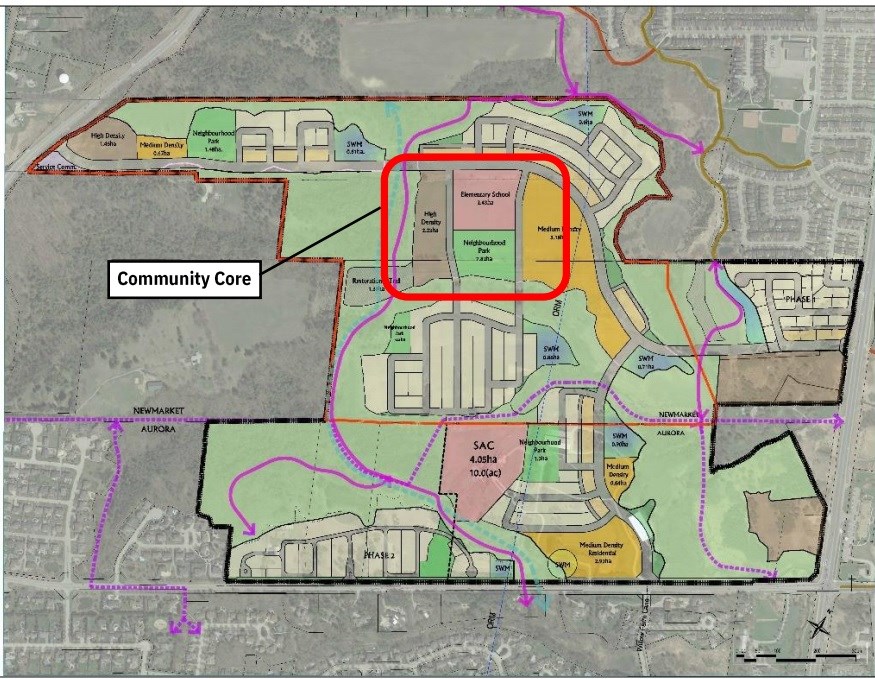 A map of the Shining Hill Estates project including the portion located in Newmarket and Aurora (below the purple dotted line). Supplied photo/Town of Newmarket

Work on the Shining Hill Estate subdivision development that straddles the border of Aurora and Newmarket will begin shortly in Aurora, while the project faces fierce opposition in Newmarket from environmentalists and other concerned residents.

On Friday, the Town of Aurora advised residents on the border of Newmarket and Aurora that work on the portion of the new subdivision that is located in Aurora near St. John's Sideroad and Yonge Street will be getting underway.

"Starting in the next couple of weeks, work will begin with the restoration of a stream running through the property, creating new and extensive habitats for flora and fauna in the area," said the town in the statement.

The plan for the subdivision spanning Newmarket and Aurora includes many different kinds of housing, new school areas, parks and greenspace, and commercial areas.

But the controversy that surrounds the Shining Hill project is that the land it plans to build on in phase 2 is part of the Oak Ridges Moraine.

The moraine is a large and environmentally sensitive area created by the last ice age. Newmarket has banned development since 2003 when the municipality declared it an environmentally protected area. Consequently, the moraine lands are one of the only undeveloped areas left within Newmarket's boundaries.

Aurora, on the other hand, has not banned development on the moraine lands, and neither has York Region or the Province of Ontario. All three government levels allow development to go ahead, provided some steps are taken to protect the environment there.

In its statement, the Town of Aurora said that such steps are being taken.

"The local conservation authority has now approved restoration plans for the stream, which had been previously converted into man-made ponds," reads the statement.

"While the work will require the removal of several trees in the area, the restoration efforts will enhance the flora and fauna, provide the perfect habitat for a wide variety of wildlife species and will remove a barrier to fish habitat."

A meander belt and wetland are planned to provide space for fish to spawn and create a habitat for amphibians and turtles. That work is set to begin by the end of the month while water levels remain lower and the ground is firmer.

"Restoration will require the removal of several trees in the area. It is expected that the restoration work will conclude in April."

While Aurora approved the Shining Hill Estates project and passed the necessary zoning amendments to allow it to proceed in June 2020, the Town of Newmarket is still deciding if it will do the same.

But doing so would require rescinding, at least in part, the environmental protections that were placed on the moraine almost two decades ago. Such a move is opposed by some Newmarket residents, dozens of whom wrote into council and spoke against the project at a public hearing last month.

UPDATE: Newmarket Mayor John Taylor said its important to keep in mind that there are four levels of designation over the moraine lands inside Newmarket.

"One of those is “settlement lands” and the Oak Ridges Moraine Act allows development on only those lands. The rest of the Moraine can not be developed. Period. The land in question is Settlement Lands and Newmarket placed a higher level of protection about 20 years ago. The decision now is whether or not there is a rationale for changing the Newmarket designation," the mayor said.

Developer 'has their work cut out for them:' Newmarket citizens argue persuasively to protect moraine
Jan 18, 2021 8:09 PM
Comments