'When you look out the window, you don’t see climate change, you see weather… It’s experiential, it’s real, it’s something you make decisions on every day,' says Environment Canada's Dave Phillips
Sep 12, 2019 4:30 PM By: Miriam King 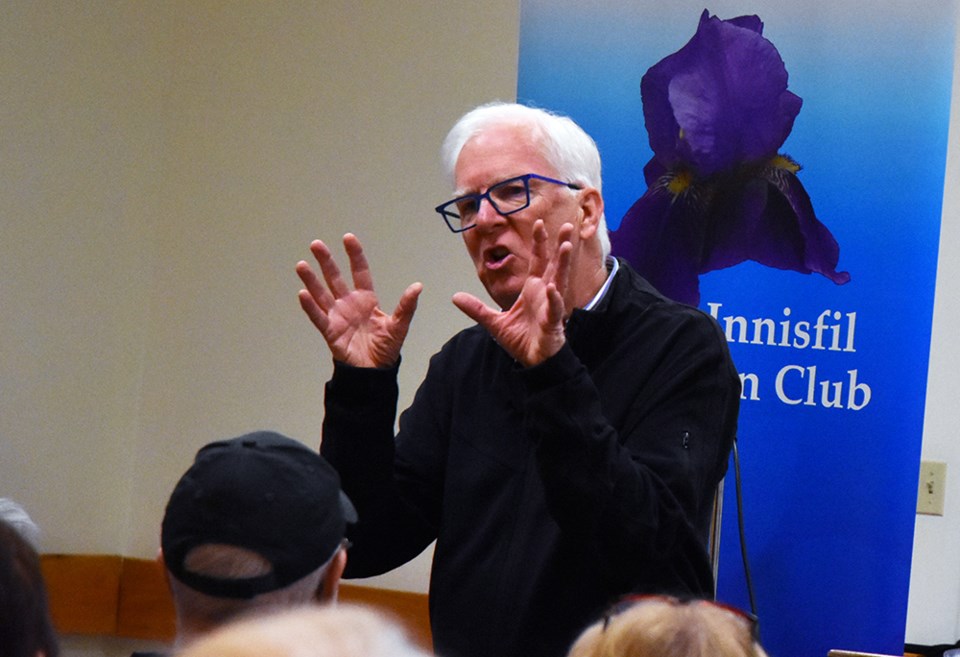 Climate change tends to be... academic. It’s hard for people to grasp the importance of a 1.3 C increase in average global temperature, over the years from 1948 to 2017.

Ahh, but when climate change begins to impact the weather, it’s a different story.

“As soon as climate change began to hit our homes, it hit home,” said Dave Phillips, senior climatologist with Environment Canada. “It’s not just about averages, it’s about extremes in weather.”

Phillips was guest speaker at the Innisfil Garden Club, talking about “Canadians’ favourite topic of conversation: the weather.”

Armed with a collection of 35,000 weather stories, and weather trivia — did you know men are hit by lightning four times more frequently than women? —  Phillips presented an overview that was as entertaining as it was alarming.

He noted that until recently, Canada has been relatively free of the weather disasters that have been seen around the world, even though “we are the flashpoint between cold air to the north, and warm air to the south” —  the ingredients for wild weather.

“We are the second most tornado-prone country in the world,” Phillips noted, with approximately 3 million lightning strikes recorded annually, and temperatures that range from -50 C to 40 C.

But climate change is having an impact. By mid-century, said Phillips, “We will inherit the weather of 600 kilometres to the south of us” –— weather that is the most severe on the continent.

“What is changing is not just the climate, it’s the weather,” he said. “When you look out the window, you don’t see climate change, you see weather… It’s experiential, it’s real, it’s something you make decisions on every day.”

The ice storm of 1998, the flooding in Toronto in 2013, the Fort McMurray wildfires  —  “We are not prepared for the weather we have,” Phillips said.

“We used to think we were immune. We thought that 100-year storms occurred every 100 years. There were few surprises…. Now, what we see is all these extremes and variations.”

The Saguenay flood in Quebec, in 1996, was Canada’s “first billion-dollar disaster,” but not its last, Phillips noted.

In 2012, Ontario experienced a March that broke all the records —  with nine days of temperatures that ranged from 16 to 27 C. “Then what followed that heat wave was 19 days of killing frost,” said Phillips. “It was just awful for agriculture and gardeners.”

2013 not only saw disastrous and “surprising” flooding in Muskoka, it saw an ordinary thunderstorm dump an extraordinary amount of rain on the city of Toronto — 126 mm in just 2 hours, “more than Hurricane Hazel dumped in one day,” said Phillips.

“It was Toronto’s most expensive disaster,” he said causing $1 billion in damage in just two hours.

“What we have seen is that more records are being broken,” said Phillips. “The costs are hugely significant,” with insurance companies now paying out “more for weather and water than fire and theft.”

It’s not 'new' weather. “What we’re seeing is the same old weather, but what’s different is the statistics,” he said —  a change in the frequency and severity of events, and an increase in unpredictability.

That increase has been made all the more impactful by our own behaviour, Phillips said. Human beings have built mega dams and reservoirs, drained wetlands, built in floodplains and coastal areas prone to flooding, and paved over natural areas.

Eighty-five percent of Canadians live in communities of more than 10,000 people, he said, and urbanization has changed the ability of the landscape to cope with rainfall and flooding.

In a grassy area, it takes eight hours for rainfall to percolate through to the groundwater; in a parking lot, the water isn’t absorbed but runs off within eight minutes, contributing to flooding.

“Flooding is an 'act of God', but floods and flood disasters are an act of humankind,” Phillips said.

The higher rainfall is a function of higher temperatures, Phillips explained: for every 1 C increase in temperature, the atmosphere can hold eight per cent more moisture. “This is the kind of fuel that drives extreme weather,” he said.

And the higher temperatures, globally, can be traced to rising levels of carbon dioxide and other greenhouse gases in the atmosphere.  “The evidence is irrefutable. The world is warming up faster and warmer now, and our fingerprints are all over it,” Phillips said.

So, what is his forecast for the future? “Warmer. Wetter. Wilder,” said Phillips, noting that gardeners in particular will “live and experience the changes,” both new threats and new opportunities.

The changing climate will bring less snow cover in winter —  damaging plants that rely on the snow for protection. Gardeners and farmers can expect to see a longer growing season, that will favour crops and plants that until now couldn’t survive or thrive in Canada — but also longer and more frequent droughts that could devastate Western grain yields, higher temperatures, more insect and disease pests, more invasive species.

Milder winters have allowed the deer tick to spread and overwinter, posing a serious threat of Lyme disease.

Migrating birds may miss the insect hatches that provided foods; pollinators, the blooms.

“It really is a package deal,” said Phillips. “You can’t take the warmth, without the other aspects… This is a fundamental change to our climate. What doesn’t occur any more is ‘normal’, and what are all our policies based on? Normal weather.”

He called not only for mitigation of climate change, by weaning society off fossil fuels — “We certainly can’t keep burning them at the rate we do,” he said —  but also by adapting to the changing conditions.

Even with greater emphasis on renewable energy, the global warming trend is likely to continue for decades, he said; the best people can do is “prepare for it."

That includes preventing construction in flood-prone areas, rebuilding wetlands to cushion the impact of flooding, redesigning infrastructure that was built to handle “normal” conditions, and helping people “live better with the climate we’ve got, and the climate we’re going to get.”

Gardeners can lead the way, by encouraging and developing green space, rain gardens, and planting more trees to increase the shade canopy, he said, noting that backyard gardens make up 50 percent of green space in urban settings.

Climate change is impacting the weather, Phillips concluded. “This year, they had thunder and lightning at the north pole,” he said.

“If we called it ‘atmospheric terrorism,’ we’d have it nailed.”

Southlake's 5K virtual run raises $316K
Oct 22, 2020 8:00 AM
Comments
We welcome your feedback and encourage you to share your thoughts. We ask that you be respectful of others and their points of view, refrain from personal attacks and stay on topic. To learn about our commenting policies and how we moderate, please read our Community Guidelines.