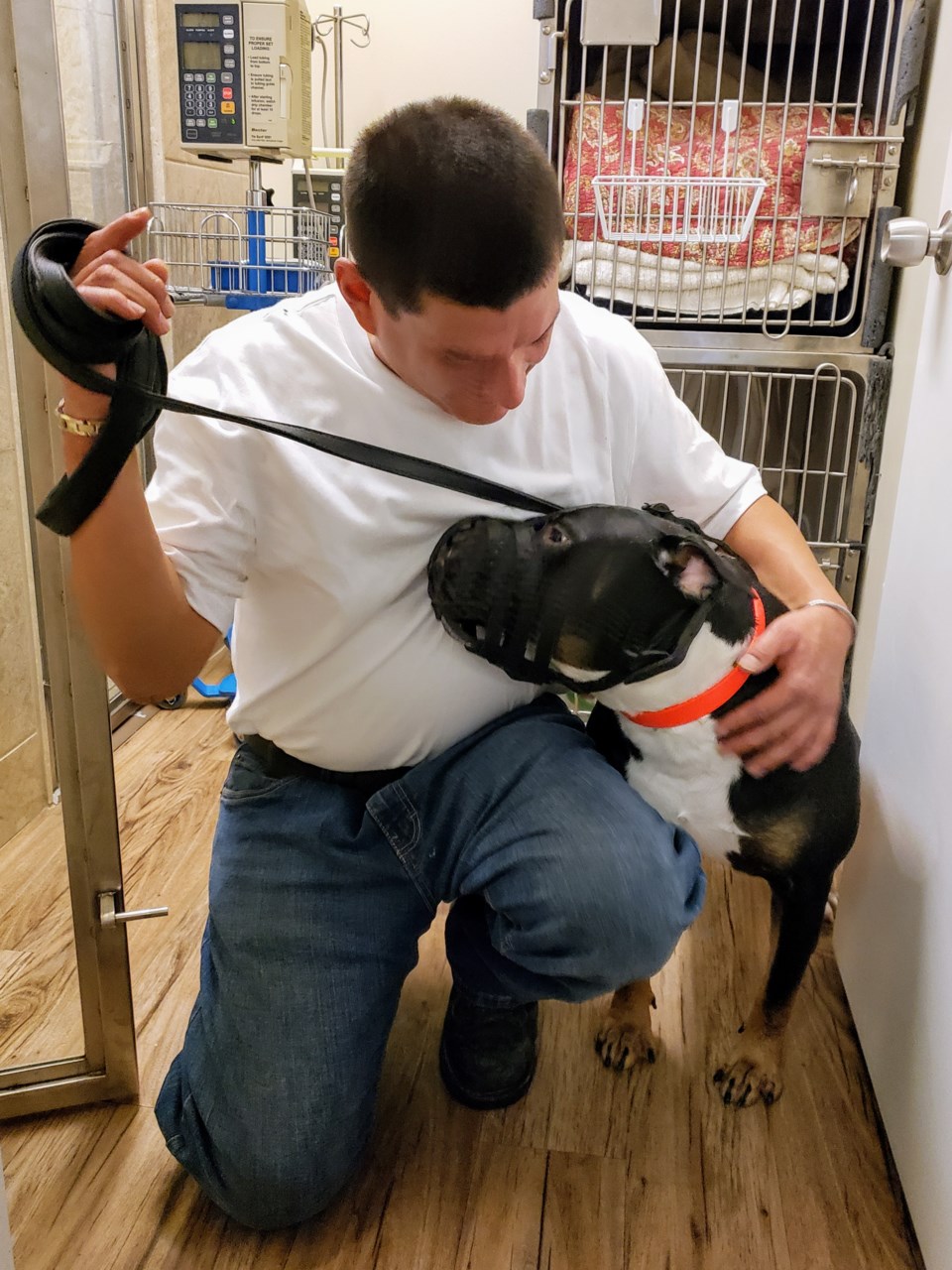 The community rallied around former homeless man Cory Chartrand and donated more than $7,100 to help him pay the year-long animal boarding costs, and more, to get his dog Pipper home for Christmas. Supplied photo/Brian Morris

After more than one year apart, a former homeless man and his cherished dog had a tail-wagging reunion yesterday, thanks to the shower of support from the Newmarket community and beyond.

Cory Chartrand, who is now employed and living in his own York Region apartment, arrived at the Georgina Animal Shelter bright and early Wednesday morning to meet paralegal Brian Morris, whose pro bono services in court saved the muscular, mix-breed dog Pipper from being destroyed.

The community rallied around helping Chartrand bring his best friend home, and donated more than $7,100 to a GoFundMe campaign that largely paid for animal boarding fees during the time Pipper (pronounced pai-pr) was quarantined.

“Everything was a great success, and Cory was quite excited to be there,” said Morris, who took on Chartrand’s case in fall 2018 after Pipper was seized by local bylaw officers and quarantined for biting a passerby on the street.

That person suffered a bite to their arm and made a full recovery, Morris said, adding that thankfully, the injury wasn’t life-threatening.

A prosecutor at Newmarket’s courthouse sought a destruction order against the dog, and when Morris learned about Chartrand’s plight through local homeless shelter, Inn from the Cold, he jumped on board.

“Cory didn’t have the resources at the time to look after the dog but he does now, and I think destruction should be the last resort,” said Morris. “The court struck a really good balance, as far as putting strict but fair conditions on this dog to ensure this wouldn’t happen again. The onus now lays on Cory to ensure he follows the conditions, and if he does, there should not be a problem.”

Those conditions include full payment of housing fees to the Georgina Animal Shelter in the amount of $6,180, Pipper must be muzzled when in public, neutered, and microchipped, and Chartrand must secure obedience training for Pipper within 12 months of release.

Veterinarian Dr. Angela Smith, of the East Gwillimbury Veterinary Hospital in Mount Albert, was called to the Georgina animal hospital yesterday when staff there were having some trouble sedating Pipper with oral drugs for surgery.

The dog was scheduled to be neutered and microchipped before being released, in accordance with the court’s conditions.

Dr. Smith and her team sedated the dog and transported him back to their clinic, where she performed the surgery.

“Honestly, in almost 19 years, yesterday was my best and most favourite day ever of being a veterinarian,” Dr. Smith said. “It was just awesome seeing the two of them reunite. It’s just incredible and so heartwarming.”

The local veterinarian said she thanked Chartrand for trusting her to do the surgery.

“Trust is a very difficult thing for this population cohort, so the fact that he trusted me to do the surgery and help him out with Pipper is an honour, really,” she said. “Pipper is his family and his companion, and it means everything to him. Without Pipper, that’s where one’s health really does suffer, so having him back with Cory is so positive and uplifting.”

“Even through the grogginess of the anesthetic, I could see the dog just looking at Cory and his tail just started to do this little wag, and when Cory was patting him, the dog kept licking him through the muzzle. He knew who he was immediately after 446 days apart.”

Dr. Smith also runs the Community Veterinary Outreach of York Region, which for the past two years has provided free veterinary care to pets whose owners are experiencing homelessness.

Due to the demand for the service at homeless shelters, a third clinic will be added in 2020.

“It’s growing and growing and we have a waiting list every time now, and we’re just so happy to be able to help the people that need us with their pets,” she said.

Morris is grateful to everyone who contributed to the reunion, including community members who donated funds, Dr. Smith and her team, and staff at the Georgina Animal Shelter.