Agatha Vanek's comments on Twitter in response to news stories involving men injured or killed in Toronto shooting incidents are being investigated by the Regional Municipality of York
Feb 10, 2021 1:04 PM By: Alan S. Hale 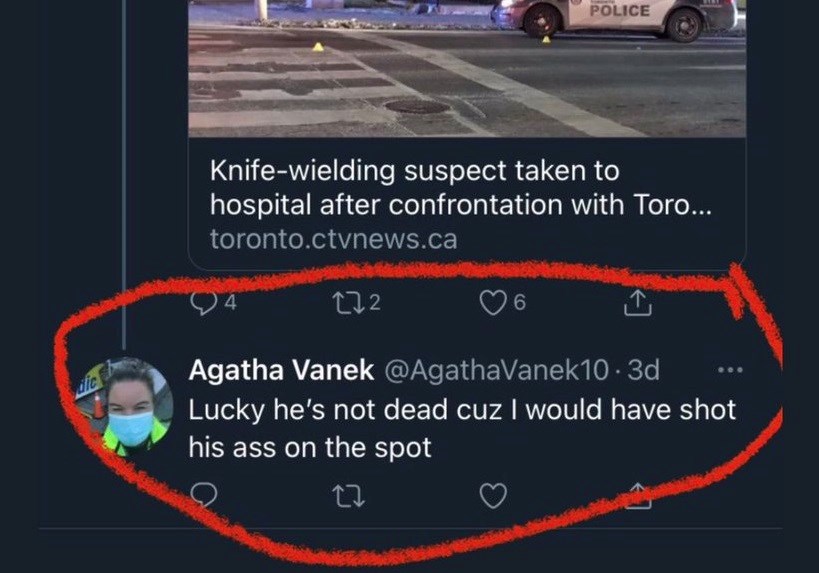 The now deleted Twitter account, which identified the user as York Region Paramedic Services employee @AgathaVanek, who was suspended this week.Supplied photo/Twitter

Editor's Note: The headline of this article has been altered and a sentence added to clarify information that initially was not provided in response to a question from NewmarketToday to CUPE Local 905.

The union representing York Region's paramedics isn't coming to the defence of a member suspended during an investigation of offensive comments posted on social media.

The paramedic, posting on Twitter under the name Agatha Vanek, has been suspended with pay by York Region and her social media accounts have been deleted. When asked if the union would be defending Vanek, the president of CUPE Local 905, Katherine Grzejszczak, said, "CUPE 905 unequivocally denounces all forms of racism, anti-Black racism and discrimination.

"We cannot stress enough that we know the violent impacts racism and oppression has on marginalized communities."

Grzejszczak clarified that the union will represent Vanek "as we would any other member who is under investigation by the employer."

York Region has stated that while it supports individual perspectives, it will not tolerate comments that do not promote "diversity, inclusivity and compassion."

"The Regional Municipality of York is aware of statements and comments made by one of our employees on their personal social media account while identifying as a York Region employee," said Patrick Casey, director of corporate communications.

"All York Region employees must perform their duties in a manner that maintains and enhances public confidence and trust through professionalism, integrity, objectivity and impartiality," he said. "The region’s employees are our ambassadors and are expected to reflect professionalism at all times, including the use of social media."

The employee is subject to disciplinary action up to and including dismissal, Casey added.

Last week, comments were posted on the Vanek Twitter account, which identified the user as a York Region paramedic, in response to news stories about men who had been killed or injured in two separate shooting incidents in Toronto, to which some other users reacted with outrage and dismay.

The first story was about a man who had been injured by Toronto Police after he was stopped for allegedly damaging cars. Police say he produced a knife, and they shot him three times with a stun gun and once with a bean bag round fired from a shotgun. He was taken to the hospital and was in stable condition.

Three days later, she posted about the death of Hasim Omar Hashi, who was gunned down by unknown assailants outside his apartment. Although it is not believed Hashi was involved in any gang activity, police suspect his death was gang-related, possibly a case of mistaken identity.

A spokesman for his family lamented his death on Twitter, saying Hashi had a "beautiful soul," to which Vanek commented: "Everyone has a beautiful soul!!!! Sorry about his death, but take a look at who shot him. Just saying."

On Sunday, York Region Paramedic Services issued a statement on Twitter that Vanek had been suspended with pay for not complying with York Region's code of conduct and other rules regarding professionalism for employees.

"York Region Paramedic Services values and embraces a community where everyone lives with respect, dignity and (is) free from discrimination. While we support individual perspectives, comments that don't promote diversity, inclusion and compassion aren't tolerated."

Some Twitter users posted that the paramedic should be fired because she had lost public trust.

"We can't trust this paramedic to treat all patients without bias or prejudice. She needs to be let go," said one user with the handle deep_t_freeze.

Not everyone felt the same way, however, with some users arguing the reaction to her comments is unfair.

"I guess if you work for York Regional Paramedics, your freedom of speech and expression goes right out the window," said a Twitter user called Roy.