Tree removal continues in Newmarket as worksites are prepared for the forcemain twinning project
Jul 8, 2019 10:45 AM By: Debora Kelly 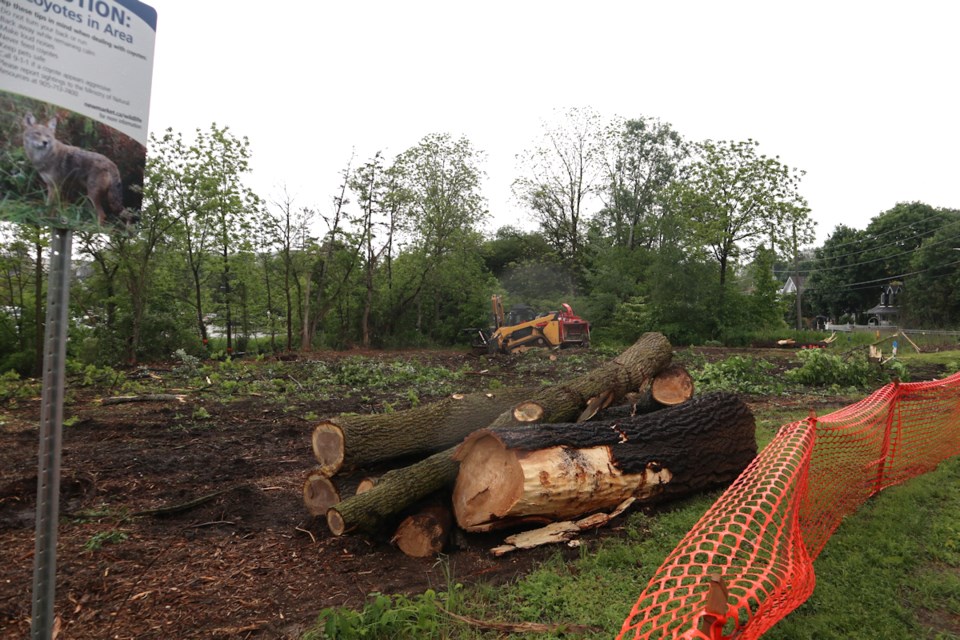 As preparation for the forcemain twinning project that will improve the wastewater system in Newmarket continues, 13 trees will be removed at Madsen’s Greenhouse on Bayview Parkway beginning today, according to the Region of York.

When the project is completed, 63 trees and 150 shrubs that are native to the Newmarket area will be planted at the Madsen's Greenhouse worksite, including sugar maple, white fir and red osier dogwood shrub.

The $110.6-million York-Durham sewage system forcemain twinning project, as it's known, will see a second pressurized sewage pipe installed alongside the town’s existing forcemain. The work is expected to be completed in fall 2021.

See where the news is happening on the NewmarketToday News Map

The remaining trees in the area and along the Tom Taylor Trail on Bayview Parkway will be fenced, protected and monitored throughout the project, according to the Region.

The tree cutting for the forcemain twinning project began at the Queen and Charles streets worksite with the removal of 34 mature poplars, to the dismay of many area residents.

“The neighbours are in shock,” Diane Ogrodnik told NewmarketToday. “You can imagine how shocked everyone was when they woke up, looked across the street and now see a parking lot and the crematorium.”

The trees were removed to prevent possible impacts with the microtunnelling machine and to accommodate the shaft installation, according to the Region.

When the forcemain work is completed, the Queen/Charles woodlot will be restored and 79 replacement trees and 20 shrubs will be planted, Region spokesperson Masrine Guthrie-Peart said.

The replacement trees will be six to eight-feet high and native to the area. Ten different species of trees will be replanted, including sugar maple and basswood trees, she said.

The new plantings come with a guarantee, Guthrie-Peart added, so if there’s especially harsh weather, any that don’t make it will be replaced.

Residents are being notified through a notice of construction and signage. As well, the Region held several open houses on the project.

During the planning phase of the forcemain twinning project, the project team, Lake Simcoe Region Conservation Authority, Town of Newmarket and forestry experts carefully evaluated the local waterways, woodlots,  trees and shrubs at each worksite. Trees that can be transplanted are moved to new locations.

If you have questions, comments or wish to sign up for project updates, call 1-800-667-4817 or email accessyork@york.ca and visit york.ca/forcemaintwinning for further details.

Clear-cutting of 34 poplars shock neighbours in central Newmarket
Jun 18, 2019 3:45 PM
Comments
We welcome your feedback and encourage you to share your thoughts. We ask that you be respectful of others and their points of view, refrain from personal attacks and stay on topic. To learn about our commenting policies and how we moderate, please read our Community Guidelines.