Thousands of Christmas cards en route to Canadian soldiers, thanks to community efforts

Nearly 6,500 Christmas and holiday cards, carefully inscribed and filled in by members of the public from the Greater Toronto Area and beyond are making their way to soldiers in Goma, Bahrain, Qatar, Jordan, Iraq, Lebanon, Kuwait – and even Japan
Dec 24, 2020 1:45 PM By: Brock Weir, Local Journalism Initiative reporter 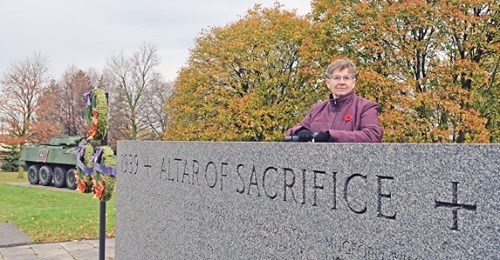 Dianne Harrison organizes the local campaign each year to send Christmas cards and messages of support to our military around the world. Facebook photo

Dianne Harrison spends this time of year filling her car with precious cargo.

They are often festively decorated with colourful wrapping paper. Some bear hand-written labels. Most sport patriotic Canadian flags for that all-important finishing touch.

Each box is taped, secured, and taken to the local post office bound for all corners of the world.

This year, however, presented some challenges but, despite some initial doubts, she knew she could make it work somehow – and thanks to the community, she made it work and then some.

Nearly 6,500 Christmas and holiday cards, carefully inscribed and filled in by members of the public from the Greater Toronto Area and beyond are making their way to Canadian soldiers stationed around the world.

Soldiers in Goma, Bahrain, Qatar, Jordan, Iraq, Lebanon, Kuwait – and even Japan – will soon receive messages of love and gratitude from citizens here at home.

“This year was absolutely phenomenal and heartwarming,” says Harrison. “The Optimist Club was wonderful, they took 1,500 cards, and we thought if they got those 1,500 cards done for us and we got another 500, it would be great to send 2,000. Our original goal was 4,500 and lo and behold, when we finished, we got 6,479 cards!

“We have been able to send to 31 bases around the world this year and we have never been able to do that before. We were also able to send cards to Sunnybrook Hospital, which we did because kids wrote letters to veterans and talked about the war.”

Helping the Cards for Soldiers initiative toward their goal this year was the donation of a whopping 10,000 Christmas cards which organizers were then able to distribute to individuals, organizations, companies and schools. As these 10,000 cards came without envelopes, Aurora-based business Prime Data and owner Steve Falk stepped up with an equal number of envelopes that fit the cards perfectly.

From there, the cards made the rounds before winding back with Harrison and her husband, Brian.

Friends in Calgary, for instance, completed 250 messages, as did letter-writers in Victoria and Nanaimo, British Columbia. Those are above and beyond the 6,479 that were mailed from Aurora.

Children learning from home also got in on the action, contributing 675 cards to the overall total.

“Most of the schools put all their return addresses and emails on the cards, so we’re hoping that people do hear back from the soldiers, but if they don’t, that’s okay,” says Ms. Harrison. “One thing with the year being so uneasy for people, I think people who are sending the cards are as truly blessed as the people receiving them. It has been an uncertain year and I think they just want our military to know that we care about them. Next year, we’ve got all people lined up wanting to be a part of this and we want to hit 7,000.”

One way to do that, she says, is setting aside any leftover blank Christmas cards you might have once the holidays are over and consider donating them to the cause.

“We live in a great community and it is the community that made it happen,” says Harrison. “I hope [the soldiers who receive the cards] realize we really care for them. It’s not just at Christmastime that we care and respect them, we know how much they are giving up for their families, but their families too are giving up so much for our country. We want them to know that we care, that we respect them, wish them well, and hope they are home safely very soon.”

Brock Weir is a Local Journalism Initiative reporter for The Auroran