They're No. 1 when it comes to manufacturing Canadian pride 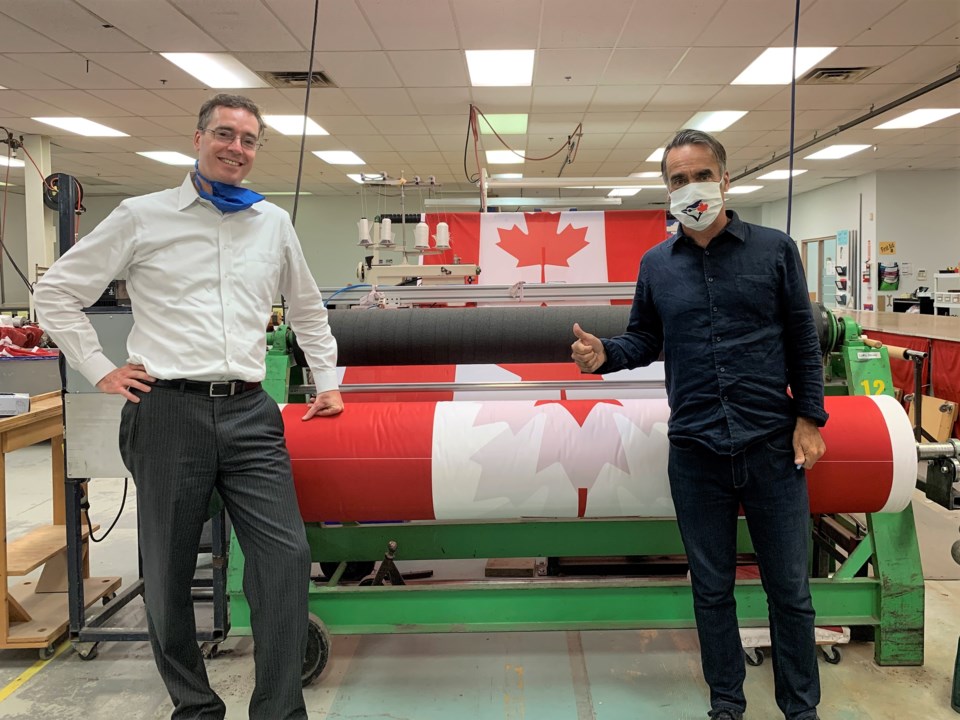 Brian Naish and Matt Skipp are the co-owners and co-presidents of Flags Unlimited, Canada's No. 1 manufacturer of flags. Contributed image

When unfurling your Canada flag today, check the label.

If it was made in Canada, it’s very likely it was manufactured in Barrie.

Flags Unlimited, located on St. Vincent Street, is Canada’s No. 1 flag manufacturer and accounts for about 60 per cent of the flag business nationally.

The local business was started in 1965, around the same time the Canadian flag was first adopted as a national symbol in February 1965.

Matt Skipp, co-owner and co-president of Flags Unlimited, bought the company in 2019 with his business partner, Brian Naish, from previous president Dennis Brown, who had owned the business since 2004.

After buying the business, the duo also added about 10 more jobs at the Barrie facility to keep up with demand, and a team-style approach was implemented.

“Not a lot has changed. We love the business. How can you not like a product that is never going to go out of style?” Skipp said. “Protecting our well-earned identity as ‘Canada’s flag-maker’ — that’s the first thing that Brian and I came to realize, that we must protect that brand.”

Currently, the business employs 44 people and sells more than 100,000 flags per year.

The company distributes their flags through major retailers such as Canadian Tire and Home Hardware.

Skipp says the business is regularly challenged by the global marketplace, where items can be made faster and cheaper abroad.

“It’s really important for us to be a Canadian producer of flags. We have to compete on price and quality,” he said. “But, that’s why we really like the potential for growth on the custom side of the business.”

Skipp says flags only account for about half of the company’s business, as the other half is custom work they do of print on fabric, such as banners and advertising. Some of the major clients that have come on board since Skipp and Naish took over include the Toronto Blue Jays and the Winnipeg Blue Bombers.

The flag business has also been affected by COVID-19, with many Canada Day festivities locally and nationally either going virtual or being cancelled altogether.

However, Skipp noted there has been a considerable uptick in Canadian flag sales throughout the pandemic.

“Our sales manager – who is planning on retiring soon – he likes to say, ‘People buy flags in triumph or tragedy',” said Skipp. “The inability (right now) of people to buy flags in stores or get out for Canada Day festivals, people aren’t going to be out this year waving a flag. We’ve probably lost a bit of that (business), but it’s been compensated by people generally wanting to own a flag through the tragedy part.”

The custom side of the business has also been affected with many trades shows, sporting events and festivals being cancelled.

“We’re hoping it comes back when we get out of this pandemic,” said Skipp. “We’re hoping we’ll get some of it back with the events that have been postponed until later.”

While the business can sometimes be sombre, especially when flags are being purchased to honour a tragedy, the patriotism shines through for Skipp.

Neighbouring Bradford has no active COVID-19 cases
Aug 13, 2020 2:23 PM
Comments
We welcome your feedback and encourage you to share your thoughts. We ask that you be respectful of others and their points of view, refrain from personal attacks and stay on topic. To learn about our commenting policies and how we moderate, please read our Community Guidelines.