Theatre Aurora delves into its history after 'ghostly' encounter

'About a week ago, I was in the building and felt there was something so very strange going on here. It is not like when you walk into a cold room; it is more of a full-bodied tingle that something very strange is going on, especially in certain parts of the theatre itself.'
Apr 4, 2021 8:00 AM By: Brock Weir, Local Journalism Initiative reporter 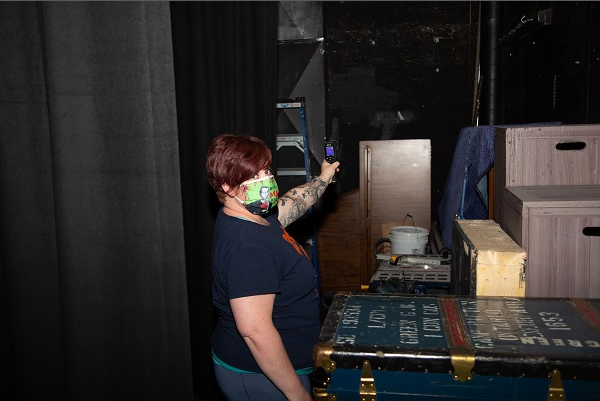 Adam has been rather lonely since the start of the global pandemic.

With his door closed to visitors, his days have largely been spent in silence, but when he does have company, he can be a bit of a rascal.

It’s anyone’s guess at just how long Adam has been experiencing these pangs of loneliness, but if you’re a believer, it started well before COVID-19.

Adam got some companionship, albeit temporary, last month when members of Peterborough Paranormal accepted Theatre Aurora’s invitation to come to their Henderson Drive building to look further into ghostly apparitions and spooky encounters all too familiar to stage veterans.

Director of operations Steve Knoxx has been on site for the last few months working on renovations at the building, which started out life as a cement factory. Knoxx says one experience in the theatre’s dressing rooms left him almost with a feeling of dread.

It was uncomfortable and draining, he says of the experience. It also left him with questions, one of which was partially answered just days later by board member Neill Kernohan who asked, “Have you met the ghost yet?”

“I didn’t know why he would say that to me, I was freaked out as it is!” says Knoxx with a laugh. “He said, ‘I’m not going to say anymore. We don’t like to talk about it.’ No big deal. It went on and on like that for months. About a week ago, I was in the building and felt there was something so very strange going on here. It is not like when you walk into a cold room; it is more of a full-bodied tingle that something very strange is going on, especially in certain parts of the theatre itself.

“The house lights are up and there is something on stage and ‘snap’ it’s gone. It was faster than my eyes could follow it. There was no sound and I wondered whether I had imagined it or not. It was midday, dead quiet and I saw this thing running across the stage. That’s it – I’m gone I’m not doing anymore work today.”

In some respects, the work was just getting started. Knoxx decided to pursue the matter further and, with the support of the board, he reached out to Mandy Rose of Peterborough Paranormal who jumped at the chance to dig deeper into the case.

“With COVID, I haven’t been able to [do these investigations] in a year and when the opportunity came up, it was a yes,” she says. “It is something I take seriously. I have always had a fascination with the paranormal, even going back to when I was a little kid. Where it comes from, I have no idea. It might be a history thing, but from what I understand there were psychics in our family and I guess it is just in my blood. I got the gene!”

With her fellow investigator Sam by her side, they came to Theatre Aurora with the equipment necessary to get to the bottom things. In addition to their cameras, their bag of tricks included a “ghost box” which picks up on frequencies in the room.

Rose stresses that she is not a medium; rather, she describes herself as an empath in that she can’t see ghosts, or hear them. Instead, it’s their energy she can feel and the tools do the rest.

“When we went backstage, I didn’t pick up on the little boy; I immediately picked up on this grumpy old guy who was perturbed by us being there, almost invading his space,” she shared. “At one point, Steve was showing me the rooms and I hear, ‘Looks like s---!’ I didn’t think it looked like s---, but this grumpy old guy in my head did. He kind of left us alone and after that, it was the kid.

Upon further investigation of the recordings they made on site, they found the child’s spirit identifying himself as Adam with the date 1896 cropping up frequently on the track. Further questions revealed the boy as Adam, a child who liked horses and was “quite lonely” in his own words.

To help ease his loneliness, the team left a small toy horse to play with should the mood arise.

In the meantime, it’s a matter of trying to figure out who Adam might be.

Theatre Aurora is now working with the Aurora Museum & Archives to paint a fuller picture on the history of the Henderson Drive lands and if there is any evidence of eight-year-old Adam – or even the grumpy old man – somewhere in history.

They are aware the investigation could open up the door to skeptics, but that is not a concern for either Knoxx or Rose.

“When we were talking to Adam, was that a scary experience? I don’t think so. It was just a regular conversation. I do what I do because I love it, I’m interested in it. I am not here to prove to the skeptics.”