The layoff of 97 nurses was a top concern of community members who took part in the Newmarket hospital's virtual town hall last night
Oct 8, 2020 1:56 PM By: Debora Kelly 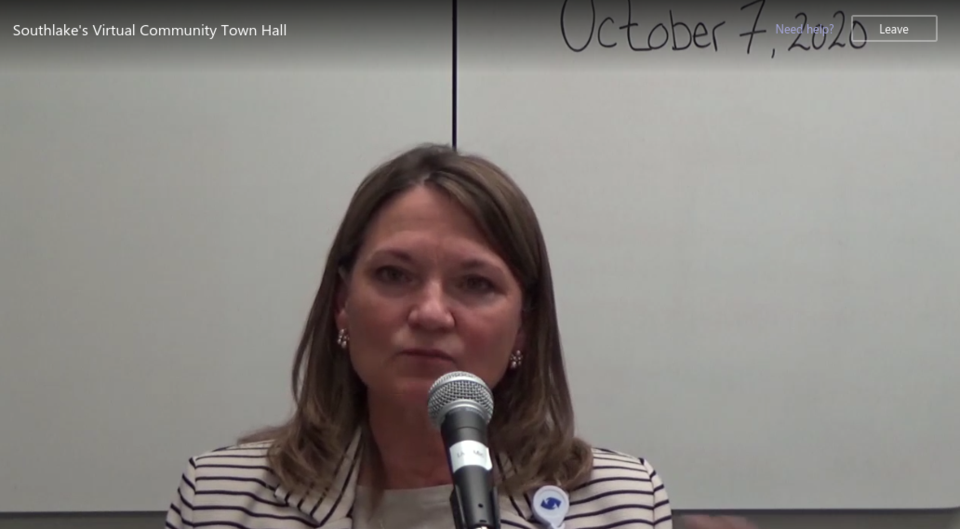 While the layoff of 97 registered nurses announced as the second wave of the COVID-19 pandemic gears up is “unfortunate, for sure,” all other options for cost savings had been exhausted for the deficit-ridden Southlake Regional Health Centre, according to its CEO during a virtual town hall last night.

The majority of questions from the community during the Oct. 7 event concerned the Newmarket hospital’s Sept. 22 announcement, which drew heavy criticism both from the Ontario Nurses Association and the community.

“How does Southlake get in such a position that they have to lay off nurses?", was the first question posed by a viewer, followed by several others who said they were “saddened” and “disturbed” by the layoffs.

“I’ve been asked the question on multiple occasions, ‘Why would you do this now? … Why would you lay off nurses during a pandemic'?" Arden Krystal acknowledged.

Southlake started this fiscal year with a $17.7-million deficit on its $450-million annual budget, Krystal said, and faced a further shortfall of $18 million to $20 million if further savings weren’t found this year to deal with rising costs.

“But as you can imagine in a budget this big, and where the vast majority of the budget is people, it is really hard to find that kind of money without eventually having to get to the frontline, and that’s unfortunate, for sure — it is not anything I, or anyone else, want to do,” she said.

The layoffs are anticipated to result in $9.5 million in savings.

“We very first looked at the things we could do in management to be able to reduce costs,” Krystal added.

Last year, 12 administrative positions were cut, and this year, 34 management and administrative clerical positions have been reduced, and smaller efficiencies were found in changing processes such as scheduling and dictation required by physicians.

About $6.5 million was cut through attrition and reductions in non-union staff, Krystal said.

“The timing is really around a cash flow, we just didn’t have any other sources to be able to make up for another $18 (million) to $20-million deficit on top of one last year. And so, for the people who do work here, they need a paycheque, and I need to be able to pay them,“ she said.

“From a timing perspective, I agree it was less than ideal, but we didn’t have a lot of choices.”

As well, under the collective agreement with the ONA, Southlake is required to give five months of notice for layoffs.

“I can tell you that no one has left the building since Sept. 22, and no will for some time,” Krystal said.

The notice period allows nurses to decide to retire early, or apply for vacancies in units where registered nurses are required, such as the ICU, where additional training would be provided.

Southlake has added additional registered practical nurse positions, as it prepares to adopt a new model for nursing staff based on their skills and abilities, she said.

“We do know that the model change that we’re making in terms of the nursing team and of the care team has been done by many other hospitals across Ontario some time ago and it seemed like we couldn’t delay that anymore,” Krystal said.

Responding to a question, chief of staff Dr. Steven Beatty said he is not aware of any concern among physicians about the reduction in registered nurses because they will continue to staff the areas where patients require a high level of care, such as the ICU, post-op and emergency.

Krystal emphasized that the majority of Southlake’s operational revenue is provided by the provincial government, bolstered in small part by revenue from parking, cafeteria and gift shops.

There are “very logical reasons” for the inability to balance the budget in 2020, she said, mostly because of the “incredible sustained growth” over the last few years.

Since 2014, Southlake’s bed base has grown from 413 beds to today’s 503, she said, however, the provincial government’s funding formula has not kept pace with the growing costs.

It takes 30 to 40 per cent more “to actually run those beds,” she added, creating a structural deficit for the hospital.

As well, a large loan was required to update the IT system for electronic patient records.

The current budget reflects more than $9 million in incremental costs when compared to the 2017-2018 budget, she said.

Following a third-party review, Southlake is currently in the process of requesting the province for an adjustment to its base budget, which will be concluded Oct. 23.

As a result of Southlake’s “low working capital ratio”, the “rainy day fund” for unanticipated costs is reasonably low, “so to postpone savings until COVID is ended could put us in position where our cash flow is very low, and that could actually erode my ability to be able to pay people’s paycheques.

“We really needed to do what our job is, and that is to look at all of the money that comes in and all of the expenses and try to make the best decisions,” she said.

The master plan that outlines Southlake’s ambitious expansion to meet the future needs of the community was also discussed.

“We need to have a major, major capital build here at Southlake to be able to prepare ourselves for the future. We just simply will not be able to survive as a hospital, given the population projections, without a lot of expansion,” Krystal said.

About 700 to 800 beds will be required to meet the anticipated growth.

The need for expansion can’t be met on the current “land-locked” campus on Davis Drive, she said.

The hospital that was “built in bits and pieces” is currently ill-equipped to handle the burgeoning numbers of patients, and doesn’t meet today’s specifications for an efficient hospital, including infection control, and space and lighting for patient and operating rooms.

“To give you an idea, when we’ve been going through our master planning, at today’s specifications, just to do the same work that we’re doing right now, we would need over 80 per cent more space,” Krystal said.

“We’ve been trying to make do in a very small spot,” she added.

The plan includes obtaining another site for an acute care tower, while the existing campus would be repurposed as an integrated ambulatory care centre for geriatric, mental health and cancer care.

“We don’t have the exact plot of land yet, although some people have come forward to say, you know what, if you get this approved, I think I might have a plot for you,” Krystal said. “And, of course, we’re looking at areas that are at good adjacencies to the current site because we would have some back and forth.”

The master plan has been endorsed by the Central Region (formerly the LHIN) and has been submitted to the provincial government to be included in its 10-year capital plan, however, even if the plan is approved, the timeline for a new building would be eight to 10 years in the future, Krystal said.

“We are working very hard to have all of the meetings and do the education to make sure our elected officials and the community really understand the impact of the capacity pressures that we have on us right now, and the need for a new development for Southlake.”

'Completely irresponsible': Union slams Southlake for laying off 97 nurses during pandemic
Sep 22, 2020 6:32 PM
Comments
We welcome your feedback and encourage you to share your thoughts. We ask that you be respectful of others and their points of view, refrain from personal attacks and stay on topic. To learn about our commenting policies and how we moderate, please read our Community Guidelines.