'It's not something that you would ever get over because it's always going to be part of your story now,' says local International Survivors of Suicide Loss Day event organizer, who notes it's essential to get help and support
Nov 20, 2020 5:43 PM By: Andrew Philips 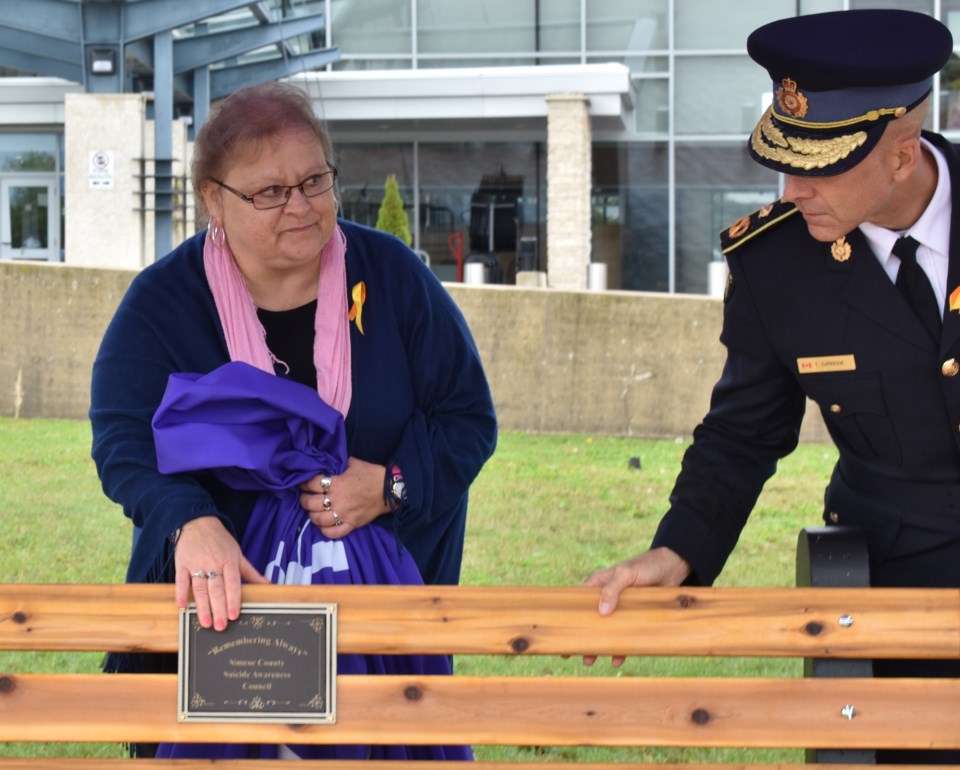 Bernadette Copeland and OPP Commissioner Thomas Carrique look at a bench and its plaque - which says 'Remembering Always' - that was unveiled at OPP General Headquarters last year. File photo/Village Media

While it's something that was rarely discussed years ago, the stigma surrounding suicide remains even now.

“It's very, very difficult for people who are left due to the stigma,” Copeland said, adding that the suicide or attempted suicide of someone close can create a very long and deep grieving process.

This Saturday, the council hosts a free virtual event to help individuals reflect and cope with suicide as part of International Survivors of Suicide Loss Day, which is held simultaneously around the world to help people find comfort and gain understanding as they share stories of healing and hope.

This marks the group’s first foray into a virtual program, but Copeland still expects it will provide people an opportunity to talk about some of their fears, triumphs and how they are coping with the loss or attempted suicide of someone dear.

The survivors' day started in the United States and is purposely held annually on the Saturday before American Thanksgiving, which in turn, starts the big lead-up to Christmas.

And Copeland said that can be an especially difficult time for those feeling lonely or depressed with fears mounting that this year could be even worse with the COVID-19 pandemic picking up strength.

Saturday’s regional event starts with an introduction followed by a short video and finally a discussion where participants can talk about their loss, coping strategies and the need to never give up hope.

“It's not something that you would ever get over,” Copeland said, “because it's always going to be part of your story now, but this is a day for people to come together.”

Copeland said that while some might be experiencing very recent losses, other participants might be years away from their loss and can offer solace and help on how they got through it.

“You know, they're in a room with other people who get it. And they've all had suicide loss. So it's a place where people can come together and just know that their feelings are normal, they're not going crazy with all these feelings that they have, which are all mixed up and all over the place.”

And Copeland knows of which she speaks, having lost her sister, Phyllis, 39 years ago and her best friend, Karen, in 2009.

“With my sister it was the first time I'd had anything to do with suicide,” she recalled. “It was just a word in the dictionary that really wasn't something that I paid a whole lot of attention to.”

So when it happened, Copeland said she was filled with guilt, shame and blame.

“I really had a hard time reaching out to people and when I did, the very few times, it became very clear to me that they didn't want to talk about it. They didn’t know how to help me.”

Fast forward years later and the experience was much different, according to Copeland.

“When my best friend died, I dealt with it totally differently,” she said. “I'd learned a whole lot between those two losses.”

For one, she didn’t stay alone with her grief, but immediately sought help and found support from her peers.

“So even though the loss was horrendous, and incredibly difficult, I dealt with it differently. I talked to people who get it. There's no shame, there's no stigma and that is so refreshing for people. Being able to come and talk to someone who has experience with suicide is really helpful.”

An estimated 4,000 Canadians die by suicide each year, with 11 people dying each day. It also remains the second-leading cause of death for people aged 15 to 34 after car accidents.

But Copeland said it can be difficult to arrive at a firm number since deaths reported as drug overdoses or single-vehicle accidents might also be the result of suicide.

“It's a public-health issue,” she said, noting women currently account for three times more attempts than men, but men are three times more successful than women at ending their lives since they'll choose more lethal methods like firearms or by hanging.

Copeland also runs a survivors of suicide support program, which was also forced to switch to virtual get-togethers in March.

“We were really surprised since we didn't know if it was going to work or not, but it did,” she said. “We figured that because those worked, doing this (program) virtually will be better than not holding it at all.

About the Author: Andrew Philips

Community Editor Andrew Philips is a multiple award-winning journalist whose writing has appeared in some of the country’s most respected news outlets. Originally from Midland, Philips returned to the area from Québec City a decade ago.
Read more

New winter off-street parking program, draft operating and capital budgets on the agenda for Newmarket council
Dec 4, 2020 4:12 PM
Comments
We welcome your feedback and encourage you to share your thoughts. We ask that you be respectful of others and their points of view, refrain from personal attacks and stay on topic. To learn about our commenting policies and how we moderate, please read our Community Guidelines.