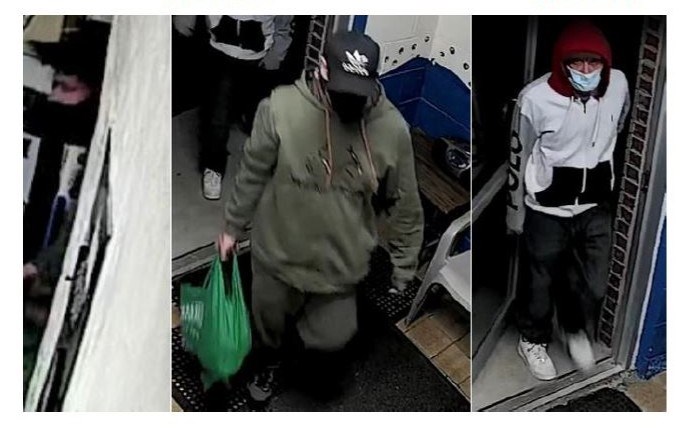 Two suspects were caught on video surveillance in a July 26, 2020 robbery at Main Street laundromat in Newmarket. Supplied photo/Crime Stoppers of York Region

A pair of COVID-mask wearing thieves made off with about $5,000 in cash and coins after a late-night break-in on July 26 at a Main Street laundromat in Mount Albert.

The second suspect stood outside of the main doors and acted as a lookout, police say.

The suspects were in the building between 1:45 and 3 a.m. and were seen leaving on foot on Main Street.

Suspect number one is described as a white male between 20 to 30 years old, with a medium build. He was wearing a green hoodie, grey jogging pants, dark running shoes, black Adidas baseball cap, a black face mask, and carrying a green bag.

Suspect number two is described as a white male between 20 to 30 years old, with a thin build. He was wearing a white-and-black Polo jacket with a red hood, dark jeans, white shoes, and a light blue face mask.

Editor's note: This story was updated on Aug. 18, 2020, to correct the municipality in which The Cleaning Centre Laundromat is located. A Crime Stoppers news release incorrectly identified the business location as Newmarket.

York Region teacher, animal lover lifts spirits by 'abandoning' art around town
Oct 25, 2020 1:30 PM
Comments
We welcome your feedback and encourage you to share your thoughts. We ask that you be respectful of others and their points of view, refrain from personal attacks and stay on topic. To learn about our commenting policies and how we moderate, please read our Community Guidelines.