The first economic statement of Ontario’s Progressive Conservative government announced a reduction of $500 million in the province’s hefty deficit, now at $14.5 billion, a new tax credit for low-income earners and a cancellation of planned tax hikes for small businesses and high-income earners
Nov 16, 2018 3:23 PM By: Debora Kelly 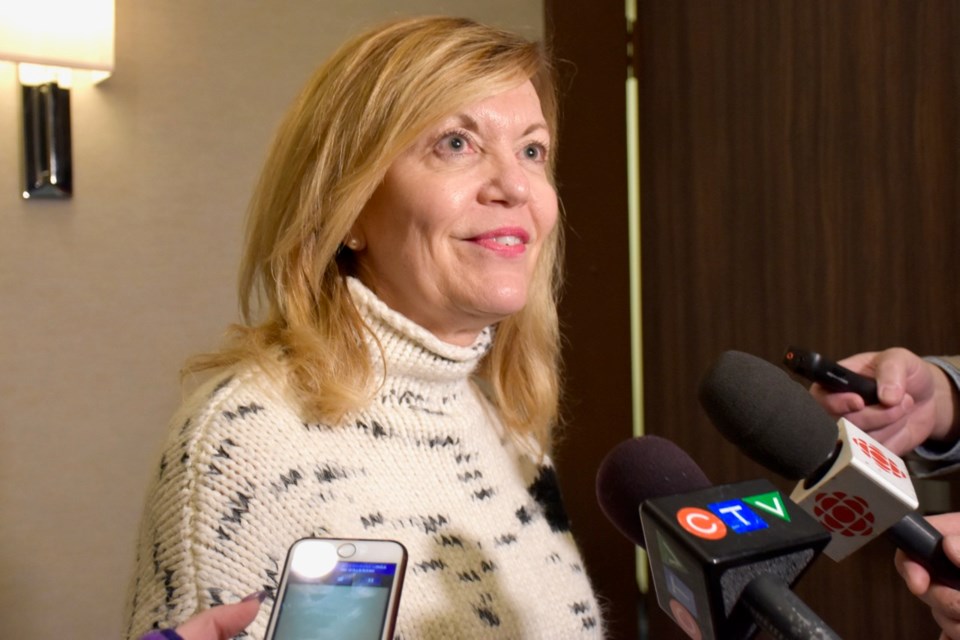 The first economic statement of Ontario’s Progressive Conservative government announced a reduction in the province’s hefty deficit to $14.5 billion, while bringing in a tax credit for low-income earners and cancelling tax hikes.

The government is on the right track to “getting Ontario’s fiscal health back into order”, Deputy Premier and Newmarket-Aurora MPP Christine Elliott told NewmarketToday following the release yesterday of the fiscal plan that provides an update on government finances and announces commitments for the upcoming 2019 budget.

The projected 2018-19 deficit of $14.5 billion is a reduction of $500 million from the $15-billion deficit inherited from the previous government, Elliott said.

“We know we have a long way to go, but we’re headed in the right direction now.”

The Province has saved $3.2 billion — about 2 per cent — in program expenses by finding efficiencies, without increasing taxes or reducing front-line services, she said.

The $2.7 billion was slated to go into the Province’s pockets under the Liberal government, including $308 million in additional taxes for small businesses and high-income earners, as well as from the cap-and-trade carbon tax that has also been cancelled.

The Province is bringing in a new Low-income Individuals and Families Tax (LIFT) Credit that will eliminate personal income taxes for 1.1 million workers across the province, Elliott said.

The PC government estimates a full-time minimum wage worker making $30,000 a year would save more than $800 in income taxes, she said.

“That’s a lot of money to them,” Elliott said. “We have come up with a better way to help people making minimum wage or who have low-income jobs.”

Jessa McLean, Fight for $15 and Fairness spokesperson, told NewmarketToday that the planned tax credit is “nothing but a publicity stunt to fool taxpayers” as the majority of minimum wage and low-income workers do not pay taxes because they don’t have full-time jobs.

Two-thirds of minimum wage earners will see no benefit from Ford’s tax cut because they already earn less than $30,000 per year, McLean said.

The group has been rallying against the government's cancellation of the former Liberal government’s plan to raise the current $14-an-hour minimum wage to $15 on Jan. 1, 2019.

Low-wage workers already pay relatively low taxes, so they are better off with higher wages that directly increase their disposable income, she added.

And while the low-wage workers who do pay tax might save between $800 and $850 annually, she said, they would have instead gained almost $2,000 with a $15-an-hour minimum wage.

“This is a pittance in savings,” McLean said. “It’s unfathomable to live on minimum wage — this does nothing but insult them.”

However, Elliott said, “We see it very differently...We know from businesses that they could not absorb another increase in the minimum wage”, which would have resulted in layoffs and permanent reductions in staffing.

“It’s a balance between people earning a wage that they can live on (and) keeping our businesses in business.”

In a bid to encourage more affordable housing options, rent control has been lifted for new development. Present rent control will be maintained, however.

“What we’re trying to do is create a climate in Ontario where housing is going to grow,” Elliott said.

As minister of Health and Long-Term Care, Elliott said that as well as continuing to work to end “hallway health care” in our hospitals, her key responsibilities include adding long-term care beds and expanding mental health care.

The Province remains committed to spending $1.9 billion in addiction and mental health services over the next 10 years, which matches federal funding for mental health, tallying $3.8 billion, Elliott said.

The Ontario Chamber of Commerce released a statement that, for the most part, applauded the Province’s steps to restore fiscal balance and demonstrate accountability to taxpayers.

“The government’s announcement signals a clear intention to adhere to these principles. We also encourage the government to pursue value-based procurement reform and alternative service delivery opportunities as a means to enhance efficiencies in public spending, encourage innovation, and support small businesses,” the OCC said.

“The Province inherited $347 billion in public debt from the previous government. That's over $24,000 for every man, woman and child — and the debt continues to grow every minute of every day,” Minister of Finance Vic Fedeli said in a news release.

“Interest on debt is the Province's fourth largest expense item after health care, education and social services. It is costing the province more than $1.4 million an hour, or every person in the province almost $900 a year.”

Other highlights from the 156-page document include:

Consolidation of oversight: Three of the Province's independent oversight offices — the environmental commissioner, child and youth advocate and French language services commissioner — are being consolidated into either the existing Auditor General's or Provincial Ombudsman's Offices. Details regarding the anticipated savings were not released, but Finance Minister Fedeli stated the government has vowed no jobs will be cut.

Increasing hours for alcohol sales: Starting Dec. 2, the LCBO and Beer Store will stay open until 11 p.m. seven days a week. As well, sales of beer and wine will be expanded to corner and big box stores.

CANADA: Bullying leads to higher BMI in youth, study suggests
Aug 14, 2020 8:55 PM
Comments
We welcome your feedback and encourage you to share your thoughts. We ask that you be respectful of others and their points of view, refrain from personal attacks and stay on topic. To learn about our commenting policies and how we moderate, please read our Community Guidelines.