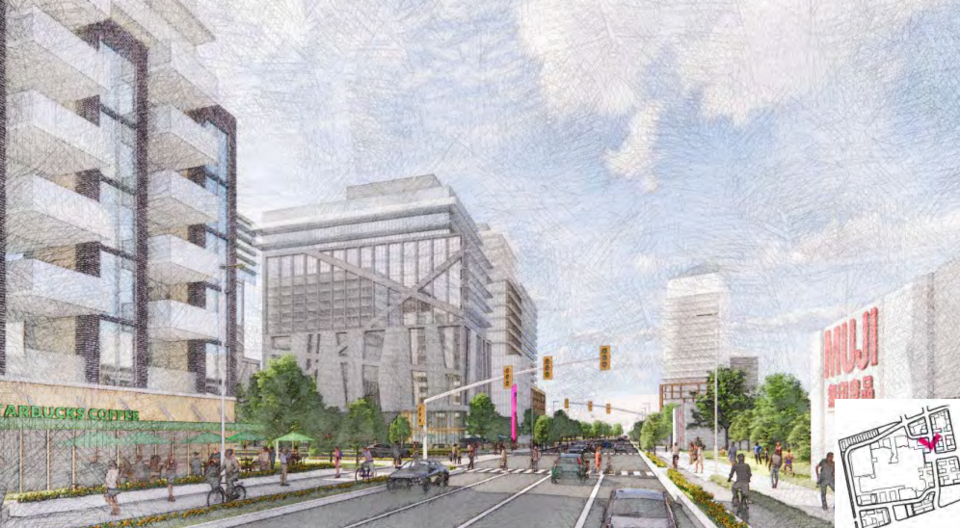 An artistic rendering of a portion of the Upper Canada Mall area proposed for a large-scale intensification.Supplied Photo/MHBC Planning, Urban Design & Landscape Architecture

The owner of Upper Canada Mall is progressing with its long-term development plan that would bring new residents, parks and shopping to Newmarket.

The new master plan for 77 acres surrounding the mall at Yonge Street and Davis Drive could add 5,100 residential units, 1.8 hectares of new public parks, 4,500 parking spaces above and below ground, as well as a new road system.

MHBC Planning and Urban Design Architecture presented to council at its June 21 meeting, on behalf of mall owners Oxford Properties Retail Holdings Inc., highlighting the vision for a high-density hub offers where people can live, work, shop and play.

The plan includes both residential and non-residential structures, street layout, as well as parks. The existing mall would remain in place, for incorporation into the new neighbourhood. The development would take a phased approach, which would take more than 30 years to complete.

Oxford’s Cory Estrela said the plan will bring the community closer to the mall area.

“The master plan is about reinforcing and supporting, in many ways, the mall,” Estrela said.

The plan, which has been in the works since 2017, began at the behest of the municipality to aid in long-term planning, and would include corresponding amendments to town plans.

Deputy Mayor Tom Vegh asked about how shopping trends, such as the increase in online buying during the pandemic, might impact the plan in the future. He said within the plan, the mall size has remained about the same.

MHBC partner Oz Kermal replied that although the trends will likely impact secondary malls and neighbourhood plazas, while the impact on larger centres will be less.

“These are all regional centres where you have a lot of the higher end retailers. I think you’re going to see they’re going to remain for the most part,” he said.

Councillor Christina Bisanz asked about the control of the residential areas, and whether they might be sold for condo development or remain within the ownership of Oxford “so there's some continuity about property management and property standards.”

Estrela replied although there may be some condos in certain blocks, the plan is to have the majority of residences be purpose-built rental.

“There’s no intention to sell it all off in parts,” Estrela said.

The presentation was part of a public hearing, though no members of the general public spoke on the topic. Council made no decisions at the meeting, with a future report to come back at a later date based on feedback.

Residents can make deputations on the report in the future, or provide written comments for consideration, by messaging clerks@newmarket.ca. The developers also did a public meeting on the proposal in April.

Mayor John Taylor emphasized that this is a long-term plan that will not result in any imminent changes.

“This is a vision of a site’s development over a 35-plus year time span,” Taylor said. “It’s good to know what everyone’s thinking.”