A sophisticated, synthetic drug network primarily funded through the illicit cultivation and sale of cannabis, along with the criminal organizations behind it, have been shut down, York Regional Police announced today
Aug 8, 2019 1:55 PM By: Kim Champion 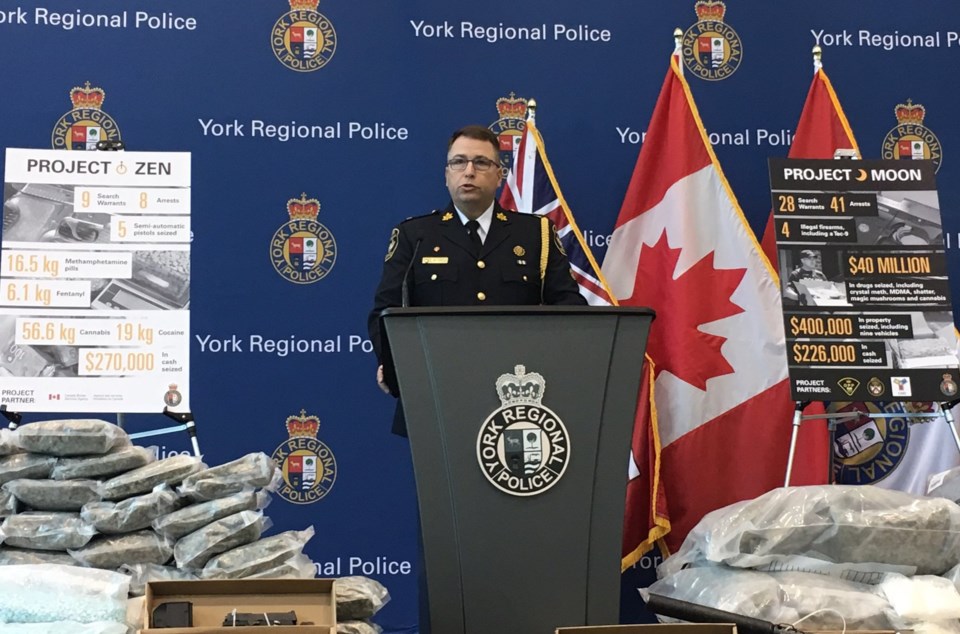 A sophisticated, synthetic drug network primarily funded through the illicit cultivation and sale of cannabis, along with the criminal organizations behind it, have been shut down, York Regional Police announced today.

Two separate investigations, dubbed Project Zen and Project Moon, resulted in the seizure of about $45 million in synthetic drugs such as fentanyl, methamphetamine, MDMA, shatter or cannabis resin, magic mushrooms, along with guns, cash, and more.

As well, 50 people have been charged, weapons that included a Tech-9 machine gun with silencer were seized, along with vehicles and cash. Upward of eight police services, including the Ontario Provincial Police and the Canada Border Services Agency, were involved in the probes.

“Fentanyl is a low cost, but highly addictive synthetic opioid that is having a terrible impact on our communities,” said Slack. “When mixed with synthetic drugs, you can’t smell it, taste it or see it, but it has a terrible and deadly effect.”

Project Zen was a follow-up to a 2018 investigation that resulted in a $3-million synthetic drug seizure in Kleinburg, he added.

Project Moon, a year-long, joint-forces project that targeted a large-scale synthetic drug network with links to organized groups and street gangs such as the Parkdale Crips in Toronto, dismantled a network that police say was responsible for manufacturing and supplying the local community with a wide variety of synthetic drugs.

Hundreds of pounds of cannabis were being supplied daily for sale on the illicit market, police say, and none of it was going to legitimate licence holders.

“Instead, it was financing the synthetic drug trade here in York Region, which our investigators have successfully dismantled,” Slack added.