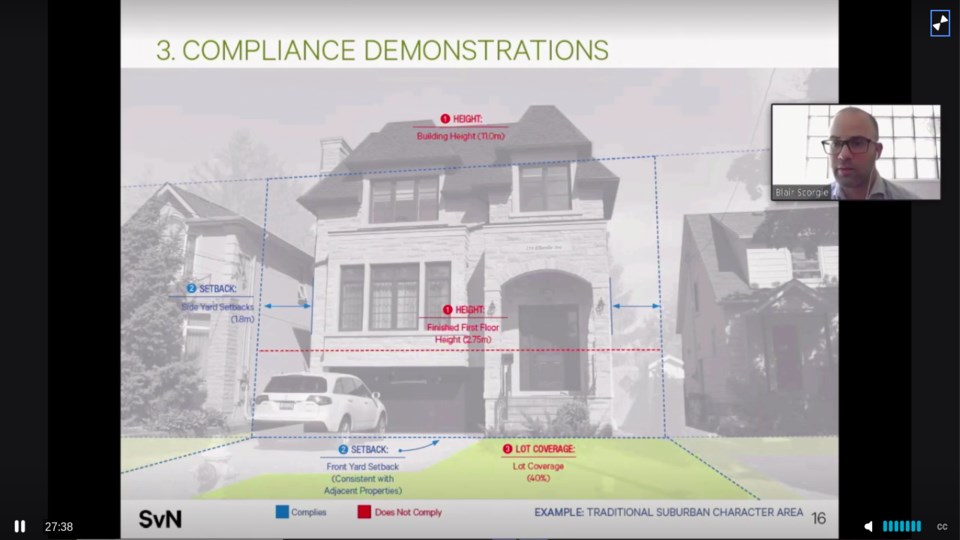 This is an example of a so-called monster home that would not comply with new rules and regulations expected to be in force later in 2020 in Newmarket. Consultant Blair Scorgie of SvN updates council on Sept. 22, 2020. Supplied image

After more than a year of consultation, new rules and regulations are nearing the finish line that will effectively outlaw so-called monster home development in Newmarket’s established neighbourhoods.

The new town policies that could be approved as soon as the end of October are guided by a study that examined and identified the unique characteristics and streetscape of local neighbourhoods.

In tandem with that study, town officials put a pause on most infill development with a measure known as the interim control bylaw. That will be lifted once new policies are in place.

An upcoming report is expected to put forward final recommendations for council’s consideration about the type of new home that can be built on a single lot, as well as additions to existing residential houses within those neighbourhood areas.

Reforms to existing height restrictions, lot coverage, and setbacks are all up for consideration and would vary depending on a neighbourhood’s character, for example. These changes would require amendments to the town’s official plan and zoning bylaw.

The proposed new regulations would also limit the ability to sever lots to a certain extent.

“The goal of this project is ultimately to deliver new official plan policies and zoning regulations that are intended to ensure greater levels of compatibility between new residential developments and their surrounding neighbourhoods,” acting director of planning and building services Jason Unger said Tuesday at a special council meeting on the subject.

While the new rules effectively shut the door on monster homes, there is expected to be a degree of latitude built in to provide homeowners options on such things as rebuilding, redesigning, and renovating as long as the character of the surrounding neighbourhood is not jeopardized.

“Part of what we’re doing is that we don’t want to stop redevelopment or the option for homeowners to take houses down and rebuild completely, we don’t want to eliminate people’s options or discourage a natural and positive turnover of some built form,” Taylor said. “But we do not want to have cases where homes are so large and just completely out of place or so impactful to the neighbours that they almost don’t want to live there anymore.”

Newmarket council agreed that new policies around infill developments should be more restrictive, but not be applied as a blanket set of rules for the entire town.

“People will have to be more cautious and thorough and look even closer at their additions or new builds, and say, ‘What are the rules in my area’?” Taylor said. “We don’t want to make sure every home in Newmarket is modest and small and doesn’t offend anyone. We’ve got to accept some latitude for individuality and unique design, and there’s a lot to be said for seeing different built forms and types and sizes of homes.”

The final report of the established neighborhoods compatibility study and policy recommendations is expected to come back to council on Oct. 26.

The public can still submit their feedback via email at clerks@newmarket.ca

To read highlights of the study, visit here.

End in sight for Newmarket's hot-button temporary building ban
Jul 20, 2020 5:40 PM
Comments
We welcome your feedback and encourage you to share your thoughts. We ask that you be respectful of others and their points of view, refrain from personal attacks and stay on topic. To learn about our commenting policies and how we moderate, please read our Community Guidelines.