Newmarket sinks in 'best of' ranking. Is the sky falling?

OPINION: Like being nominated for an industry award, it's wonderful to win. But if you don't, it doesn't mean you're not doing a good job
Aug 12, 2019 1:45 PM By: Kim Champion 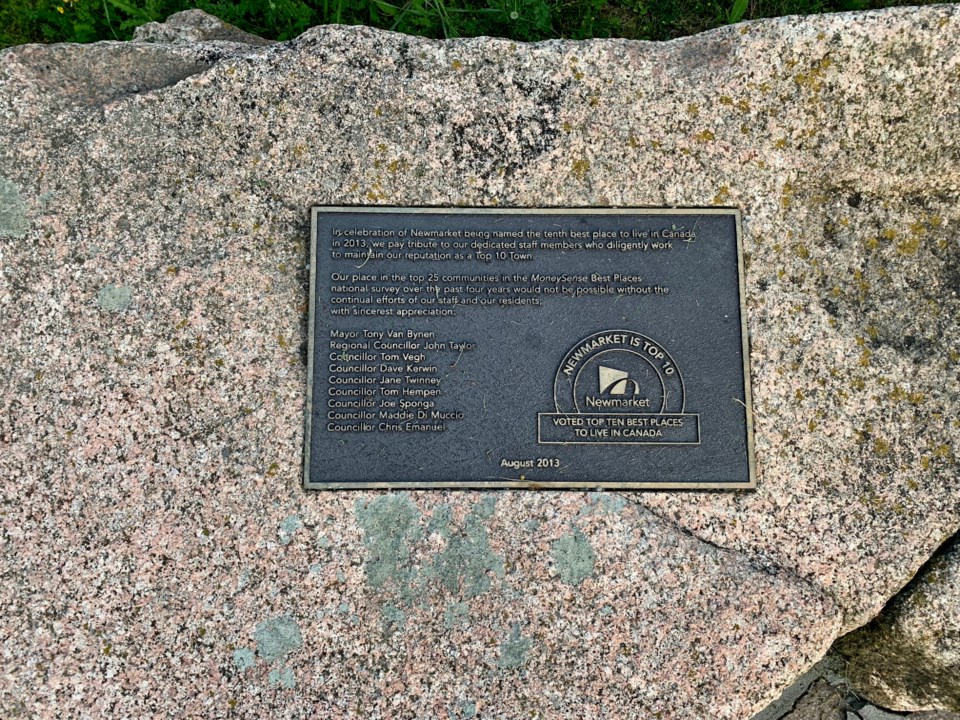 The plaque installed by the Town of Newmarket to celebrate it being named in 2013 the 10th best place to live in Canada by MoneySense magazine. Debora Kelly/NewmarketToday

Newmarket’s ranking on a 2019 national best-places-to-live list imploded like a bad souffle last week, after a decade of bragging rights to cracking at least the Top 25 best communities in Canada for many years running.

It is a mantle to which local politicians proudly cling, and they shouldn’t be faulted for that. Being named on a “best-of” list can provide a marketing boost that money can’t buy.

The Town of Newmarket has issued self-congratulatory news releases each time it was named one of Canada’s best, and even installed a plaque on the Tom Taylor Trail after it was crowned in the Top 10 in 2013 by MoneySense magazine's annual Best Places to Live list.

But as these annual special project editors see it, Newmarket is no longer worthy of such a distinction.

The town has been knocked down to 93rd place out of 415 cities and towns across the country in an evaluation based on 10 categories, such as low crime rate, access to health care and wait times for various treatments and surgeries, culture and sense of community — which, it’s worth noting, Newmarket is tops in that order.

Maclean’s magazine staff, with input from data analytics firm Environics Analytics, took its first stab at measuring what it believes are things that contribute to quality of life in a community to produce the perennial edition, now known as Canada’s Best Communities 2019.

You may recall from years past that this dispatch on the vibrancy of our communities was known as the MoneySense Best Places to Live in Canada report.

But in late 2018, Rogers Media sold its MoneySense brand to Toronto-based online personal finance website, Ratehub. Then, in 2019, as Rogers continued to shed its media properties, Toronto’s St. Joseph Communication, publishers of Toronto Life and others, acquired Maclean’s.

The Canada’s-best communities report is no doubt a massive undertaking and is consumed by people curious to know more about how a given place — particularly their own — stacks up in terms of how many doctors are practising in that community, property tax rates, average household net income and worth, economic growth, the regional level of unemployment, and even the total number of days in a year when the temperature soars past 20C.

Who knows, young families or retirees may take the report into consideration when looking for a new community in which to lay down roots, and businesses considering a new venture or location surely peruse the ranking.

Newmarket’s now-miserable standing leaves one wondering if the sky is falling.

“No, not at all,” said Newmarket Mayor John Taylor.

“From last year to this year, I don’t think Newmarket has changed much, except for the better,” he said. “We attracted and landed one of the largest companies in Canada, Celestica, in a competitive process with multiple municipalities, and they still chose Newmarket.”

“We’re not any different, if anything, we’re a little better than last year in terms of where we stand,” Taylor said, clearly baffled at the town’s significant shift downward when little has changed in the data points used to rank the community from last year to this.

Taylor and town officials have reached out to Maclean’s and Environics to better understand the ranking process and its data sources. Good for them, because lists of this nature can impact a community’s reputation, for better or worse.

“There are some very significant shifts from last year to this year, much more than we’ve ever seen before, and not just with us but with others,” Taylor said.

He pointed to the Niagara-region town of Grimsby as an example, which went the other way on the list. It jumped to the second best community in Canada this year, up from 83rd place in 2018.

“How much has Newmarket or Grimsby changed in a year?” Taylor said.

It’s a good question and one that helps to put “best-of” lists into perspective. Like being nominated for an industry award, it’s wonderful to win. But if you don’t, it doesn’t mean you’re not doing a good job.

If nothing else, Canada’s-best rank gives us all plenty to think about. Is there room for improvement in our community, are there things we could be doing differently?

Newmarket residents have already weighed in on social media, with one commenter asking: “Can we talk about housing/rent affordability here? Will the homeless crisis ever be solved?”

Town hall critics, too, were quick to pounce: “Wondering if we will see banners celebrating 93rd place on Main Street in Newmarket?”

The first-term mayor himself,acknowledges there are always things on his own list he’d like to improve: traffic flow through town, transit, attracting new businesses and jobs, and even working toward finding external partners to bring a post-secondary institution to town, or perhaps a new innovation centre.

“We have an incredible hospital in Southlake Regional Health Centre, it’s our greatest asset. Upper Canada Mall is one of the best malls in the GTA. We have an incredible trail system, the Magna Centre, Riverwalk Commons is the crowning jewel, and we’re not stopping there,” Taylor said. “We’re building out Mulock Estate into a park in the next two or three years. We’re always looking at ways to improve.”

There’s nothing we can do about our rank of 93rd best community in Canada in which to live.

But instead of grumbling, we could consider becoming more involved in the local community, contributing positively to the issues about which we are most passionate, and offering imaginative solutions that would make Newmarket tops for all its citizens.

What are your ideas to keep Newmarket’s momentum moving forward?