'We were told there were no cuts being made and we were listening to the media who were misinforming us', resident says
May 3, 2019 5:30 PM By: Kim Champion 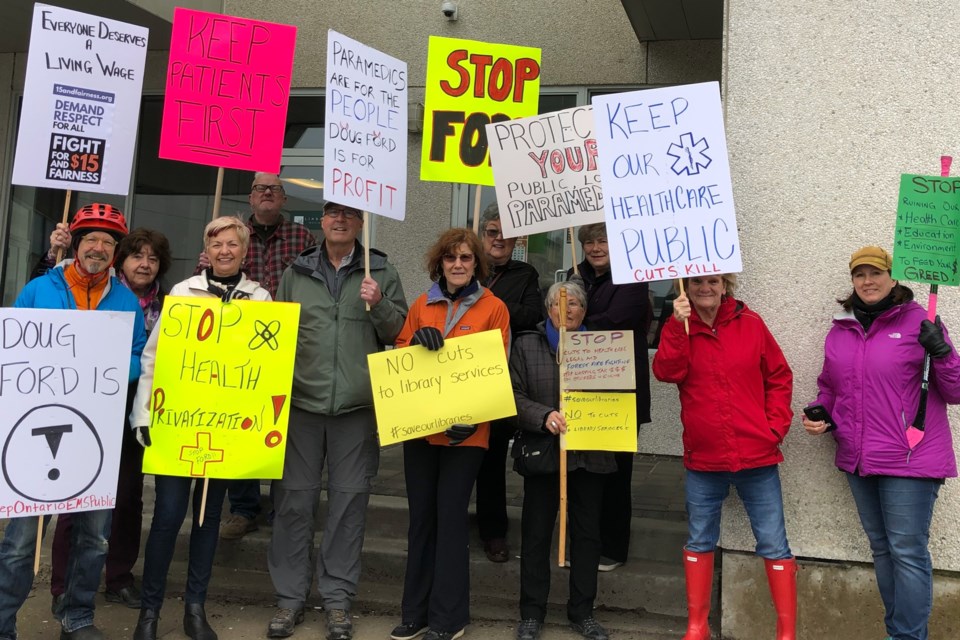 A group of concerned Newmarket citizens demonstrated in front of Newmarket-Aurora MPP and Deputy Premier Christine Elliott's office May 1, and plan to do so every Wednesday to voice their concerns about the Ford government's cuts to health care, education and the environment, organizers say.

Elliott was not in her constituency office that day but, in speaking with a staff person at the office in the Nature's Emporium plaza at Yonge Street and Mulock Drive, the residents said they were told their concerns were unfounded.

"We were told there were no cuts being made and we were listening to the media who were misinforming us," said Nicole Gaudet, who was at Wednesday's protest.

After another resident went into the office to ask about cuts to the Environment Ministry, all the protesters were locked out, Gaudet added.

"We were not allowed back in to ask more questions," she said. "Clearly, if you are not willing to swallow their version of events, you are not welcome into the constituency office of Christine Elliott."

A spokesperson for Minister Elliott said staff invited the Newmarket residents into the constituency office in an effort to engage in a meaningful discussion.

"When it became clear that they were not interested in a productive discussion, we thanked them for their time," spokesperson Hayley Chazan told NewmarketToday. "The individuals decided to leave on their own accord. As always, we are happy to meet with and talk to all constituents, so long as these conversations remain respectful.”

Chazan said the Ford administration "is taking a responsible approach to balancing the budget that restores confidence in Ontario’s finances, while protecting what matters most – our world-class health care and education systems".

"We are investing a landmark $1.6-billion in teacher job protection. This funding will make sure not a single teacher will lose their job as a result of our proposed changes to class sizes or e-learning. Through the budget, we recently announced that we are investing more in education in 2019-2020 than the previous government committed for 2018-2019," Chazan added.

Province reduces deficit, cuts taxes
Nov 16, 2018 3:23 PM
Comments
We welcome your feedback and encourage you to share your thoughts. We ask that you be respectful of others and their points of view, refrain from personal attacks and stay on topic. To learn about our commenting policies and how we moderate, please read our Community Guidelines.