Newmarket moves quickly to crack down on short-term rentals 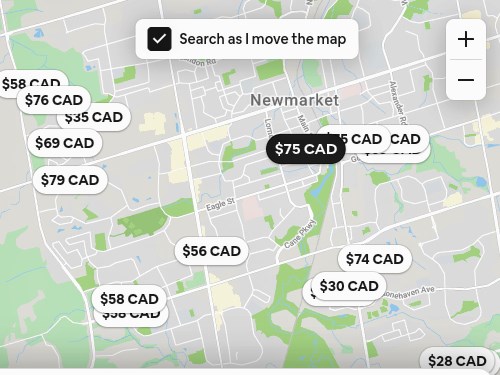 There are 300-plus short-term rental listings on Airbnb in Newmarket on Feb. 4, 2020. Screenshot

Newmarket council on Monday moved to enact a tough new licensing bylaw regulating Airbnb-type rentals that could come into effect as early as May 2020.

This comes on the heels of an Oct. 4, 2019 fatal shooting at a short-term rental house on Colter Street in Newmarket’s Sawmill Valley neighbourhood near Yonge Street and Mulock Drive that sparked calls for action on an industry that is unregulated in the town, and growing to hundreds of listings on online platforms such as Airbnb and VRBO (Vacation Rentals by Owner).

During the hour-and-a-half debate about potential licensing bylaw regulations and zoning amendments that could, for example, allow only owner-occupied homes to be rented short-term to help eliminate so-called party houses, Councillor Kelly Broome voiced her support for acting quickly.

“There is definitely going to be some reasons to do so from my ward,” Broome said, whose constituency was at the centre of last October’s incident that left a 26-year-old Toronto man dead and another wounded. “I was the one that brought this forward and onto the agenda sooner and I’d like to be heard on that.”

While it was acknowledged that more than half — or about 63 per cent — of the 123 people who took part in a town survey called for an outright ban on such accommodations, an approach that balanced community concerns with economic development won the day.

Of the survey respondents, just less than 30 per cent agree or strongly agree that Airbnb-type rentals of 30 days or less should be permitted here.

Of the four regulatory options developed by staff, Newmarket council decided to move forward with a licensing bylaw first for short-term rentals, expected to be in place by May, followed closely by potential zoning bylaw amendments in August.

A licensing bylaw imposes conditions on a business that aim to regulate behaviour at the rental property.

It can include such things as requiring a license to operate a short-term rental, a requirement that the rental operator be available to respond to complaints within one hour of notification, a limit on the number of guests and bedrooms, a “good neighbours” guidebook to arts, culture, and dining in Newmarket, and a demerit-point system that would allow the town to suspend or revoke a license based on number of complaints and charges laid.

Zoning bylaws, on the other hand, can control where short-term rentals are permitted, what types of housing can be used such as condo apartments and detached homes, whether or not the owner must occupy the home, and adequate parking spaces.

Town staff will soon bring a report back to council that includes a draft licensing regime based on local feedback and best practices from other communities.

“Clearly, this is a puzzle and we’re trying to balance various and often competing interests, making sure there’s basement apartments available for people who need them versus the ability to ensure that people can rent for purposes like hospital use or tournaments in town and they rely on Airbnb because hotels are full,” Mayor John Taylor said.

“No matter what, what we’re trying to do here is manage the impact on our residents,” he added. “Most of the concerns I’ve heard from residents are about partying, loud noises, and unfortunate issues of violence.”

According to data obtained by the town, there were 170 short-term rental listings in Newmarket in October 2019, with 55 per cent of listings offering a full house for accommodation.

At the time of publication, there were more than 300 short-term rental listings for Newmarket on the Airbnb platform alone, and almost 40 listed on VRBO.

Councillor Jane Twinney said she has rented Airbnbs while on holidays, and prefers the privacy of renting a whole house where the owner is not on the premises.

“I look at Airbnb for the whole fact that I get a kitchen and a living room and I’m renting a home as opposed to a hotel room,” she said.

But York Region’s near-crisis in housing affordability and options were top of mind for Councillor Christina Bisanz.

“Is it more profitable for a homeowner to have multiple people coming through the house as opposed to a longer-term secure rental of the basement?” Bisanz said. “But we need to be clear that the issue we’re trying to solve here is around safety for existing residents in the neighbourhood, as well as issues around parking and garbage. I would want to ensure that we have effective tools to enable us to control those issues.”

All of council agreed on the urgency to develop rules and regulations around short-term rentals with restrictions to address the community’s concerns.

“To me, it is about the noise, property standards, and the parking,” Councillor Victor Woodhouse said. “It really is about protecting our community. You’re there to enjoy your house, and people fear for their safety because of things that are occurring, and that’s a problem.”

You can read the staff report by the town's regulatory services manager, Flynn Scott, and senior planner Ted Horton, here.

Newmarket shooting about guns and crime, not short-term rental issue, mayor says
Oct 9, 2019 11:40 AM
Comments
We welcome your feedback and encourage you to share your thoughts. We ask that you be respectful of others and their points of view, refrain from personal attacks and stay on topic. To learn about our commenting policies and how we moderate, please read our Community Guidelines.