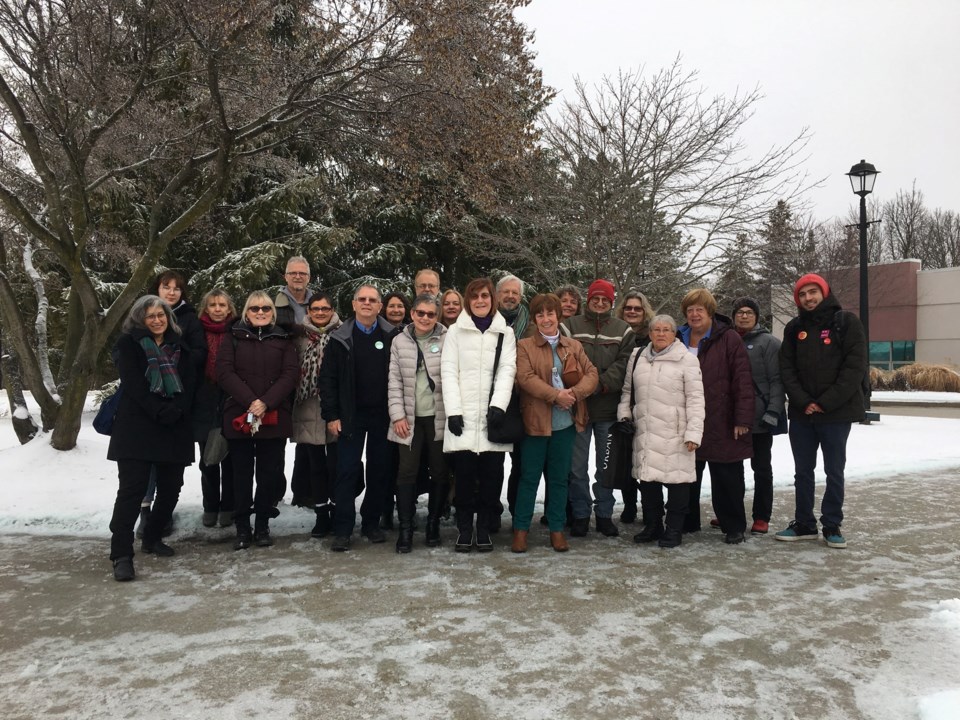 Members of Drawdown Newmarket-Aurora are shown here outside the Municipal Offices on Jan. 13 after the town declares a climate emergency. Supplied photo

Newmarket council on Monday unanimously passed a resolution declaring a climate emergency and received a standing ovation from the nearly two dozen local supporters who came out.

“Thanks go to all who turned out in support, and thanks to our mayor and town council for the work they are doing to make Newmarket a leader in drawing down greenhouse gas emissions,” solutions-oriented climate action group Drawdown Newmarket-Aurora co-founder Teresa Porter said later in an email. "Our Drawdown group achieved one of our goals when Newmarket town council approved a resolution to declare a climate emergency."

It didn’t take much convincing on the part of the newly formed Drawdown group, two of whom made a deputation Monday asking council to declare a climate emergency.

“Declaring a climate emergency ensures decisions on future municipal planning, development and operations will be viewed through the lens of the climate crisis and, right now, nothing is more important than climate change,” Drawdown member Debbie Fletcher-Queen said, who together with member David Kempton presented a seven-page slide show on the issue.

“There is significant opportunity for Newmarket to be a real leader at this critical point in time where we must transition (from) a fossil-fuelled based economy to a sustainable and renewable one,” Fletcher-Queen said. “We advocate for the creation of a local climate action plan that focuses on proven, solutions-based measures, and a strategy that drives civic action,” she added.

Drawdown Newmarket-Aurora was founded by residents Porter and Fran Bazos after the pair attended a few sessions of the Drawdown Richmond Hill group.

Both groups' activities are based on the Paul Hawken book of the same name, Drawdown - The Most Comprehensive Plan Ever Proposed to Reverse Global Warming, which includes contributions from 70 scientists and experts from 22 countries.

Drawdown features 100 ideas that individuals can easily do at home, work or in their communities that help to remove emissions from the atmosphere.

The local Drawdown offered council several examples of changes that residents could make to do their part in helping to reverse, or draw down, greenhouse gases in the atmosphere, ultimately reversing global warming, according to Hawken’s book.

“I’m thinking about food waste, and reducing consumption of a lot of things,” Fletcher-Queen said. “It’s about that basic innate drive to purchase vs just being mindful. Ask yourself, do you really need that, can you scale back. Be mindful of what your needs are, and live more simply.”

“I really have come to believe with the urgency of the situation that we have to (declare a climate emergency),” Taylor said. “It’s good to do a lot of things in many different areas, but we have to go after the big opportunities because the urgency calls for that.”

Two of those opportunities relate to the electrification of the York Region Transit fleet and a potential home energy retrofit program in partnership with other levels of government that have the potential to make a big impact locally, Taylor said.

The program is known as Newmarket Energy Efficiency Retrofit (NEER), and the town is currently undertaking the development of a business case to advance it. The business case will study how a home energy retrofit program could be offered with the goal of retrofitting 80 per cent of the homes in Newmarket over the next 20 years.

The town is also recognized as a leader for several municipal initiatives that include being home to Canada’s first LEED Platinum subdivision for its energy and environmental design, LED lighting throughout the town, and its hydro company was the first to move to time-of-use metering.

In addition, York Region in February will roll out four electric buses on Davis Drive in Newmarket as part of a larger Canadian pilot project, Taylor noted.

Fletcher-Queen acknowledges the town’s positive climate initiatives to date, and said her group advocates for the creation of a local strategy that drives “civic action through community engagement, dialogue, education and promotion, that provides residents of Newmarket with the understanding that everyone has a civic duty to help mitigate and adapt to this climate crisis”.

Here is the Town of Newmarket’s resolution that declares a climate emergency:

Whereas the Intergovernmental Panel on Climate Change on Oct. 8, 2018, has urged the world to reduce the level of greenhouse gas emissions by 45 per cent before 2030 as compared to 2010 to ensure there’s not more than a 1.5 degree increase in global average temperature above pre-industrial levels and to reach net-zero by 2050;

Whereas there’s a need for urgent and transformation action to reduce greenhouse gas emissions to limit global warming to 1.5 degrees to avoid catastrophic climate change;

Whereas climate change is currently responsible for billions of dollars in property damage worldwide, negatively affecting local and international economies;

Whereas climate change will impact human health through increased injury and death from extreme weather and temperature events, and increased rates of vector-borne diseases from a climate more favourable to vectors;

Whereas climate change contributes to poor air quality that will exacerbate respiratory and cardiovascular disease and increased rates of illness through food and water contamination;

Whereas these health impacts from climate change will worsen health inequities by disproportionately affecting vulnerable groups such as seniors and children, those experiencing social or economic isolation, and those with chronic health conditions or disabilities or both;

Therefore, be it resolved that the Town of Newmarket officially declare a climate emergency for the purpose of naming and deepening our commitment to the protection of our environment, economy and community from the impacts of climate change;

The Town of Newmarket officially declare a climate emergency for the purpose of expressing our commitment to reduce emissions across our town, including both the emitors within the town’s control and all those who consider Newmarket to be their community, such that the whole community can benefit from the ancillary opportunities such as economic growth, stimulation in the low-carbon economy, and cost savings which were created by reducing emissions;

And that in response to this declaration, council directs staff to ensure that the Town of Newmarket’s community energy plan is utilized fully as a platform for public engagement and community collaboration in our collective efforts to reduce greenhouse gas emissions.

Council also directs staff to proactively engage our entire staff team to reduce greenhouse gas emissions as outlined in the community energy plan, and present additional opportunities relating to increased greenhouse gas and energy reductions to council as they arise.

For more information on Drawdown Newmarket-Aurora, visit them on Facebook.

For more on the Town of Newmarket's community energy plan, visit here.

Climate crisis focus of election forum for Newmarket-Aurora
Sep 18, 2019 8:00 AM